The Republic of India Divided 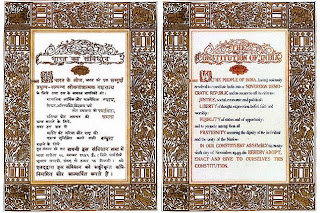 The Republic of India Divided
by Farzana Versey
Countercurrents, January 25
It is rather ironical that the day that is meant to commemorate and celebrate the Constitution of India, an independent India, is creating fissures. The day was specifically chosen because 17 years before we got independence there was a declaration of it against the British Rule. We got rid of the imperial laws to a large extent – not all, since it has taken time for us to come to terms with social issues – but the ruling class mentality remains.

If we were to look at things dispassionately, then there is no reason to celebrate Republic Day because there are laws that continue to make certain that the federalism that we ought to be proud of is now a mere regional and parochial mix. Article 370 notwithstanding, the state governments have treated Jammu and Kashmir as their fiefdom.


Chief Minister Omar Abdullah in his earlier stint would have happily welcomed the BJP leaders to hoist the national flag at Lal Chowk; today, due to his political alliance with the Congress, he peremptorily washed his hands of any problems that it might create. It isn’t the dissidents who were creating an emotional whiplash but the sitting head of government in the state when he said days ago, “What is the need for an individual to hoist the flag? If their aim is to set Kashmir afire, please tell them to stop. If there are repercussions, I will hold them personally responsible. They should not hold me responsible if there is a fallout of that in Kashmir. They will have to come and sort it out. They shall not hold me responsible.”

There is no doubt that the BJP did not do it for the love of the people of J&K. It was a politically-motivated move, but the Ekta Yatra did travel through several parts of India. Their wanting to end it in Srinagar was clearly to send out a message that Kashmir belongs to India.

Omar Abdullah who had already decided there would be trouble had in fact set the stage. The group landed at Jammu and senior leaders like Sushma Swaraj, Arun Jaitley and Ananth Kumar were later arrested. Home Minister P. Chidambaram intervened. We are a Republic because we vest the states with some power. This will clearly give out the signal that Kashmir cannot manage on its own and needs central assistance. It continually permits this sort of interference in matters that can be handled at the state level.

Is this a law-and-order problem? Only if the Abdullah government and the police cannot handle it. How many districts and villages in the state hoist the tricolour on this occasion? The Republic Day is essentially a Delhi Parade where we get to watch the display of our arms and ammunition, the disciplined and symmetrical march by our armed forces and the cultural variety of different states. This has been the tradition and is like any other festival. The states may be coming apart at the seams, but the firecrackers will go on.

The Andhra Pradesh police killed Naxal leader Cherikuri Rajkumar ‘Azad’ in a fake encounter. During the subsequent judicial probe, the Supreme Court issued a notice to the government saying, “We cannot allow the Republic to kill its children.” In today’s edition, the Times of India has passed off an opinion as a report that states: “It displayed the importance the constitutional court attaches to right to life guaranteed to all citizens under Article 21, which says ‘no person shall be deprived of his life or personal liberty except according to procedure established by law’. The expression ‘person’ in Article 21 must include securitymen engaged in anti-Naxal operations in Bengal, Orissa and Chhattisgarh. They too have been killed. Though we can term it as occupational hazard for securitymen, will their mothers, widows and children not question the Republic for their irreparable loss?”

This sounds good on paper and in the papers. Is there a clause that specifically excludes security personnel? Aren’t they honoured posthumously? And why this emphasis only on certain states and a certain ideology? “Procedure established by the law” ensures that those outside the system will be more at risk. This does not in any manner lessen the loss suffered by security forces and their families. It is the job of the government to ensure that they are not dispatched on missions where killing is the only way in which they can move up the ladder. The government must also give them their rights and not involve the innocent in bureaucratic corruption deals or pass feeble judgements against the ones involved in bigger scams.

It is also time to understand that the armed forces are not apolitical. Soldiers have their political sympathies with certain parties and will forward those agendas if they are in a position to do so. If they are not, then they might seek out an outlet when the opportunity arises. The brainwashing and the hierarchy do not make the armed forces over and above politics. It is a political system that works within.

It is pertinent to note that while Naxals have killed security forces, the government does not take into account those killed by their own colleagues, or those killed in encounters in urban areas. The problem the government has is with the idea of dissent. Tribals in the areas of Naxal violence are as much victims. Had the government chosen to ensure that they were protected by the security forces, then people would have empathised with them and seen contemporary Naxalism as a movement that had gone wrong in action, however valid it may be in principle.

As a weapon of protest, boycott is relevant. This is what the villagers of the proposed Jaitapur nuclear power plant plan to do. It is another matter that boycotting Republic day celebrations begs the question about when and how it is celebrated in these villages at all.

However, it exposes the government for what it is – a dalal for foreign agencies that want to park their arsenal here. According to reports, the state government was planning to pay a pittance for fertile land. There are several issues involved: people are attached to the land they till. It is farmland, which feeds millions of people. It takes away income of the locals and renders them homeless. And it compensates them poorly. Is this nuclear plant necessary at all?

Our villages are being cleared to make way for factories and such plants and as the recent price rise and food crisis showed, we will become a nation that imports basics. In a country of 1.2 billion, what exactly are our priorities? To feed people or to play with explosive devices?

Again, this is one-upmanship among states as to who gets a better deal from which firm. There will be kickbacks here as well. The villagers will not benefit.

* * *
Dr. B. R. Ambedkar, the person who formulated the Constitution of India, had said, “For a successful revolution it is not enough that there is discontent. What is required is a profound and thorough conviction of the justice, necessity and importance of political and social rights.”

Rights are now mere rites and vision is through a narrow slat in walls.

For example, what will the Jammu and Kashmir government do about the fact that militants already attacked a checkpost at Sopore and the Lashkar-e-Taiba is planning an attack? Will there be arrests? This is what the IGP Kashmir S M Sahai said: “A three-tier security consisting of inner, middle and outer circles has been laid around the main venue. No private vehicle within the radius of half a kilometer will be allowed to proceed towards the venue.”

Restrictions and added security have all been pushed into action. This is to protect India from itself.
By Farzana Versey at 11:54:00 pm