Taliban and Breivik: Degrees of Madness? 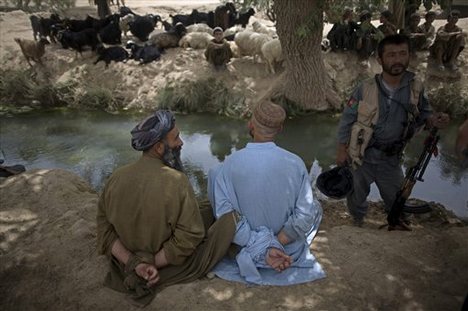 They are not pets that can be domesticated with the clipping of claws and an offering of bone-shaped biscuits. If the British government thinks it can tame the Taliban with an incentive of a $150 monthly stipend, then it is not only fooling itself but also behaving in a characteristically cavalier manner. It has chosen a test group, quite like guinea pigs in a laboratory. There is little difference between the brainwashing that makes them insurgents and this “reintegration” programme that is to ensure the international troops are safe. It is, therefore, not surprising that Nato supports it.
If this is an Afghan process based on the idea of forgiveness, then why are the British forces getting involved? Maj Gen David Hook, the director of the Joint Force Integration Cell in Kabul, said:

“We accepted large numbers of IRA back into our own society because we wanted peace in Northern Ireland and I don’t see it any different in Afghanistan.”

It is. The IRA figured in its immediate environment and was seeking independence from the United Kingdom. Afghanistan is another country and the Taliban was not fighting Britain or the United States. It was not even the Taliban as we understand it now when it was in the long Afghan War with Russia. The West supported it then. There was no talk about getting them to integrate at the time, even though many of them were killed or rendered homeless. As they have been in the past few years.

What “de-indoctrination” are they talking about when foreign troops entered their lands and killed their civilians? There is no doubt that the Taliban fought back, with even greater ferocity. And this is what the outside armies are working on. By discussing amnesty even for the most brutal acts of the Taliban and setting up a corpus of £6.5  million "to deliver peace at the local level”, it will make the families of the soldiers who were killed feel a part of this benign nationalism and also divert attention from the brutalities committed by the troops.

In a smart move, those who opt to join the programme will fill out a questionnaire explaining their reason for joining the insurgency. Many of them are young, so the idea that this is about settling land disputes does not count. It is rightly surmised that those who have signed up may not be real insurgents.

There is also a rather superficial attitude towards the deal, as Maj Gen Hook believes:

“General John Allen (the American commander of the ISAF) talks about three natural ways of leaving the Taliban – killed, captured or reintegrated. The prospect of death is a great motivating force. The insurgents are feeling the pinch after a very effective summer of fighting by Nato. The insurgents know that if they continue fighting they will be killed.”

The Taliban live under the shadow of death. Their terrain is such that they have little choice. Besides, the tribal laws that they have been brought up with would not permit capture. They kill or get killed. They often leave instructions that their colleagues must shoot at them before the enemy does. They do not strategise sitting in pretty offices with video conferencing facilities. The community leaders in Afghanistan are the best people to decide how to integrate them, if at all they are ‘dis-integrated’.

Since the foreign troops are planning to leave, what is the purpose of intruding and wanting the Taliban to return with “dignity and honour”? The Pashtuns are a proud people, and even when they fight amongst themselves, they follow a strict code. Their friendships, and their enmities, are extreme.

Filling questionnaires will not change that.

Just as it took a mere 36 hours with psychiatrists to declare that Norwegian terrorist Anders Behring Breivik was insane when he killed 77 people when he went on a rampage in Norway.

"A psychiatric evaluation ordered by an Oslo court found that the self-styled anti-Muslim resistance fighter was psychotic during the attacks, which means he’s not mentally fit to be sentenced to prison, prosecutors said."

This conclusion, some reports say, goes against the careful planning that went into his attack that killed 77 people.

I had already anticipated it when I wrote then:

The fact that he is seen to have acted alone puts him in the romanticised category of the lone ranger. He has himself said about how it was all “in the head”. They might just analyse it as mental trauma due to seeing so many immigrants around; maybe he suffered from claustrophobia; perhaps he was just playing some video games and decided to re-enact those scenes in real life. It would be attributed to madness. I would like to know why other sorts of such attacks are not. Because, they are not. They are planned and always have a purpose. There is, therefore, no reason to give him the benefit of doubt and to put him on a psychiatric couch only because he was alone. He has already displayed enough gall to declare that he wants to explain his stand.

The psychiatrists have come up with a fantastical theory that describes him as one “who finds himself in his own delusional universe, where all his thoughts and acts are governed by these delusions”.

Right. So, all those who are indoctrinated can be said to suffer from such delusions – of grandeur, superiority of the race/religion/group they belong to, or of the inferiority of others, or are extremely paranoid. Would xenophobic establishments qualify? Are they legally insane when they attack innocents? Are they mentally unstable when they delude themselves into believing that the devil is just round the corner?