“I have never killed a man, but I have read many obituaries with great pleasure.”
- Clarence Darrow
You are waiting, right? Waiting for my anti-Modi tirade, waiting to see me whine, waiting for me to demonise the man who has developed a state. You are waiting… 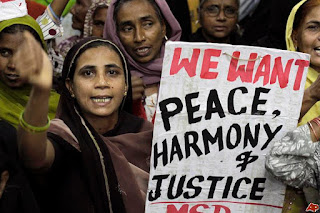 Today, ten years later, instead of asking where is justice, where is remorse (I have stated ever-so-often that remorse is the easy way out), I wonder if things would have been different if Narendra Modi were not in power. Why do I say this? Last night I watched a show on CNN-IBN: United by Grief. There were two unities, two sides.

A group of young IT professionals were asked by Rajdeep Sardesai if they believed in moving on since they thought Modi was a hero? They nodded. Yes. I would have liked to hear those words from their mouths: "Modi is our hero". Why is it assumed?

Would they let this sort of thing happen again? No, they said in unison.

This just gives legitimacy to ‘moving on’, the inheritors of a bright and shining world. Will they live in the state or will they move to another country? Does anyone know? And, more importantly, does the assurance that it will not happen again mean that what has happened in contemporary India under the watchful eyes of the Constitution should not be rectified? I am tired of people being forced to say, “At least there should be some expression of remorse.”

I am not only tired. I am sick of it. It makes my blood boil. On the show, even ordinary people were saying that had the train not been burned down the riots would not have taken place. This is how they have been brainwashed. Then there are the poor, who share the lane and the excreta-ridden toilet, but they cannot forget. Or forgive. There are many lump-in-the-throat moments. Watch it and weep a little.

We are one, is the anthem. But who are the ‘we’ and how do we understand oneness? Anyone wants irony? Here, let me regurgitate a few snapshots.

If you have read some of my stuff before, read it again. 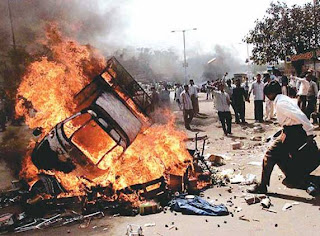 February 27, 2002. Mr. Modi said, “Godhra was not an incident befitting civil society”. Why does he not apply the same standards to his party’s behaviour? Why were Muslims wearing black bands as a sign of protest wrong and the RJN celebrating the conquest of Ayodhya as ‘swabhimaan divas’ (day of self-respect) acceptable? If the attack on the train was pre-planned, then were the subsequent riots completely an emotional outburst? Why was there no rioting on the same day? Why did they wait for the VHP call for a bandh and then go around torching houses and people?


- - -
I have roots in Gujarat, spanning from the port town of Jafferabad to Bhuj in Kutch. Only ghosts walk there. If relatives live, I do not know them. Vaddi Maa (my grand-aunt) was our only link for a long while, a short frail woman who cackled like a hyena. She would send postcards and invariably talk about, “Doodh ketlo gaadho chhe aiyyan” (the milk is so thick here). A young relative had gone on a discovery trip and despite his long hair and diamond stud in ear, he was treated like a king with, yes, huge steel tumblers of milk. Vaddi Maa was dead. When I visited, I had heard that the house was not there anymore. So I skirted that route and looked for traces of myself in other cities where my ancestors may have passed through. I found nothing. I did not feel the pull that I experience whenever I am in Mumbai or returning to it.


- - -
The guy at immigrations was taking an inordinately long time scrutinising my passport, stamped with memories of many countries. He was punching away and refused to look up at me. I could not utter a word. I kept pinching myself to control the anger rising in me. My fate was being decided by an obscure man with the right name and religion. Mine were wrong as he spat out, “Hmmm….Farjaana Var…Var…shee…” and then he banged the book on the table, a document that declared me a citizen of the Republic of India.

Pandey was driving me from the airport. On the way home, I kept looking for signs; it was too dark to read minds. When we reached the flyover, he said, “Aap jab yahaan nahin the unka log ne Sabarmati Express ko jalaa diya.” Unka log? I opened my mouth to ask what happened after that, but restrained myself. I refused to let him bring the baggage up to the door. Old newspapers were stuck between the house grills. I pulled them out, trying to make sense of the shreds.


Modi had refused to extend the probe to the riots, yet insisted it was a natural backlash. Why was he then confusing the ‘separate issues’?

I was coming back from a holiday in a safe place, Malaysia, but did not feel like a Muslim there at all. I was not catching the news, so did not know about the events. Till I got the text message. It sounded ominous. I began to feel guilty and wanted to rush back home. Soon. Unsafe or whatever, I had to be where I belong. This is also the place of my most potent nightmare. Each time I try to exorcise those demons, something new happens.

Am I afraid of riots? Yes, because of memories of once walking through ashes…

You are waiting for me to throw off the shoes, aren't you? Will you also walk into my mind and scrape away every remnant?
(c)Farzana Versey

Update: I am not publishing comments on this, and had kept the option open to see just how things would swing. Now, I have closed the comments (irrespective of their content) for this post. Here was the one I had posted. (The reaction to it was along the earlier lines):

I have not published any comments on this post. It has shocked and disappointed me that people can be so insensitive. This is not the first time I have written on the subject. And this would most certainly not be the first time I'd get criticism. No one can say that their views have not been given space here because they disagree with me.

There was a difference with this one. It was written with grief. I did not imagine there'd be personal attacks on me. For what? A man you do not know and many claim not to care about?

I did not publish the comments. Today I got one piece of advice, "Stop vetting too strictly. Or the comments will dry up."

Thank you. But I have respected debate; I do not have place or inclination for personal slurs.

Comments have usually added to what I write. The ones not published were trying to reduce it to the lowest common denominator. I don't cater to the coin-throwing crowd.
02/03/2012 19:18