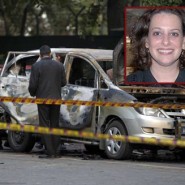 An eyewitness account and CCTV footage go for a toss. Tal Yehoshua Koren, the injured wife of the Israeli diplomat – why does the media insist on referring to her as a diplomat? Did she hold some office? – has given her statement:

“I saw a biker close to my car when I was going to the American embassy. There was a push on the car from behind and I saw the biker. I thought the biker had touched the car. I even lowered the windowpanes to say something to him but he escaped by then. As I remember, the biker was wearing a black helmet and black clothes. I think the bike he was riding was also a black one.”

The initial reports had mentioned that she was going to fetch her kids from school. The latest report says:

The investigators reportedly gave her the version of events as reported by eyewitness Gopal Krishnan. What she revealed after that took the cops by surprise. She said, “The bomb exploded almost 30 to 40 seconds after there was a sudden push on the car.”

Officials said if the bomb took that long to explode, its make would be different from what was being presumed and it would have a timer or remote device as well. “We have to take a relook at all our theories,” an official said. Asked if she had noticed any biker following her, Koren said no. Investigators say Koren’s statements will change the probe approach. “CCTV footages would be rechecked now for tracking black bikes,” said a source.

Have the cops spoken to the other two who were in the car, including the driver? A car being pushed would alert the driver, and surely he would look into the rear-view mirror. The 'sticky bomb’ can be used on a stationary vehicle. Reports mentioned that this was done at the traffic intersection.

Our investigative agencies come out looking foolish based on the version of someone who was inside the car. Sure, look for black bikes, but why discount red bikes and brown jackets? This combination is far more distinctive. Or perhaps an all-purpose black will make it difficult and keep theories floating around? Our officials had assumed it was a low-intensity device that explodes within three to five seconds. Now that the time-frame has changed, they are looking at the possibility of it being remote controlled, which they had earlier too but are making it sound like a new angle.

What would this entail? That the cops do not have to restrict their search to the radius of a few metres. It could be from anywhere, even a passing vehicle, which may not be a bike. The lady has left for Israel in an air ambulance. Her one statement has changed everything. Should she not be here and allowed to recuperate? Will she be called upon as witness should the culprit be caught? If not, then her statement cannot be taken as the absolute truth for investigative purposes, for an identification is not possible as the face was behind a helmet.

Since Home Minister P Chidambaram had already declared, "We think the target was the Israeli diplomat's wife and therefore we have to assume this was a terror attack", the victim has to be around.
Indian agencies will be pulled up regularly. And who is overseeing this? Mossad. Yes, I told you so.

Let’s get one thing clear. If you dish out conspiracy theories, then learn to take them too.
By Farzana Versey at 2:40:00 pm