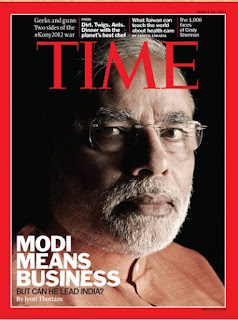 I do not like Narendra Modi, but I find it unacceptable that there should be objections to a cover story on him. Would there be such a reaction if it were not Time magazine and a local one? Are there no op-ed pieces praising him often within the country?

A Muslim organisation based in the US has decided to react. The headlines say “Muslims” object. Which Muslims? The Indian American Muslim Council (IAMC) sitting in the US is called “an advocacy group dedicated to safeguarding India's pluralist and tolerant ethos” and has condemned the cover story on Modi as “a dismal PR exercise intended to whitewash Mr. Modi's complicity in the Gujarat pogrom of 2002”. If it is a PR exercise – and Time magazine cannot claim to be radical – then it is hollow, and even more reason not to give it so much importance.

But, hitting out at straws has replaced dealing with issues:


"Although TIME's cover story is not an endorsement, it contains inaccuracies, half-truths…Mr. Narendra Modi as the potential Prime Minister of India is a diplomatic and moral conundrum for the United States and other countries of common human values.”

This is kneejerk reaction, and I object for a few reasons:

In 2005, the US State Department, in an unprecedented move, placed a ban on Mr. Modi from entering the US on the grounds of egregious religious freedom violations under the International Religious Freedom Act of 1998.

Right. How does a magazine cover feature change anything? The US State Department itself does not always go by “facts” that IAMC is saying the article lacks. There are a number of people who are under vigilance by the American establishment. Does one assume that a PR exercise on their behalf by their supporters would alter perceptions? Empowering the US to make tacit decisions conveys a lack of self-esteem and, more importantly, projects it as a general Muslim need.


IAMC has also called upon the Brookings Institution to salvage its credibility as a think-tank by conducting an official study into the situation in Gujarat both on the human rights and the economic front, instead of merely repeating Mr. Modi's fallacious claims.

On what basis can an international think-tank be granted the power to conduct an “official” study? There are several reports and cases from Indian agencies. These are the ones that may be relied upon. The appeal to Time magazine to run another story from the human rights point of view is really pathetic. All sensible Indians should protest against this ridiculous idea. It will do greater PR for Modi than his agency purportedly has done, for it will prove his ‘fearsome’ reputation. The US and the west love leaders who bulldoze.

Here are a some quotes from the Time piece:

"Modi, 61, is perhaps the only contender with the track record and name recognition to challenge Rahul Gandhi."

Any article that puts Modi, a seasoned politician, against Rahul Gandhi is worth a laugh. If I were Modi, I’d want to disown the article just for this.

"It's Modi in makeover mode: an act of self-purification, humility and bridge building in a state that is still traumatised by the Hindu-led anti-Muslim massacres of 10 years ago and the flawed investigations in their wake...”

This, in fact, makes it look like the chief minister is a sinner put in the Confession box.


"Many Indians recoil at any mention of a man whose name is indelibly linked to Gujarat's brutality of 2002; choosing him as India's leader would seem a rejection of the country's tradition of political secularism and a sure path to increased tension with Muslim Pakistan, where he is reviled.”

This is not the whitewashing of Modi, but of the US administration that is always finding new ways to try and control Pakistan, and “increased tension” is just what it wants. Indians give as much leverage to the Pakistani view of Modi as Pakistan does to India’s opinion on their political leadership.


"But when others think of someone who can bring India out of the mire of chronic corruption and inefficiency of a firm, no-nonsense leader who will set the nation on a course of development that might finally put it on par with China they think of Modi.”

There are different versions in India about Gujarat’s development, and as I have said often Narendra Modi is a regional leader, quite happy ruling a small kingdom. He can manage the elite among his 5 crore Gujaratis, but not all Indians. Most industries keep special funds for corruption purposes; what they dislike is red-tape. It is easy for Modi to do away with it as he was establishing a brand and consolidating it.


"In the decade since that carnage, dozens of individual rioters have been convicted, but the state has never had to answer accusations that it failed to halt the violence: no top officials have been held accountable or had conspiracy charges proved against them.”

This is nothing new. Time magazine is not going to solve this problem, and those who get swayed by falsehoods are already amenable to such a viewpoint.

As regards glorification, it starts at home, in India. He is an elected chief minister, and it is the system that has to deal with what went wrong and how to correct it.