Wear and tear: Who will bell the khaps?

The man, briefcase in hand, seemed to be in a rush. Yet, rather loudly, he passed a lewd comment. I managed a feeble “Shut up”, and even then more eyes turned towards me than him. It took me by surprise because it was at what is considered a sophisticated place. My reaction immediately after that was to check if my clothes were exposing anything. Was I bending at that time? If I accept my right to dress up the way I want to, then can I stop someone from commenting on it? Are there levels of acceptable comments?

This was a few days ago, around the time when young women in Baghpat were being told not to wear jeans, step out of the house after sunset and use mobile phones. It is not the first time we are hearing about this in India, although quite typically the blinkered mainstream media calls it a Taliban-like diktat! Even if it is not stated, there are nuanced family edicts that almost everyone follows. The strapless gowns too are in ‘restricted’ areas. 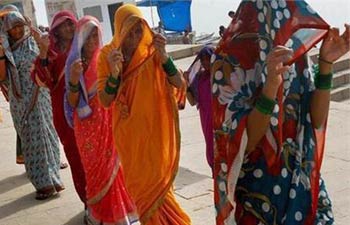 I don’t know what is worse. Some khap panchayat issuing diktats about what women should wear or television channels ostensibly conducting serious liberal discussions that end up as fancy dress competitions by women. Both draw attention to the woman as ‘model’, manifestations of another self.

On a recent show, NDTV's Big Fight, a village woman spoke up for tradition and how there must be restrictions. Her grand-daughter wore salwaar-kameez and believed that Indians do not need to become westernised. Pooja Bedi, who used to host a rather nice talk show wearing tantalising stuff irrespective of who her guests were, decided to dress up in Indian clothes this time. She spoke about how she wore different garments at different places and nobody had the right to touch her because of that. True. But, why did she opt to wear a salwaar kameez for this show and then challenged the young small-town girl that she was showing her arms and had moved away from tradition?

This is most certainly not evolution of tradition, as was argued, which is a vast area and has to do with attitude more than clothes. A woman wearing a bikini at the beach is normal for the urban woman, but she too might be stared at and have people comment. I have seen women in sarees on a weekend outing giggle and say rude things to those in beachwear, so it is not restricted to gender. Are all these women brainwashed by men? I think that would be an arrogant presumption.

There are questions as to why women’s dress matters more than men’s. Female clothing has been socialised because it is seen as the second skin, so to speak. There is one aspect about what a woman wears and the other is how what she wears is viewed. Is it legitimate or fair? This is where I find some arguments puerile, one of them being: But women don’t molest men because of what they wear.

Feminism does a disservice by even raising such a question, for it buffers the clothing idea. Someone said that women get raped whether they wear jeans, sarees or burqas. While this is true, I find such assertions disgusting. It seems to suggest that it will happen anyway so why stop women from wearing what they might want to. Instead of making the covered-up woman into an object of derision, despite what may be considered regressive views, we must understand that we cannot reduce the debate.

Why was there no talk about why the diktat was applicable to women under 40, when there are cases of older women, even octogenarians, being raped? Why no talk about the restrictions on love marriages, which is also a matter of choice and has greater social ramifications?

The problem is that dredges of these edicts make the urban media feel superior. Now that the North East has become a mandatory token, there was a participant from Manipur. She wore an off-shoulder half saree, which is their traditional dress. She told us that the older village woman had chided her for wearing torn clothes and being semi-naked before the show began. Personally, I can see how offensive it is. Socially, I am quite certain many of us remark on those who cover their heads and wear what their custom demands. The Manipuri lady would not be wearing her traditional clothes everyday or even often enough, but she chose to do so for the TV show.

How then are we to get out of this trap of what women should wear or not wear when we make it into an issue? Do these TV channels go to those places to follow-up on their liberal views and see that people get justice? Or is this one more commercial enterprise to keep the garment and mobile phones industry thriving? It is not surprising that Uttar Pradesh Chief Minister Akhilesh Yadav chose to assure the media at a FICCI interaction:

“Whatever should happen should happen for the betterment of society. I firmly believe that no one has the right to curb anyone's freedom.”

It is rather surprising that the Home Minister P. Chidambaram now speaks out:

“Dictates (or diktats) have no place in democracy. Police must act against anyone giving dictates.”

Why is he quiet about the Deoband fatwas, then? There is no need to politicise the issue. It is not about democracy, for we know that these same panchayats will be approached for votes. This is a subject of an individual’s right to liberty, and should someone file a case the police ought to take action. It is the same police that look at women victims like objects.