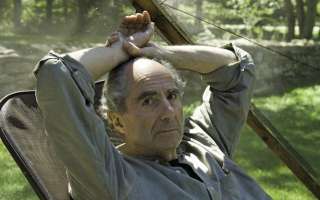 How can a writer retire? Is there an age limit, an “until such time” proviso in an unwritten contract? Will there be a toast to the end of the day, a little gift for “services rendered”, and then post-retirement blues?

When Philip Roth’s plans to stop writing came to public notice a few days ago, it was sourced from an interview he gave a French magazine a month earlier.  It might well have gone unnoticed.  The Guardian piece that highlighted it started in a rather amusing manner, that “the US novelist widely regarded as America's best hope of ending a 20 year drought without a winner of the Nobel prize for literature, has said that he is calling it a day”.

I wonder if this is crucial. There is the constant battle about the Nobel Literature Prize being Euro-centric. But the award is given for a body of work and not a specific novel, so it would not interfere with any accolades that might come his way.

When I think of retirement, images that flash before me are of a bent figure, shuffling through the streets, sunning himself in the park, watching the birds, reading, a sense of loss spread across his face, as he gets up and returns home to a dog that does not bark or a cat that is too lazy to peer into his eyes. He fixes himself a drink, the wine stains of last night, of many nights, still there on the table linen.

There is nothing to return to.

Am I suggesting that a full life necessarily entails concrete work? For many people even today, writing is not considered concrete work. That people put in hours each day and even nights into it does not register as work. It is perceived as self-indulgence, the result of overactive steroids or the manic meandering thoughts of an insomniac.

There is nothing real that a writer has – non-fiction writing too has to deal with reconstructing reality to an extent. No technical tools and implements (pen and paper do not count), no blueprints (a broad framework is different), no office (unless you also have a day job), no Friday dressing (you write at anytime, wearing anything). The writer could be that bent figure, shuffling in the street, reading, walking back. For, a sense of loss is the writer’s gain. A vacuum cries to be filled.

That is the reason I cannot understand why Roth made an announcement at all. Nemesis, written in 2010, will be his last book. Did Nemesis have anything to do with it, like the last lover, the last morsel, the last nightmare?

He is 79, and he said that he wanted to read books, his own and those of others. I don’t see how that intervenes in the process of writing, although one may not to read for long durations.

How did he measure his success? It would seem it is according to the standards he set for himself rather than how the world honoured him. It is bad enough that most of the world thinks writers are wasting time (and occasionally theirs!), but if after decades of writing a man of the calibre of Roth has to contemplate the possibility it has little to do with words and more to do with a state of mind.

How many people in other professions think they have wasted their time? They would probably think they made a bad choice of job. Would Roth think he would have been a better doctor or teacher if he has not thought he was successful?

“I did the best I could with what I had.”

This might apply to a boxer who trains for hours every day, competes with another who has done the same, follows rules, and the victory or failure is about a few punches. This is learned and limited. Writing is not. You do not have anything to begin with, except language, which everyone else has. How you use it, what inspires you, what shackles you, how you arrange the ideas, how you deliberately decide to fall into disarray because that is what you are conveying…these are your possessions, what you “have”.

And you cannot do the best with it, because it is not static. You are not driving along a straight road, or with a map. Even the most disciplined writer can only claim to work regular hours, write a certain number of words, but will not be tied down in such a way that a turn in the lane won’t be taken.

I see Roth’s interview as writing. He is expressing his thoughts. They are his words; they reveal something about how he feels. Had it been fiction, it could well be a character who says, “Enough is enough! I no longer feel this fanaticism to write that I have experienced in my life”, as he has done.

Not many writers feel as strongly as he seems to. He cannot retire. It is too weak a word for a fanatic. He is probably making up little stories as he tries to get the cat to look at him and the dog to bark and the wine stains to disappear. Not all words are written down.