The Muse of Strings: Ravi Shankar 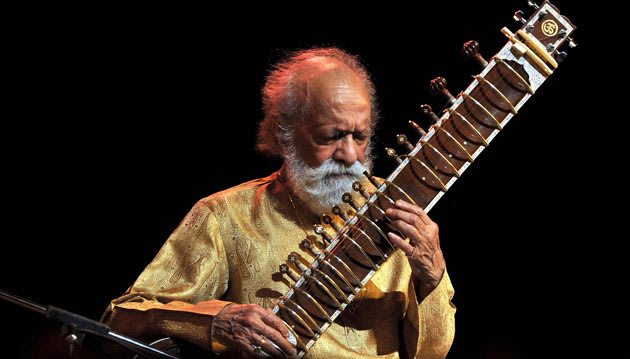 He had the most beautiful fingers. With head bent slightly tuning the sitar, he looked like a mother putting a child to sleep. Ravi Shankar is asleep forever. He died on Tuesday, December 11, at 92.

Frozen in death, memories come alive. He made the sitar, essentially an accompanying instrument to the vocalist, a solo hero. But, was it only the magic with the strings that made him who he was?

Flower power was looking to use its hands. Fingers fisted for release were itching for more. The long-haired, crumpled kurtas of Woodstock found in the sitar the sound of pain. The rudra veena, another stringed instrument, made famous by many a saint including Meera, was more of a wail, a plaintive cry. It was all emotion. The sitar could whip up angry angst and uninhibited joy.

Ravi Shankar realised it was here that he would find heroism. In India, he’d be relegated to sitting behind or next to singers who rarely acknowledged the presence of musicians; they were such giants that it was said the ragas they sang could produce rain, light up rooms…Indian music was meshed with mythology.

Ravi Shankar was too much of a modernist. He belonged to the classic Bengali school of thought that believed there was a rational reason for every act. When the Beatles sought him out, he probably figured that their belief in him had a reason. He was no hippie or backpacker. The bhadralok were a gentlemanly and genteel class whose arrogance preceded their accomplishments. However, it also produced people like Rabindranath Tagore, Satyajit Ray, and Panditji had a subliminal and real connection with both.

They did not spend time at addas (corner coffee stalls or an animated gathering) to discuss the day’s events. They sat in their rockers, filled their pipes, used their beautiful fingers – this seems to be a common thread – and painted worlds from homes with high ceilings. It is easy to dismiss these as ivory tower impressions, but the distance gave their works a touch of both irony and poignancy. Think of a film by Ray based on a story by Tagore and as the scene pans to fields or the desolation of an empty house, the silence is broken by what sounds like broken glass.

The hippies were amblers, the neo fire-walkers. They had to quieten the noises in their heads. A man bending over, putting a child to sleep was their answer.

It can be rightly said that Ravi Shankar took Indian classical music to the globe. He was not the first, but he did what levitating gurus did: made it popular. When he realised that these flower children would soon tire with their death wishes, the essential survivalist in him forsook them. It was a pragmatic decision based on the fact that he had already collaborated with respectability in the form of Yehudi Menuhin.

Did it make him lose touch with the purity? That was his musical genius. Even as he got involved in fusion music, the sitar never played second fiddle.

True artistes are difficult people at the best of times. Shankar as rock star and recusant did not like the muddied bonhomie. His finesse with the instrument did not make him shirk the good things of life. His face, chiselled like a rock, did not give away much. He was a stoic saint of subtle hedonism.

He was born in Varanasi. In those days the Ganges was clean. Smoke from cremated bodies in the ghats was mystical. The famed shehnai player Ustad Bismillah Khan sat there and mourned the dead breathing into the hollow of the windpipe. Ravi Shankar was finding his feet, dancing in his brother Uday Shankar’s ballet troupe.

Later, as a disciple of Baba Allauddin Khan, he honed his innate talent in an old-fashioned gurukul atmosphere, where all students went through the rigours of learning and living in austerity. When he had studied enough, instead of him giving guru dakshina (a token of humility to express indebtedness to the master), he seemed to have got a reward. He married his guru’s daughter, Annapoorna Devi. It was often rumoured that she could have been a better musician than him. She became the subservient partner at home.

This dichotomy existed throughout his life. The modern musician and the misogynist. For a dancer and one who caressed his sitar with such gentle passion, whose very demeanour and speech reflected what people like to call the feminine side, women were integral to his life, but as appendages. This aspect of his persona is important to understand his attitude towards music, for it also serves as metaphor. The promiscuity allowed him to experiment musically as well. One fed the other.

One of his long-term partners was Sue Jones. Once the relationship was over, he did not look back, not even at the daughter. Until the little one grew up to be Norah Jones of five Grammy awards. Panditji had nothing to do with her; he did not contribute to her upbringing and repertoire in any way. Yet, when there was media chatter about his genes (her mother was a performer too, but those genes were ignored) he claimed her.

Why did he not stay away when she had refused to acknowledge him or use his fame? Was he not a great man? Was this an extension of his constant striving to re-invent himself? He said he was proud of Norah Jones although their music was very different; he had never said this about George Harrison’s music.

Anoushka, his daughter from his relationship with Sukanya, was luckier. But he took his time to legitimise them. Guilt and loneliness were making Panditji into a good Indian patriarch in California. As it turns out, Anoushka remains his most famous student.

Although he had differences with his contemporaries and younger musicians too, he quite loved being part of the establishment. In India, he was feted not so much by the knowledgeable, who probably envied him his popularity, but by bureaucrats and politicians. He was nominated to the Upper House in Parliament. The government awarded him the highest civilian honour, the Bharat Ratna, jewel of India. He did use his influence to get land for a special school for music. All this would not have been possible had he sat on stage in India training a generation of young musicians.

In some ways, he was a pioneer of the commercially aspirational artiste. He did not sell feel-good homilies and physical contortions. Music was real. But it being exotic and alien certainly added to its appeal. As he said, “In our culture we have such respect for musical instruments, they are like part of god.” So, if he was the westernised Indian at home, abroad he remained the Indian who adapted to the west. Form was as important as content.

Early Indian classical music had depended on the patronage of the courts. It was the kings that kept the tradition alive. By the time Ravi Shankar began to make waves, there was little choice. He could stick to his art or play at venues. He chose a third option imbibing the other two. He had the luxury of choosing his patrons. How do we gauge creativity in this context? Pablo Picasso said, “Art is a lie that makes us realize truth.”

Several years ago, I stood in a music shop in a lane in Dadar, a crowded central suburb in Mumbai. It was dusty and instruments were displayed like hapless wares. I wanted to purchase a harmonium with my limited college-days budget. The store manager pointed his fingers in several directions without much interest. I hit the keys; they screeched. Soot had collected in the crevices of the unhandsome squat creature. The man had veered away. He pulled off a cloth from something that stood in a corner to reveal a statuesque beauty that looked like burnished gold under the lamp. He plucked at its strings. It sounded like a vain young girl’s anklet walking with measured steps. The hauteur was alluring. The sitar even in those grubby hands looked like a goddess.

Much later, I would find out that someone had become revered for understanding that reverence. The beautiful fingers of Pandit Ravi Shankar, head bent, was not putting a child to sleep. He was bowing before a sound he was a master of and a slave to.