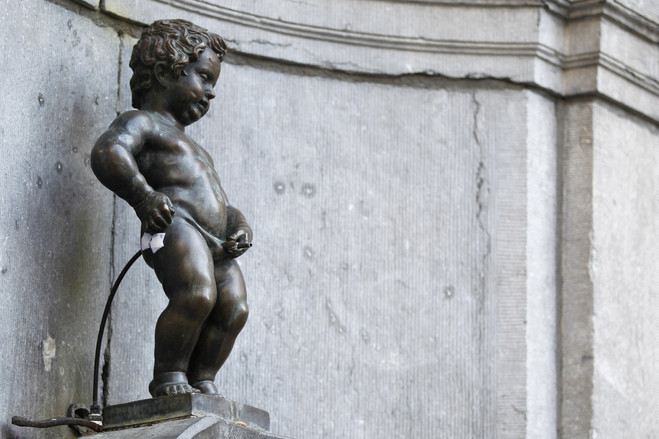 What makes Belgium’s capital boast of a little boy urinating? The last thing you might want is a spray of piss on your face as you pose before what is considered an iconic structure in Brussels. Is it fun? Is it funny? Does it have to be?

I read about the Manneken Pis a while ago. Standing two-feet high, the sculpture of a boy urinating was created in the 15th century. It continues to be one of the most-visited sites and it is said “no metropolis boasts such a well-known fountain engaged in the same bodily function”.

It might look cute and provide a few chuckles.  I like the idea of irreverence.  Installation art has not shied away from exploiting such bodily functions.  However, I am a bid disturbed about how this image is being marketed beyond its iconoclasm.

The report states, “Even as society has lowered its tolerance for images of nude children and become hypersensitive about sanitation, the politically incorrect statue has gained stature.”

This is beyond rubbishing political correctness. Just look at the examples of how the mascot is employed in ads and logos, as well as edible products such as chocolates, fries, lollipops.

There is a further reason that bothers me:

When city officials wanted to promote a job-creation plan in 2005, they used ads depicting an office full of Mannekens at computers and in meetings. Another poster showed a construction site bustling with Mannekens in hard hats.

Is this not pushing the idea of child labour? One has to only watch photographs of children carrying loads on their heads, or toiling in fields and factories, some without clothes and with distended bellies, or crapping near railway tracks or in street corners in the poorer nations to understand that this stops being sweet.

Part of the fun is 896 suits of clothing that have been officially donated to him over the centuries and which he regularly wears. Many are displayed at the city museum, including a spacesuit, an Elvis Presley sequined jumpsuit and a French military officer's uniform that passing French soldiers must salute when the Manneken dons it.

While this seems harmless, who would really get excited about the adult prototype behaviour? Being a space scientist, or a musician, or an army officer might well be later ambitions for young people. But, how different are these from Barbie and Ken in different clothes? If we have issues with Barbie’s curves, then how do we explain the innocence of a child being exploited? Since we know the symbolic nature of the hoodie, what could a teenager wearing one imitating the Manneken convey?

Back then, statues at public fountains often performed biological functions including spitting, bleeding and lactating. “Before Victorian times, people didn't have all those complexes about nudity,” according to historian Roel Jacobs.

Lactating imagery is quite profound as it is a symbol of creation and nurturing. One might say the same about bleeding, for blood is about life and death. One does not perform bleeding as a ritual, though; menstruating too is in a manner a natural way of the body cleansing itself of unused eggs. Public spitting is disgusting, but one may consider the metaphors of ‘to spit at’ or ‘spit out’. Likewise, urinating could be to ‘piss off’, ‘piss on’.  For example, there is the satirical image of the Manneken spraying Nazi occupiers.

Here, the child image is used not only to understand a violent credo, but also to fight it. It amounts to brainwashing the vulnerable. The statue cannot be seen as pure fun if it is imbued with the responsibility of being more than a national symbol.

I do not think it is only about nudity.  There is the depiction of angels and the perennial Cupid in art. And while the Victorian era did bring morals into the forefront, we have no way of gauging whether strictures or openness truly altered human bodily functions. Morality and the lack of it invariably leave people with the choice to exploit others rather than themselves.