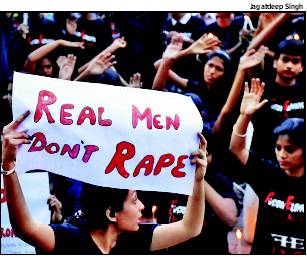 
Behind the high walls of Tihar Jail, Ram Singh hanged himself to death early on Monday, March 11, reportedly using his own clothes.  He is one of the main accused in the Delhi gangrape case.  Therefore, the concern will be not so much about security in prisons, but how justice did not get to perform live before a salivating audience.

The criminal conducted the last rites of the case, at least partially. The victim’s brother has been quoted as saying, “I'm not very thrilled with the news that he killed himself because I wanted him to be hanged ... publicly. Him dying on his own terms seems unfair. But, oh well, one is down. Hopefully the rest will wait for their death sentence.”

While one understands the personal trauma, we ought to realise that in this instance the personal became political.  The discourse objectified the very rights that were being fought for. These need to be re-examined.

It has been almost three months since the Delhi gang rape of December 16. Ever since, the media has been carrying articles or doing television stories on different aspects of what one newspaper has slotted as ‘Women under attack’. The conscience- keepers do not realise that this sounds fetishist.

What will it achieve, when it merely uses victims as exhibits – the covered, blurred faces not so much to protect the identity of the woman, but to desexualise her in a certain context? This amounts to shaming the shamed.

I’ve read a veritable array of personal accounts about where women were touched, by whom, for how long, and the manner in which they sought closure. This epidemic of exhibitionism serves two purposes – gaining sympathy and joining the bandwagon. One might think that this is about solidarity. Indeed, there is bonding over the collective assertion, but feminism gets reduced to the lowest common denominator of being ‘used’. Any contrarian thought is elbowed out as being insensitive or cynical.  No one is willing to face their own cynicism that did not trust the judiciary, the government.

“The thing women have yet to learn is nobody gives you power.  You just take it.” - Roseanne Barr

Elite suffering is colonising the muffles of the unheard. In doing so, it is silencing them. Everyone has a right to talk about their experiences, but they do not necessarily represent the unlettered, unvoiced. Who benefits from such catharsis, if it is just that? 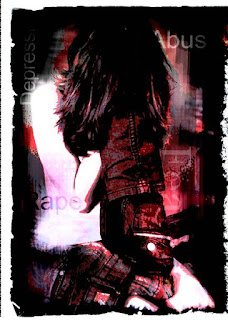 Jyoti Singh Pandey has been completely taken over by the public. Whether it was about giving her names or starting campaigns, it turned into a reality show. She effectively became a brand.

A month after the incident an organisation held a fashion show to create awareness about rape incidents. One of the victims was told by an actress in a benign tone “not to be ashamed, it is not your fault”.

It is not news that rape is about power, but it is also about abuse of a woman’s body. The logistics make it difficult for a woman to adequately fight back. Therefore, dwelling on her valour denigrates the discussion and makes it incumbent on the woman to be projected as a braveheart to commemorate.

Reduced to a vegetative state, how relevant is an award for courage? On International Women’s Day, US state department honoured Nirbhaya (the fearless, one of the names given to her by a newspaper) with a posthumous bravery award. The citation applauding civil society stated, “Thanks to these efforts, the Indian government has begun to take action to follow through on those demands.”

What are they doing about their own women? One in six women in the United States has experienced an attempted or completed rape, according to the Department of Justice on “Prevalence, Incidence, and Consequences of Violence against Women’, 1998.

While it is commendable that Indian lawmakers are adding clauses, did we need to have a Harvard University task force to advise on the implementation of the Justice J S Verma Committee report?

The foreign media swooped down for an ‘India is still so backward’ story that would transmogrify into an Indian Winter Revolution. They did not care to go into the villages or visit the families in ‘danger zones’ where security forces routinely abuse women. They positioned themselves in the capital.

At the World Economic Forum in Davos, IMF chief Christine Lagarde dedicated a moment to the Delhi gang-rape incident and said in her speech:

"... But you will ask what it has to do with economy. It is indeed about economy and equality and bringing in prosperity. No policymakers have paid enough (attention) to the fact that more equal distribution of income would help in supporting women better. Gender inequality is also very important and the policymakers have not paid enough attention to either of the two. The fact is when women do better the country does better and policymakers need to understand this.”

Tying up crimes against women with economic prosperity seems to negate the crime. It ignores the fact that victims do belong to different economic backgrounds and to somehow suggest that the performance of women in the workplace can ensure their safety is a faulty assumption.

“I asked a Burmese why women, after centuries of following their men, now walk ahead.  He said there were many unexploded land mines since the war.” - Robert Mueller

People are talking about changing the mindset, yet the word rape has gained currency and become an adjective for any sort of exploitation.  If as per statistics one in three women are raped or beaten in their lifetime, then hypothetically 33 million of the one billion would have experienced it and been part of the One Billion Rising campaign to “demand an end to this violence”.

How exactly does a refusal to accept violence work? Violence does not knock on doors and seek permission to enter. In cases of domestic battering too, women have no prior knowledge. To imply that some women might “participate in the status quo” could also implicate those who exploit it to redeem themselves.

A 23-year-old violated brutally in a moving bus by six men was quickly made “India’s daughter”, so that the cause became a cause celebre. The young people wanted the chief minister to talk to them. Congress party president Sonia Gandhi and Rahul Gandhi were expected to visit. Who were they supposed to talk to? How many of the protestors could be seen as legitimate?

It was under such pressure that the victim was sent off to a Singapore hospital, the media chasing the ambulance as in a thriller movie.  After her death, one minister said that she should get a state funeral. Later, Ms. Gandhi went to the house of the family four times and promised them a house, a job for the son.

This is a cover-up, and the protests have achieved just that. Not to speak about the incident where they stooped low enough to conduct a mock funeral for the young woman.

“All this pitting of sex against sex, of quality against quality; all this claiming of superiority and imputing of inferiority belong to the private-school stage of human existence where there are sides, and it is necessary for one side to beat another side.” - Virginia Woolf

Like the fashion and cookery pages in newspapers, there are now ghetto sections about assault on women, interspersed with ads for ‘ladies’ products. This is no different than tapping into a niche market. Every object of desire now comes with a whip-wielding provision.  The media is making huge money on sponsorship deals to protect women.

The Times of India had written this painfully patronising note about what every woman wants:

“Where would Mumbai be without its women? They are the heart that rules the hearth. Over the years, they have made their mark in politics, in business, on the shop floor, in the boardroom. They have juggled responsibilities of career and family with dexterity. Yet, the city does not do its woman proud. It preys on her... It tries to stifle her thoughts and throttle her spirit.”

Why is the media breaking into hives with cases now, even regurgitating old ones? This is not altruism, but opportunism.  The note has conveniently catered to the high-end readership and ignored those who work long hours in the fields, in factories, as unskilled labour. It has drawn attention to the juggling between home and career when it ought to be debunking such stereotypical roles.

This attitude has spawned an industry of fear. Those who want women to be independent are bent upon making them dependent. Special cab services, volunteers, helplines have sprung up without any checks on the probity or practicality of such a move. There are dangers, but what about the female workforce that does night shift?

Women in chauffeur-driven cars who party late appear on TV panels sounding concerned about their safety. The cities that give opportunities to women are demonised. Chastising of insensitivity, shamelessness, callousness have become calling cards.

If we think there are no precedents to the Delhi gang rape then it reveals disconnect with the society we live in. Worse, some people, including women, were even speaking about how there was nothing to compare with this act (the rod is not a penis, as someone had the audacity to state) as though there is a yardstick for what constitutes violation of a woman.

An hour’s drive away from the capital city, there were the notorious Nithari rapes and murders committed by a wealthy educated man. He chose his farmhouse and with the help of his servant lured many women, mainly tribals and villagers. If this was not disgusting enough, the servant in a typically feudal hierarchy was allowed to take over, which he did with vengeance by indulging in necrophilia and cannibalism. Will we ever know if these women were brave and put up a fight? Where were the protests against the man, an alumnus from a tony college in the capital?

What about the nurse Aruna Shanbaug at KEM Hospital in Mumbai who was raped and then throttled with a dog chain by a sweeper? She has been lying comatose for decades and all discussion has concentrated on euthanasia. The rapist got away with a few years’ sentence and even managed to get a job in a Delhi hospital. Surely, she must have fought. Is she brave?

Women’s rights have been pinned against the wall as a mere poster of audacity.