The Battle for Hierarchy: A Mango, Songs and Cannes 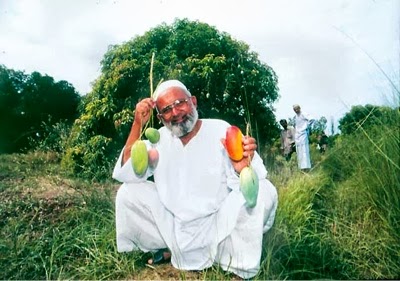 There is this tutti-fruity hierarchy that really pisses me off. It is not anymore about what is offensive, but who is offending.

Someone has gone and named a mango after the Delhi gangrape victim, or at least one of the names given to her by the media.

Kaleemullah Khan has achieved success with new varieties and is a known name in the field. This was “his way of honouring the bravery and spirit of the young physiotherapist". He has other varieties named after Nargis and Aishwariya Rai as well as Sonia Gandhi. I know of a rose in Ooty named after Tamil Nadu CM Jayalalitha. And the mangoes also have male names, including Akhllesh Yadav. And there is the Sitaphal (custard apple). Obviously the step ladder does not notice that it is a goddess's name.

If someone wishes to pay tribute, why is there an outcry? Is it because he is considered lower down in the scale of 'concern'? Those who are talking about "where to draw the line", did any of them do so when they went on a rampage to become newsmakers for simply holding candles? There are awards named after her, a fund in her name, not to forget rallies. And can we forget how several people came out of the woodwork with their forgotten stories to ride on the 'event', that continues to manufacture and feed several other events?

I am darned tired of women being treated as an about-to-be-endangered or a protected species.

Recently, actress Shabana Azmi hit out at some lyrics. Mumbai Mirror's report quoted her: “I cannot believe that the song Ishq Ki Ma Ki... has been written by a woman Pallavi Mishra. Revolting, shameful, disgusting. Condemnable.”

A small problem here is that the lyrics have been changed, and it was not even written by Pallavi, who thought that the attack wasn't only personal, but revealed a discriminatory attitude: “She made such a noise about it because she thought a woman has written it. But she never raised any objection when the men of the industry churned out songs replete with expletives and double meanings in films like 'Delhi Belly' and 'Gangs Of Wassyepur'. Why this hypocrisy?... If one wants to be moralistic, then they can’t choose their situations.”

But choose they will. In fact, Azmi was part of an event organised by the Mumbai Police to discuss Rights on Womens Violence. There was adman Alyque Padamsee, famous for the Liril ad that put a woman in a bikini under a waterfall and for making many sexist comments. Obviously, it did not bother her. Among the others were two mainstream actreses — Karisma Kapoor and Rani Mukherjee — who have both lip-synced "offensive" lyrics. Why, one never heard Ms. Azmi utter a word about "Halkat jawaani", "Sheela ki Jawaani" or "Munni badnaam hui". These are big-ticket productions, after all.

Besides that, what passes for realistic cinema is allowed to bend the rules, while it strives for the same awards and encomiums as mainstream films. For the audience, this is about the movies. In fact, if it is about realism, then do the actors use such cuss words? Why assume that this is common lingo among the poor? Even if it is, is this the only realistic aspect? In that case, don't show trimmed eyebrows and hair bangs. There is an inherent superiority complex, not only about what they are but also what they portray.

She is not the first one to say this, but Sonam Kapoor is right that most actors want to be stars. The old avante garde movement has transformed into slick, although even back then there was a pecking order of 'stardom'.

I've been watching some clips on the news channels covering the ongoing Cannes Film Festival. It is so obvious that everyone wants to preen, even those who cannot. Why is the poster boy of edgy cinema, Anurag Kashyap, selling his films all dressed up? Because Cannes has always been about glamour. It gives space to cosmetic and jewellery brands, and fashion designers. So, if people comment on who is wearing what, it is because they are paid to get noticed.


What actress Vidya Balan wore was over-the-top and in no way reflected 100 years of Indian cinema that is being celebrated. As a jury member, she was under no compulsion to follow fashion, but she did, and badly.

She can't brush it off. But there are and will be the groupies who say these things do not matter. Her designer had his brief was to show her as respectable. As opposed to what? When she was not in nautch girl mode or the tamasha artiste one, she went for the lady from the NGO attending an activist's wedding look. She carried nine suitcases, so she will be judged by the standards applied to others.

I am aware this will be considered catty. Why? Because she is a serious actress. Had I said something similar about Mallika Sherawat or someone with a 'reputation', it would have been considered all right. This is stardom where you are not answerable. All this business about being part of good cinema has nothing to do with it.

Let's get this straight. People do dress according to the occasion. I'd like to know how many will not snigger at a suited man or a lady in chiffon at a protest rally. They darned well will.

Activists too have their dress code to appear the part. It's not just the scruffy look anymore, but various versions all screaming out the roleplaying. Do not forget Arundhati Roy wearing a bandana for her walk with the Naxal comrades.

I am particularly perturbed by how vocational feminists are not concerned about the women who are derided for their 'reputation'. They who become subjects for the serious actresses to happily enact their stories, give interviews about the research they've done and applaud their courage. But do they even remember them when they go up on stage to collect their awards?

If what the mango man has done in exploitative, or in poor taste, then these divas in denial are a notch higher at being predators.