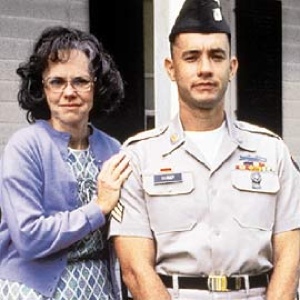 “Mama always said there's an awful lot you can tell about a person by their shoes. Where they're going, where they've been. I've worn lots of shoes. I bet if I think about it real hard, I could remember my first pair of shoes. Mama said they'd take me anywhere. She said they was my magic shoes."

This was Forrest Gump in the film. It was one of the most moving, intelligent, and profound experiences. Today I remember it from the point of view of how mothers, while protecting their children, can set them free. I know, and I have had such conversations with her.

I was not different in the sense Forrest was, but I spent a great deal of time by myself, thinking. I thought even while I read, and I did read a lot. Watched movies, too. No restrictions, except for adult content. And music. It was mainly old Hindi film songs, ghazals, bhajans, qawwalis, but in my teens I was also exposed to what was broadly termed 'western music'. She took a liking for Abba, and I was more than happy to sing. “Mother says I was a dancer before I could walk...she says I begin to sing long before I could talk...so I say thank you for the music..."

I transpose my experiences with the Forrest quote and I realise I figured out early in life about the magical properties of ordinary things. Forrest was probably being made to feel that his 'specialness' was special in a normal way. But, how normal are we the normal? As Mrs. Gump tells her son, "Don't ever let anybody tell you they're better than you, Forrest. If God intended everybody to be the same, he'd have given us all braces on our legs."

The premium placed on being like everyone else made me cringe, without even knowing that I was cringing. My magical world made me open the cage of the lovebirds that my uncle received as his wedding gift to let the birds free.

I did not think about shoes then, but I know I was told I could do anything I wanted, but not to hide it. Secrets were okay, but nothing that would deceive or get others worried. Was this freedom? Yes, freedom with responsibility. Freedom do make mistakes and then having someone to understand them, and not running away.

And I can tell a bit about people after seeing their shoes, and their bare feet.

It is delightful to recollect Forrest's words: “Now when I was a baby, Mama named me after the great Civil War hero General Nathan Bedford Forrest. She said we was related to him in some way. What he did was he started up this club called the Ku Klux Klan. They'd all dress up in their robes and their bed sheets and act like a bunch of ghosts or spooks or something'. They'd even put bed sheets on their horses and ride around. And anyway, that's how I got my name, Forrest Gump. Mama said the Forrest part was to remind me that sometimes we all do things that, well, just don't make no sense."

I missed out on this fantasy! But it did not stop me from imagining all sorts of ancestry. However, the point here is the last sentence. Why do we have to make sense? What is sense - the sensory, the perception, or merely of the senses? It makes perfect sense to me when I don't make sense. It does not mean nonsensical; it is more like an impulse, a spontaneous act without cogitation or concern about the consequences.

Like, “My mama always said, 'Life was like a box of chocolates. You never know what you're gonna get'."

Does it matter when it is chocolates we want? If we cared, then we'd make a choice and know exactly what was in that box.

Sometimes, I do like the familiar, often I don't. Surprises make us believe in new things. And this has stayed with me as it has with her.

Or, as Forrest introspects, “My Mama always told me that miracles happen every day. Some people don't think so, but they do."

The best miracles are those that we are not even aware of. They happen and we may or may not discover about them later. In the soles of our shoes?