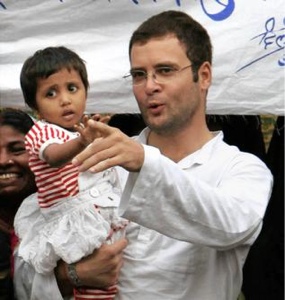 Would we have heard about Kaushal Shakya had Rahul Gandhi not handed him a Rs 1000 note?

If this is a PR exercise, then why is the media falling for it? Websites like Firstpost come out with supposedly weighty analysis, but fall in their own trap. It writes, beginning with the quote of the 11-year-old, who happens to be a news hawker:

Now, if the PR was so good, it would not find a boy trying to sell a paper with news about Rahul Gandhi. This would be a dead giveaway. But, we are not done yet:

“It happened when Rahul’s motorcade was stopped at a traffic light in Bhopal (Really? The Rahul motorcade stops for lights? And a newspaper vendor is allowed to get that close to the crown prince?)"

Usually, it does not. Unless, the intention is to be 'one with the people', and since Firstpost has decided that this is “empty symbolism", anything can happen. So why are they surprised? Besides, this whole “crown prince" is getting to be a bit lame, just as referring to him as Rahul baba in op-ed pieces is. It reveals more about those writing than about him. And just a reminder: his father Rajiv Gandhi got killed when the junta was allowed to get close to him.

One may call this populism, but which leader does not resort to it?

Now let us return to the boy:

“Rahul asked him instead why he was not in school. Moved by the boy’s story about wanting to be a doctor but having to help out his family of five, Rahul offered him a 1000-rupee note."

Often, young kids who are peddling stuff insist you buy, and if you say you don't what or need it, they say, "Kuchch paisa de do, bhookh lagi hai (give me some money then, I am hungry)". This is the sad reality. And I know many people who do hand out money. This is not all. At the fancier hotels, the real babalog give big money to the durbans and the valets for parking their wheels.

The holier-than-thou attitude transposes another Congressman who said “If Rahulji could give the boy Rs 1000 from his wallet, I would be delighted to fund his education.”

For the news purveyors, it is just a story with the protagonist as “the master of the meaningless gesture".

Rahul Gandhi has money, and he knows that this amount won't take the boy far, but there are ridiculous suggestions elsewhere that he should have not assumed the kid would have change, or that others with him could have offered the money.

Does it matter? One boy went away with some cash that made him happy. "Now he has been offered a monthly stipend of Rs 1000 and a seat in a private medical college after he finishes school."

If you give Rahul publicity for it, then it is your problem. You want to discuss macro issues, then do so. Don't use a crutch for it. Kaushal did not grab the note, as much as some in the media grab opportunities, and in fact “demurred". That is when Rahul told him, “Please keep it. Become a doctor. Never let your dreams die.”

Even Rahul Gandhi would know that this amount won't take him far. What kind of asinine thinking is it to question someone who tells someone to dream?

I once gave a young beggar some money, a little more than the usual loose change, and asked him to buy a few things that he could sell. I did not know about his dreams, but I was hoping it would at least be a first step towards earning rather than begging. So, heck, yes. It was a gesture.

The barrage against Rahul continued:

“It’s an odd statement from a man whose own dreams seem so fuzzily and obstinately opaque even to the party that’s hitched its wagon to him. He is the posterchild for the man who is living someone else’s dream."

Indeed, the party has hitched its wagon to him. Let us recall other parties and their 'hopes' and their posterboys. And whose dream is he living? If he was, he would have already been the prime minister. These supposedly smart statements do not convey anything.

Pick on Rahul Gandhi for his political naïveté, and even his dinner with Dalits. But, getting personal is 'symbolic' of a lack of argument. As empty as that which is being critiqued.