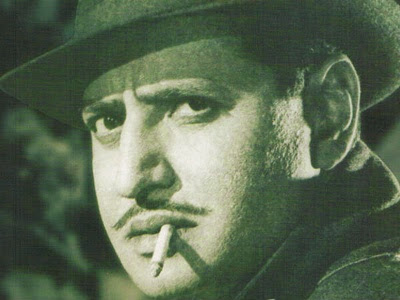 Pran means life. The actor is gone. Age 93. What we would call a full life.

I am hearing words like legend, complete actor, good human being in the few obituaries telecast. It was recently that he received the Dadasaheb Phalke Award for his contribution to cinema.

His most talked-about role remains the one in 'Zanjeer'. I found the character of the Pathan a caricature. However, it was it a departure from his villainous roles.

And a full-blooded villain he was. Just the other day they telecast an old film in which his character is a village bumpkin with a limp, desirous of marrying the beauteous heroine. I just could not accept him as the character. Therefore, I do not quite go along with the 'complete actor' theory.

He was way too suave, the bad guy version of Dev Anand, if I may say so. Best suited to the urban and urbane milieu, or the regal one. He was meant for large mansions, leather whips, armours, gladiator-like stance.

There were times I wondered why the rich spoilt woman he liked chose the pink-lipped, rosy-cheeked heroes over his swarthiness.

It is said that no one named their children Pran because they did not want their offspring to have his traits. Was he fearsome?

His voice was grating to listen to, and whether by design or a natural ability, he managed to use it to devastating effect. 'Chewing words' was not a phrase; he seemed to chew and taunt with every line. A tad bit dramatic, as those films were. But loud he wasn't.

With only a crooked smile and a glint in the eye he could convey his intentions. And top it with a most stylish flick of ash from his cigarette.

If we can remember those ashes, would we forget him?

I am sharing a song not from his villain days, but his first 'positive' role in 'Upkaar'. For, this image represents finality...

The song from Upkar has been composed by Kalyanji-Anandji, sung by Manna Dey, written by Indeevar.

A rough translation of the lyrics follows:

promises, vows, love, trust are all words in the wind
no one belongs to anyone, bonding means nothing

a prophet might well be before you, but saved you shall not be
for your very own blood will burn you, in the pyre's flame
your flight in the sky will end only in meshing with the soil.

In your joy who walk with you will in your sorrow turn away
they who claim to belong to you will your heart break
they who deceive god, why would they spare humans?