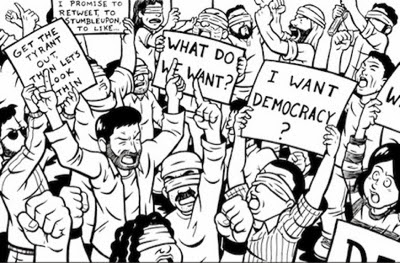 I learned my lesson many years ago as I walked out of her hut, her children trailing behind me in the narrow gully where my elbows grazed against the tarpaulin sheets. She followed slowly; she knew these children would go nowhere.

There was a small store outside. It sold cigarettes, beedis, paan masala, and in one jar there were sweets. I asked the shopkeeper to pack the lot. He wrapped them in a soiled newspaper. I handed it to the oldest child. The mother had reached us by then. "Iski kya zaroorat hai (Why the need for this)?" she asked. I merely said I felt like it. The kids held the open packet but did not touch the sweets.

Was I insulting her? Did I assume she felt no pride in her small home, in the life she lived with as much dignity as poverty could afford? I urged her to keep it, I had not brought anything earlier, I did not know where she would be, her house, her family. She was only a story, a post-riot followup.

She knew that. I knew that. I was not doing her a favour; she was granting me her time, opening up her wounds again. Those sweets would last for a week, two weeks. Then what?

There are people who call you brave, who think you are giving voice to the voiceless. At some point, you begin to believe it. Until you realise that sweets don't last. I am glad this happened early for me. I am glad I wept and felt guilty enough not to imagine I could change anything, that touched as I was by the feedback I was aware that it was from people like us.

No work — in films, in art, in music, in writing —can bring about radical change. If you need to get 'artistic' legitimacy for your beliefs, then you are just a riff, a mute painting, scattered words. None of these forms reaches those most affected. Award-winning photographs from war zones and disaster areas do not make us more aware, although they could potentially have an emotional impact.

Who has the time to understand issues when pictures from, most recently, Egypt show massive crowds with captions stating, "It wasn't the army that toppled the government, it was this." It is not even amusing. Where in the world do armies operate by popular mandate? Is a crowd at a square revealing of a popular movement?

The same can be said about the Delhi gangrape protests. Why no such protests later, especially when people in authority, like armymen, are involved? Is it because there is no president's mansion to break into? The right to dissent has been appropriated by a few, who are then built up by the mainstream media. This is ironic considering they have reservations about this same media.

So, do I go along with the accusation of 'armchair critics' and 'ivory tower intellectuals'? No. Not only because according to some I possibly belong to the category (even though no stories have come on a platter to me) but because my issue is not with opinion and analysis — it is with the arrogance that believes it is speaking on behalf of a group of people. It is arrogance to believe that those who do not express concern about what is being hammered into them are any less sensitive, knowledgeable or worthy.

This arrogance assumes the role of the 'other', and in that arrogates to itself an objectivity that implies those closer to the subject might not possess.

Is it true? Views by their nature are subjective. One is not a sitting judge at the court or an investigating officer that one can or even needs to be impartial. One can be fair by understanding the facts first before forming an opinion.

What I see more often these days is an opinion is formed based on others' opinions, riding on the back of populist movements. Some might say these are ideological beliefs and those espousing them would naturally lean towards them. An ideology is not static and it is arrogance again that relies on such pigeonholing, which some of these people snigger about.

A few issues are picked out and they become the template for pitching the voice.

One such voice appeared in last Sunday's newspaper. Those who claim to never read the writer had all read him on that day, which turned out to be the day of judgment. The poor jokes about his lack of penmanship aside, I found the whole discussion that exulted in rejoinders doing precisely what was done in that piece: patronise.

I had no intention and have none to post a riposte to the article by Chetan Bhagat. All I can say is that the reactions to his piece revealed the hypocrisy I have spoken about in the previous few paragraphs. This has become a good test case.

I should ideally have been hopping mad. "How dare he speak in the Muslim voice and run down the community with stereotypes?" was the tenor of the anger. Few realised it was his elitism in conflict with theirs. If he used the first person narrative to make Muslims into backward creatures, the opposition created the caricature of a liberal Muslim that satisfied them. It was Us vs. Them in which neither was the Muslim who they were speaking about. Yet, they too spoke for these people.

The P word was tomtommed. Privilege. It is privilege to speak, anyway. It is double privilege that they take up the rights of the market-driven groups and not those within their own communities, cliques, coteries. So, essentially, it was once again the voices who were telling people, in this case Muslims, who was the better outsider, the more sensible objective voice.

They were doing a Chetan Bhagat on Chetan Bhagat, and their sophistry just made it a bit smarter. It is unlikely that they will question the elite flag-bearers of causes, who not only become spokespersons but also make a joke of the problems facing those groups by seeking martyrdom. "Put me in jail, I won't stop my dissent" they say. Ask the people who are already in jail for crimes they have not committed what it is like. Ask those who cringe in corners not knowing when they will be picked up by the authorities or, worse, are just shot dead. They do not have the luxury of hunger strikes, marches. Their anger is leashed, so they cannot even run hopping mad about sedition charges.

The voices become self-promoters, whether they do it unwittingly or not. Their argument for being in the limelight is that the issue will get mileage. So, do we need to bring out the popcorn? Does mileage result in change? I understand that many of the issues are too entrenched, they cannot change overnight. But do notice it is mostly prominent, eyeball grabbing causes, preferably those with international appeal, that draw them. And, amusingly, it is the champagne set they look down upon that finds them utterly charming.

Post the Mumbai attacks, a discussion was organised. I was invited to be on the panel. It was a perfect intellectual setting. But my instinct was rebelling at: "Would love to have you, let us know soon. There are a lot of people who want to be on the panel ever since news of this has gone out."

Prominent names. I could foresee something akin to a wine-and-cheese evening without the wine and cheese. "Look, where I am...look, what I am doing"...

I had opposed some of these people's stand and the last thing was to fight over the spoils of lost lives. In some ways, I accept this as my arrogance. But, I really do not want to be either anyone's voice or anyone to be my voice.

Many years ago, I learned this from a slum dweller, whose children carried a packet of sweets that would not last. Just as many concerns do not.