Rahul plays while Manmohan is away? 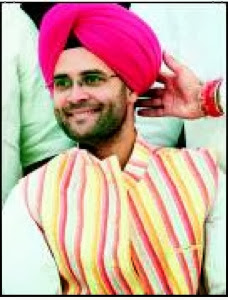 Dr. Manmohan Singh might never have imagined that the BJP would stand up for him, his self-respect, and his position as PM. Fact is that the saffron party has no choice. The reason is what almost every newspaper and television channel has described as a "bombshell" by Rahul Gandhi. He said:

"Now, I will tell you what is my opinion on the ordinance. It is complete nonsense, it should be torn up and thrown away. It is my personal opinion...If you want to fight corruption in the country whether it is Congress party or BJP, we cannot continue making these small compromises. Because if we make these small compromises, then we compromise everywhere...I am interested in what the Congress party is doing and what our government is doing. That is why what our government has done as far as this ordinance is concerned is wrong."

Rahul Gandhi is saying what they are saying, but they do not like RG and the dynasty, so what do they do? Talk about power centre and other such stuff that they witnessed themselves when Narendra Modi and L.K. Advani did a bit of public sulking. 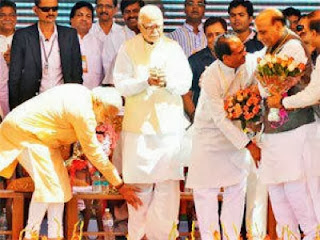 Apart from the difference in nomenclature — MMS is the PM — Rahul has done a Modi in more ways than one. Bluster, precociousness, and smart calculation. RG is cannier than we think, and good going.

If it is going to be about a poster boy, then the Congress better get their own. The 'cult' factor is not designed for statesmanship, but social media bravado. The Dalits and the poor RG was supping with will not get affected either by the Ordinance or his opposition to it. If we notice, the main theme of the Ordinance has pretty much been ignored. This personality politics is specifically to keep the media happy with one rally for another, one speech for another, one smart bomb for another.

The cabinet had passed the ordinance that would protect convicted MPs. RG is not in the cabinet; he is the vice president of the Congress. As a party member and a senior functionary his objection, albeit late, is permissible. It is not, however, incumbent on the PM or the cabinet to reverse the decision. That Dr. Singh is more than likely to do so is another matter.

Why did RG not send him a letter (he did so later) before walking into the communications in charge Ajay Maken's press conference where he was defending the Ordinance?

Simple. The PM will not be the final authority. President Pranab Mukherjee will have to pass it. Not too long ago, the president was the finance minister and he was eased out of his post. Is it possible that the real deal is this?

BJP's Meenakhshi Lekhi did imply so:

"It's a political stunt, the timing is questionable. The President was probably returning the ordinance, so someone had to take the credit, and it was him."

For a Modi groupie, she is certainly acquainted with political stunts. However, this is not a school report. And if what she says is the case, then why is the BJP concerned about the PM and not the president? Why is the BJP so insecure that it starts worrying about who gets the credit, when they have been shouting all this time that whatever the PM does is not on his own?

BJP spokesperson Nirmala Sitharaman got in the "what nonsense" mood when she reacted:

This is so jejune. His words are absolutely clear. Had he not said what he did, they would suggest that he is the architect of this Ordinance. Now it comes to the 'family can do no wrong' criticism. He is speaking as a Congressman, in his personal capacity. The decision was not the PM's alone. The BJP and other parties have their share of goons protected as MPs, so is their public objection not double-speak too?

Do not worry about Manmohan Singh. For all we know, he was already in the loop about the "bombshell". He has in fact been spared from taking an obsequious stand, and this gave space to RG to assert himself without attempting to be politically correct or waiting for an elder. He did not mention Sonia Gandhi, he did not mention his legacy.

Sure, RG is playing to the gallery. He is doing a public rolling up of sleeves. He may or may not be the Congress Party's prime ministerial candidate, but he is ready for battle. And that is bothering the Opposition. They now don't have to deal only with a silent PM with a very long and impressive CV, but someone who will speak their language if push comes to shove.

Rahul Gandhi has spoofed the BJP's grand standing about being a party that believes in democracy every time there is a difference of opinion.