Had Zubin Mehta been a Baul singer from West Bengal, an undisputed part of India, set to perform in Kashmir, would the separatists and civil society have an issue with it? Unlikely, despite Jammu and Kashmir’s fear of India imposing itself on the state.

1500 people will witness the ‘Feelings of Kashmir’, if the protest groups allow Mehta to perform at the Ehsaas-e-Kashmir concert with the Bavarian State Orchestra on Saturday, September 7. From the airport to the venue at the Shalimar Mughal Gardens, the fortification is complete.

The objections are stunning in the simulation of elitism. People will be discomfited by the cordons, is one such. Is this not the point being emphasised – that the state is indeed barricaded or, as Hurriyat Conference’s hardliner faction leader Syed Ali Shah Geelani likes to repeat in EU's words, just a “beautiful prison"?

In the battle between the sweet pill and the bitter pill, the multiple organ failures are forgotten. Nobody comes out unscathed.

Something unconnected with the aspirations of the people often appears to give temporary relief. Chief Minister Omar Abdullah is known to offer placebos by way of parks, ski resorts, motor racing. This too is a separatist cocoon quite removed from the issues the people are fighting for. After his initial silence, he came up with the magnificently redundant statement: “Everyone has political views but music is in our culture. To present music as outside the Kashmiri tradition is not right.”

Cultural intervention is a known device, and it is important to define it holistically. It is possible to assume that by not permitting a western classical performance there is ignorance about it. This needs to be factored in while considering why people are opposed to it.

Extreme attitudes obfuscate. The universality of music is not in question here, but while it may provide a balm to individual souls it is egregious to speak in terms of groups, whether for or against.

The major concern seems to be that the concert will reach 50 countries and get wide exposure to convey that the state is “normal”. This is disingenuous. Bollywood films are shot there. Artistes visit the state. There is tourism, even if limited. They do not live in bunkers or hideouts. Have not academics and activists used global platforms to draw attention to the conditions in the state? How, then, can a handful of people alter this perception?

Geelani’s call for a bandh would have worked as dissent had he not supported the local cultural festival, Haqeeqat-e-Kashmir (Truth about Kashmir). If there is a strike, then who will attend this show? How would it be any less celebratory, even if the purpose is to highlight the suffering of the people?

This comes across as merely a reactionary idea. When Geelani said, “If the civil society organises any programme, it is in the interest of the freedom movement”, would he consider varied artistic expressions that are not about protest? How many music groups has Geelani supported? Local bands have been banned and a couple of years ago some Kashmir University students too protested, “Music is haraam and un-Islamic”. In Silencing Kashmir (CounterPunch, Feb 11), I had written: “Those who profess freedom of expression do not entertain even a devil’s advocate stance, which only reveals how close-minded and muzzling such ostensible independent thinking is. If we want to permit all kinds of thought, why do we seek to curb what in our opinion is regressive?”

Much of westernised forms of artistic expression may quite likely use the tragedy only as creative inspiration.

The dead cannot hear and beyond the YouTube subscribers and university halls few will understand, and fewer might want their lives replicated as elitist angst. There can never be a uniform standardised protest.

“With the magic power of music, crossing geographical, political and cultural borders, we want to reach the hearts of Kashmiris with a message of hope and encouragement as situation is challenging and daily life is not easy. This concert is for the people of Kashmir. Beethoven, Haydn and Tchaikovsky, played by a world acclaimed maestro and one of the best orchestras of the world in one of the most enchanting places in the world.”


In some ways, this too could work as protest, an acknowledgement of the need for hope. Is this an imperialist and patronising attitude? If it was, then why would Mirwaiz Farooq make a cringe-worthy statement? He said:

“I appeal to Germany and its ambassador that they should spend the concert money, which seems to be many crores, on the JKs ailing health and education. We are not saying that Germany should give this money to Hurriyat. But if the amount they want to spend on the musical concert would be used on upgrading health and education infrastructure, we will feel obliged.”


How will this obligation not lead to interference? Philanthropy is an easy route to enter markets. He seems to be asking for loose change and not awareness. Should the German embassy wish to offer such assistance it will be routed through the Indian government. Some others have spoken about how Germany should put pressure on India, instead. Would these acts not affect the disputed nature of the “conflict zone”?

Suppose Zubin Mehta had announced his support for the Kashmiri cause, would he have been acceptable? Would the money spent and the limited VIP attendance then be justified? Incidentally, the civil society planned to send out invites to the US, UK, German, and other EU embassies. This apparently would not amount to intervention.

The protest letter that went out to the German Embassy has, among other things, a problem with the concert being a “cultural tribute”. Taking issue with the press release, it states:

“The concert, said to be a part of a ‘broader engagement’ is being organized by the German Embassy and supported by the ‘competent authorities both at Central as well as at Union State level’. The costs of the concert are covered by ‘benevolent sponsors mainly from the business world in India and Germany, as well as Incredible India and the German Foreign Office’. The people of Jammu and Kashmir take immense pride in our rich history of resisting oppression.” 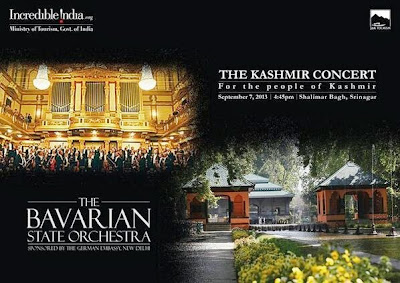 There is no denying this is a commercial venture, but to suggest that the list of invitees would be all co-opted by the “occupying state” would necessitate examining of the credentials of these activists, too. Who do they speak for? Are they not ‘invitees only’ in the revolt? Do they represent all voices of protest? There are Kashmiris who want freedom, but have no problem with such a concert. If the concern is with tagging of the “Incredible India” campaign, then one will have to start questioning how even separatist leaders use the Indian passport. Separatist aspirations of the region have been sanctified in Article 370 that does not even permit Indians from other states to invest there. However, this is within the Indian Constitution, by virtue of which the state is at the mercy of it. Therefore, the leaders are pragmatic enough to realise that resistance from within has greater validity.

The letter further states, “The Nuremberg principles clearly established that to be complicit in crime is to commit crime under international law. There is no place for silence.” Had Zubin Mehta refused at the very start by saying that Kashmir was dangerous territory, would it not have demonised the state?

There is a fear that such a show will signal that all is well. When the soldier-civilian ratio is 1:5, it is hardly a peaceful place. However, three militant organisations have issued a threat if the performance is held:
“Our mujahideen in the valley will target the western tourists and its responsibility will be on the German ambassador.” This conveys the impression that Kashmir has bartered its ‘moral right’. The fight for azaadi (independence) has emphasised the excesses of the security forces, especially towards civilians. Extremists threatening tourists takes the mickey out of this real issue. It was bound to happen when the state’s rebels grant licence for a siege by outside 'caretakers'.

While it is important to expose human rights failures, workers on the ground in Kashmir have been working towards this goal; separatist leaders are also routinely put under house arrest. They do not have identical goals. It is the more visible activists, wearing the ornamental badge of “pro-separatist”, who take over.

“Dear Zubin Mehta. Will your music weep for the martyrs, seventy thousand Kashmiris killed. Will your music bring back the thousands-disappeared in the shadows of the hills?...Be careful great conductor. Your baton may prompt a wail. When human souls are chained, both peace and music fail.”


Why is he then using music? Ironically, he is a politician from the Trinamool Congress Party in West Bengal that does not have a very egalitarian record. Yet, today he is seen as the sound of sanity in Kashmir. The activists and urban youth do not realise that the intrusion they are wary of can come in different garbs.

Some of the voices that support autonomy – and I might add that I do – also get noticed by the corporate media. Words that creatively spout protest, clawing at the entrails of the wronged, have tasted blood. Zubin Mehta will go away, limousines in his trail. What will the Kashmiris do about those who feed on every carcass to sanctify their concern? The halo cannot hide the masks of the publicity-seeking mavens. Their twisted tongues shouting azaadi conveniently decide on what version of freedom suits them.