Aam Aadmi in the time of Elitism 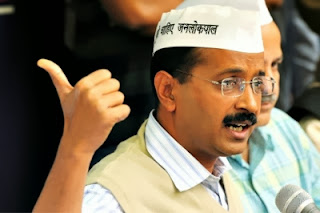 When there are attempts to sabotage, one need not jump the gun about the popularity of the player. The fact that Arvind Kejriwal has chosen the capital as his debut with the Aam Aadmi Party (AAP) and his promise that post assembly elections he will convene at the Ramlila grounds is a clear indicator that he has merely politicised activism rather than it being the other way round.

The media, saturated with the BJP and Congress, finds Kejriwal a good drumbeater to have. He claims to have collected Rs. 12 crore in donations from 12,000 families, and in a transparent manner. This sounds plausible. Rs 10,000 on an average contributed by one family is feasible. But, will it have an impact? He says:

“We are setting the agenda as far as Delhi politics is concerned. We raise people’s issues, be it water and power bills or women safety. Other parties follow us."

There is absolutely nothing new about this. Paani-bijli are old slogans, and women's safety has become the calling card for politicians. Let us not forget that it was politics that drove certain recent fast track courts and verdicts too.

Kejriwal is entering the fray when the anti-incumbency vote has become an intrinsic part of the scenario. It is important to question whether it is a 'There is no alternative' factor at work here or a genuine acceptance of the AAP philosophy. This would lead us to further ask what exactly the party's philosophy is. Can it sustain interest on the basis of anti-corruption and the Jan Lokpal Bill, when both are essentially part of a street fighting startup venture?

What does a headline like "How AAP made the common man relevant in democracy again" really mean? To begin with, Kejriwal is the product of our democracy, not its creator, and certainly not a renaissance figure. As regards the common man, which common man has been walking in Lodhi Gardens with a cheque book to contribute to his cause? What kind of common man is really affected by corruption as hidden in Swiss banks and invested in antiques, when he has to deal with chai-paani demands and is sometimes the one making such demands?

The "surge from the bottom" is a falsification. The movement against corruption was and continues to be an upper middle-class conscience picnic. The 'I am Anna' caps have been replaced with 'Main Aam Aadmi Hoon', which does not sit well with the common man who might have no roof over his head, but is given a topi. The other slogan of 'swaraj', self-rule, negates a democratic India, by harking back to a colonial era term. Who will decide on the nature of the community that is to be built? Will there be no hierarchy at all?

There are issues with Indian democracy, and political parties have been used by dynasties and cult figures. One does not see how Kejriwal is going to change this for, besides him, no other person has any recall value in the AAP.

To consolidate it, even the conspiracy theories use his name. Take this "hidden campaign" business. A recorded phone call from 'no political party' goes like this, according to a report:

"Hi, I'm Sri Om. I used to work with India Against Corruption when Anna Hazare and Arvind Kejriwal led the campaign. But Arvind Kejriwal colluded with the Congress and made his own political party with their backing. Arvind Kejriwal betrayed Anna. A person who can betray his own men can betray anyone. I therefore, request you not to vote for Kejriwal in the coming Delhi elections."

The article poses some interesting possibilities:

Is it the Congress trying to scuttle his chances? Is it the BJP trying to cut its losses by asking people not to support AAP? Is it some disgruntled element from the past? Or finally, is it AAP itself trying to garner 'sympathy' votes?

It could be any of these. Or it could be a supporter who wants to make sure her/his donation goes through an 'agni pariksha' and comes out a winner. There really is no free lunch in politics. Or anywhere.

Also Insulting the broom on Kejriwal's election symbol.
By Farzana Versey at 7:42:00 pm