No Method, No Madness: The Subtlety of Farooq Sheikh 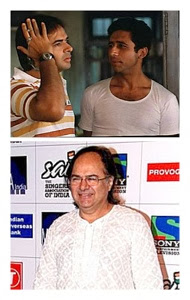 Farooq Sheikh was probably nobody's favourite actor. Few parents might have looked upon him as an ideal son in his early days, and few women swooned at the sight of him, and few children tugged at his shirt imploring, and few peers felt threatened by his image.

Yet, why is it so easy to remember the characters he essayed, as though they are etched deeply in the heart? Some might think he played the man-next-door, and was therefore identifiable. I do not agree. In fact, there was a touch of stardom to his persona, for every ordinary bloke he was on screen there was the Farooq Sheikh stamp — a slightly hurried manner of speech, the way his hair flopped over his forehead, the shuffling gait, and the thehrao...there are quite a few words in English that would explain this, but none has the quality to stop us for a few seconds in pause mode to pause. I'll settle for tranquil.

He died at 64, and his last film Club 60' was about a couple of senior citizens coping with the loss of a son. It has been on my "to watch" list, but I already know how he would have dealt with it.

Does it mean that his performances had no surprises? No, it is just that they came with added sheen and finesse. For someone who cannot be slotted as a method actor, his spontaneity shone. He was the unheralded mascot of directors like Sai Paranjpye and Muzaffar Ali. In the former's movies about everyday trial and tribulations, garnished with humour and charm, he fit in as though to the manner born. In Ali's 'Gaman', who can forget the helplessness, the silent ache of making a living in a big city, connected to love through the crossed cable wires beyond reach? Who can forget him as the reluctant nawab in love with a courtesan in 'Umrao Jaan'? Who can forget him again as a sidelight in Satyajit Ray's 'Shatranj ke Khilari' (the chess players), as a pawn in the bigger scheme? Who can forget him as the unkempt, unemployed youth who cannot save the girl he loves from being sold to a rich Arab in 'Bazaar'? Who can forget him in this year's huge hit 'Yeh Jawaani Hai Deewani', where as the father of an errant son his love pores out of every extra fold in his face and brightens a room that seems always so dark?

In many ways, his film journey was like the start of 'Katha', based loosely on the hare and tortoise fable. Pitted against no less an actor than Naseeruddin Shah, who was the tortoise here, Sheikh took on the hurried hare with a disarming rather than a devious smile. His cocky twirling of the keychain, the languid moves, the showing off, all like a pinch of extra salt. He did not need poison.

His own career was more tortoise-like, slow and steady. He did not win any race, for he participated in none.

In the past few years, he was added to the list of panellists on news channels always looking for that elusive 'nice Muslim'. Except for maybe one occasion when I did not like the way he allowed himself to be projected, I felt that however much the fake moderate/liberal cultural Indian Muslim bogeys tried to co-opt him, he stood apart. He lived a pluralistic life, and did not feel the need to shout about it or even see this as something unusual.

It was so like his performances. He was not celebrated, he was not dismissed off. Perhaps, this was a good thing. Subtlety leaves no marks, but is something you remember without even trying for it does not fade away.