Published in CounterPunch and Countercurrents 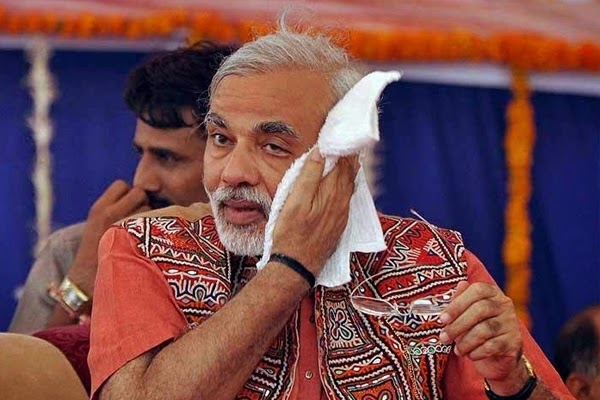 Mad Hatter: “Why is a raven like a writing-desk?
“Have you guessed the riddle yet?” the Hatter said, turning to Alice again.
“No, I give it up,” Alice replied: “What’s the answer?”
“I haven’t the slightest idea,” said the Hatter.
(From ‘Alice in Wonderland’)

Think about Narendra Modi as loser. Almost everybody, including his detractors, has been talking about the Bharatiya Janata Party’s prime ministerial candidate in terms of victory. The reason is the so-called ‘wave’, which ought to be a cue for the ebb. Why, then, are the experts not conceding even the possibility of such a scenario?

Poll watchers in India are clutching at straws. It might seem like a spontaneous, even kneejerk, response to the countdown to the general elections that begin on April 7 and conclude on May 12 with the democracy anointing one privileged autocrat over another. But, much of new thought is regurgitation of stodgy ideas about cults.

Modi is the face, body and soul of the BJP, and several masks. These masks are not self-created, but given to him at regular intervals to suit a particular point of view. Somebody pulls the strings and he dances to it. When we watch a puppet show we look at the suspended character or a shadow figure, not the string-puller or the hands. Modi is getting a taste of his own stunts. During and soon after the Gujarat riots, he made sure that no mud stuck to him. The deaths in the riots, the encounter killings, the transfer of police officers and a huge spy network to keep tabs on his own people should have made him a criminal at least for the sin of omission, if not abetment. If he walks free today, it is because the courts say so. Courts depend on evidence. He knew that, and left no traces that would pin him down. In fact, he cooperated with the judiciary. He showed off that there was communal harmony in Gujarat, which he transformed into his personal fiefdom. He spoke for five crore Gujaratis, including those who continue to live in relief camps.

What was clearly an example of what was wrong became a test case for the BJP to propagate its idea of right. Modi is not the General, but a foot soldier, a facsimile of those he pushed in front to shield himself in 2002. The danger in making such a statement is that it might be construed as indicative of his helplessness. It was implied as such by senior journalist M.J.Akbar, who flirted with Congress politics 25 years ago and joined the BJP recently, and is now its spokespersons: "In ten years, no other politician has gone through so much scrutiny as Modi has gone through. He was scrutinised by police, central government, CBI, court-appointed institution...”

For all his spontaneity and brusqueness, Modi is a shrewd tactician. He does not mind being used. On his own, he is at sea, whether it is regarding foreign policy, history, the economy, and of late wildlife protection (he said there was poaching of rhinos in Assam to create space for Bangladeshi immigrants). He resorts to homilies because facts would expose him. This works for his audience – and he is primarily a performer – because facts lack sex appeal. They are mundane obstacles to reach the goal post. He gets on a magic carpet, instead. The remote control of this ‘magician’ is in the hands of the Sangh Parivar, a motley backroom group of rightwing organisations that decode India for the BJP.

This is the India that sees the ‘dev’ (god) in development, the one word chant of Modi. How would it play itself out?

Astrology, singing of Vande Mataram, vegetarianism, cow protection, cleaning the Ganga are essentially social issues, and challenge mores at the most. They cannot cause paranoia.

Who is keeping the fear industry alive?

Yet, to suggest that this should be feared is naive. It ought to be opposed from the viewpoint of common sense, and if anything it is Hindus who should be afraid. The same leader believes there is “de-Hinduisation” and, “Only when they produce five children will the population of Hindus remain stable”.

There are people who believe that Modi is not quite the prototype Hindu. Ashutosh Varshney of Brown University wrote about how his “ideological departure is even more striking...Modi...paid tribute to Maulana Azad, a towering Muslim leader of India’s freedom struggle and the first education minster of independent India.” Why is it unusual and how does it make Modi a moderate that the headline touted? More importantly, if it goes against the idea of Hindu nationhood, then that idea itself must be disabused, instead of rationalised. It is a futile exercise to demonise a leader who reaps benefits from it, but this overarching attempt to understand him unveils the face of soft Hindutva as practised by middle-class intellectuals. 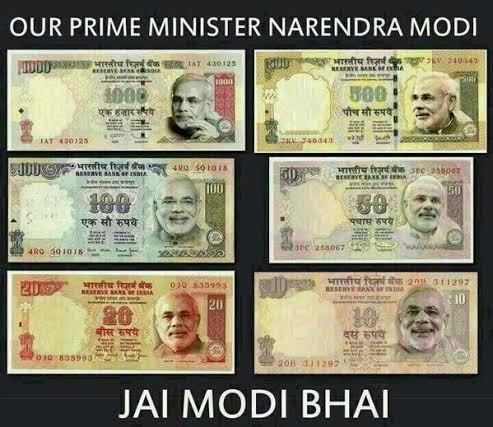 While the bulk of the middle class is taken up with the mythology of a leader, rationalisation of his actions has rarely been their flaw. They are more akin to the business lobby that seeks to barter with moralistic undertones. During the Vibrant Gujarat summit last year that catered to the fossilised depravity of corporate India, industrialist Anil Ambani cooed, “Narendra Bhai has been described in different ways. My personal favourite comes from what his name literally means in Sanskrit - a conjunction of Nara and Indra. Nara means man and Indra means King or leader. Narendra bhai is the lord of men and a king among kings.”

Modi’s own self-perception factors in his Hindu identity as he expressed in this interview to Reuters: “I’m a Hindu nationalist so yes, you can say I’m a Hindu nationalist because I’m a born Hindu. I’m patriotic so nothing is wrong in it. As far as progressive, development-oriented, workaholic, whatever they say, this is what they are saying. So there’s no contradiction between the two. It’s one and the same image.”

Will India become a Hindu nation?

This is a fantasy, and like all fantasies it causes performance anxiety. This leads to overt bravado in the public sphere. In 1992 when the BJP was not in power, it demolished the Babri Masjid at Ayodhya that led to riots killing almost 2000, mainly Muslims. A year later in March, there were bomb blasts in Mumbai, ostensibly orchestrated by don Dawood Ibrahim. The culprits were caught. It was termed a terrorist attack on the financial capital. Those who engineered the riots in the same financial capital and destroyed property were not called terrorists, no major arrests were made and despite newspaper and video footage showing the active participation of the leaders, nothing happened. India voted for them. After the Gujarat riots, the same happened in the state. Which India is this?

It is an ugly truth that not many wish to face. Ignorance of liberalism as a political philosophy leads both Hindus and Muslims who do not profess fundamentalist thoughts to anoint themselves and each other as secular liberals. They who berate the infiltration of religion in matters of state propagate both minority and majority ideas of privilege. This is the stereotype of the rightwing that they have adapted. From economist Amartya Sen to writer Amitava Ghosh, they have said they do not want to see Modi as prime minister. They do not decimate the Hindu Rashtra with as much force.

This passive-aggressive template is as much about Hindu nationhood, in this case as protector. There is something effete and quite insulting for Muslims to use fable-type examples of amity to brag about their liberalism that has to be endorsed by an amorphous band of Hindu liberals. The culture of handouts expects some returns, in this case an assertion that India is a secular nation because of Hindus. It also means seizing every opportunity, including echoing the blatantly colonial tone employed by The Economist: “If Mr Modi were to explain his role in the violence and show genuine remorse, we would consider backing him, but he never has...”

He cannot. The RSS had just a few days ago insisted: “All this talk of Modi being replaced or somebody being appointed deputy PM is plain bunkum. Everything will depend on what Modi wants after the results. Either it will be Modi as PM or the BJP decides to sit in the opposition.” In democratic India the BJP is the only national party that has an organisation with a shady background as its prompter on national affairs.

Modi’s problem is not that he is an outsider, as some suggest, but that he is embedded deep inside an organisation that has propped him up only because it has him hostage.

Important allies have left, some like Bihar chief minister Nitish Kumar because of ego clashes. Jaswant Singh has been debarred for six years because he felt slighted and decided to contest as an independent. L.K.Advani has written letters to the office-bearers against the party’s way of functioning, and had opposed Modi’s elevation. All of them are seen as ‘sulking’, even by Modi’s detractors. This is what the BJP/RSS is looking for and what the nation is ignoring. Modi is not just a divisive force because of 2002, but 2014. He cannot keep the party that flaunted its discipline unified. The person doing so is Rajnath Singh, who is taking his role as king-maker a bit too seriously. He issued a statement to Muslims: “Try us once. If we don't come up to your expectations, don't look at us ever again.” This was a masterstroke, for the party already had a chance when the NDA ran its full term under Atal Behari Vajpayee who had famously supported Modi with an, “I am his advocate and it is my duty the plead his case”.

The idea behind talking about a chance is also to erase the post-Ayodhya riots as the construction of the Ram Mandir is a crucial part of the BJP manifesto. The recent sting operation by Cobra Post said nothing new about the role of its senior leaders, but was impeccably timed. It does not save the PM-in-waiting from the slur of being the only riot-tainted leader, but shows him the mirror by his own party members.

Narendra Modi has lost before he can even win.