Do Indian Muslims need a clean chit from Modi? 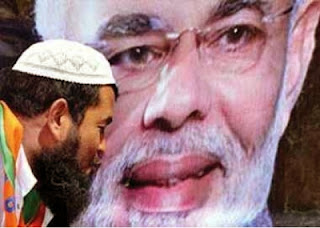 Prime minister Narendra Modi has been applauded for this remark; some have even referred to it as appeasement.

It makes me seethe with anger. Not because I will not appreciate anything that he does, but because this is a loaded statement. The vanilla is all about it being the first international interview since he took over. Fareed Zakaria obviously led him to this juncture for what would be acceptable to CNN.

Here, he is giving a certificate to 170 million Muslims who are citizens of the country in response to an al Qaeda video. Does he imagine that Muslims in India, among the poorest, are glued to the internet to access such messages? What does he have to say about the fundamentalist rightwing organisations in India that lure youth who, with their student wings, terrorise people?

What exactly does he mean by Indian Muslims "will not want anything bad for India"? Such a comment is pathetic, the subtext being that even if they don't do any good, they won't wish evil. Clearly, the only evil would be from their supposed compatriots like the al Qaeda. In the Modi scheme, Indian Muslims are susceptible to getting lured, but because it is all so good for them in India they will not fall for it. To prove they are truly Indian, they will live for the country and die for it. That is the condition for their citizenship.

Those taken in by such candy floss are the ones who live in their culture cocoons of mindless parables. They are not the ones who are hauled up on suspicion; they don't need reservations; they don't have doors shut on them when they go to rent a place; they don't live in ghettos forced upon them.

Instead of giving a clean chit to Indian Muslims, Mr. Modi should pull up the hate mongers in his party who have openly declared war against Muslims, including threatening to kill. He has been silent. Not a word. Why?

From the excerpt of this CNN interview, it appears that he is catering to the country that denied him a visa earlier but is now welcoming him as a leader. His excitement is palpable:

"Let me explain — there are many similarities between the U.S. and India. If you look at the last few centuries, two things come to light — America has absorbed people from around the world, and there is an Indian in every part of the world. This characterises both the societies."

America is also very Islamophobic. The Al Qaeda was America's fight. Modi is playing along with this. He is happy to help. And what better way than to drag in Muslims. Yes, we can. We can be nice to Muslims, but only by constantly badgering them about some al Qaeda video. Yes, we can accept Muslim patriotism, but by reminding them that they have to live and die for the country.

Please tell me another one.

The constant refrain by certain Indian Muslim organisations condemning all manner of terrorist activities they have nothing to do with reveals just how much they are being made to cow down. However, for some it is opportunism to prove they are more noble than the rest.

Sitting in their pretty homes, they do not have to deal with filth. But they are so selfish that their condemnation for what is distant draws attention to the less privileged Muslims within the country. It takes a few seconds to condemn and be rewarded with the badge of liberal and secular.

The establishment can depend on them, for they will gladly take droppings in return for calling out the innocent. The guilt lies in their minds.
By Farzana Versey at 7:30:00 pm