Charlie Hebdo and the Rightwing 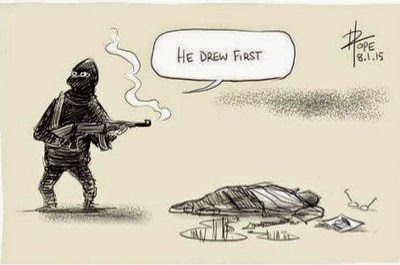 Normally, society should react by sympathising with the families and mourning the deaths. There should be anger against those who indulge in such barbarous acts.

In India, the reaction is to pounce on Indian Muslims. In fact, it appears as though the rightwing lies in wait for just such ghastly incidents so that they can whitewash their ridiculous attempts at fascism, that is assuming they understand it at all. The media has used this opportunity to suck up to the powers that be. A TV anchor who is called "paid media" by the rightwing is now glorified by them for her 'bravery' in putting up the Prophet cartoons on her show. Perhaps one should ask them how much they paid her then.

The mandatory and civil RIP has become a mockery because it is insulted by these so-called concerned people whose real agenda is to taunt imagined Islamists who they can claim to be threatened by. It, therefore, follows that they can empower themselves to threaten others as "self defence". All this happens in the virtual world where anonymity ensures that straw warriors are actually heard despite their tacit terror tactics.

Amazingly, one is accused of being an apologist by the very people who are apologising for the rightwing. By flaunting "Je Suis Charlie" (I am Charlie) they flout the very principles of freedom.

Here are the series of tweets I posted this morning:

• Why #JeSuisCharlie ? Why can't we be ourselves & express our views on FoE instead of such temporary, superficial and selective solidarity?

• If you hadn't heard about #CharlieHebdo before and now use it to bash up people who have nothing to do with the killings, your FoE is suspect.

• Why glorify an 'Ahmed' killed in #CharlieHebdo attack? Do we feel better if a Muslim is also killed by terrorists who claim to be Muslim?

• Such tragic events show up selective FoS. Rushdie will remind you. He is such a 'champion' of FoE that he apologised for some of his views.

• Rushdie is once again reminding you about the fatwa. Does nobody want to remind him too about false equivalence with #CharlieHebdo?

• For me, #CharlieHebdo and other cartoons are incapable of insulting the Prophet. They reveal a mindset that thrives on Islamophobia, though.

• Somebody tears the Quran, another flushes it down the toilet. It tells us about the people doing it rather than the Quran.

• So what terrorists do should tell us about terrorism. 'Islamic terror' isn't about Islam, but terrorists who claim Islam. Their problem.

• You accuse me of hypocrisy and secularism because I ask some questions? What do you want? That I dance to your tune? Where is FoS now?

• Friends from the Hindu RW, I applaud your commitment to FoS. Instead of baiting me, show your love by posting cartoons about your deities.

• I agree. The Prophet is not hurt. Neither will Lord Rama/Lord Ganesha be with such cartoons. So those asking me, return the favour. Thx.

• Hand on my heart, my Hindutva friends, I shall stand/ride with you should there be a backlash against you for art/cartoons you post. Will you?

• Before we sing praises of France and its record of FoE, perhaps we'd like to consider that it has banned the use of veils. A clothing choice.

• "All I want is to live in peace" France, FoE champion would not let this Muslim woman do so. theguardian.com/world/2014/jul…

• And to Muslims bending over backwards to please political masters, I have only one question: Yeh kaunse khuda ke dar pe sajda kar rahe ho?

• Indian papers/TV channels carrying the #CharlieHebdo cartoons are not about #FOE, but sales, TRPs, political scrounging. No free lunch for FoE.

• You accuse me of selectivity? Have you shown yours yet that you voyeurs want to see mine? Again and again?

My earlier piece on Charlie Hebdo's role in Middle East politics: Arab Sting — The West is bitten and sly

Now this radio host says it could be a false flag operation. Think he is jumping the gun.
By Farzana Versey at 11:46:00 am