Shuffled off this mortal coil

"It was my duty to make a film on Kashmir. More than a duty, it was my job to reflect the reality, as I saw it." — Vishal Bharadwaj

It was a picture that had more shadows than light. I was framed beneath a tree sitting as I would in a chair, my legs crossed. There is a slight frown and a sense of dislocation in the expression. Behind the black and white print, my classmate and friend had scrawled, "For Hamlet..."

The main reason I was Hamlet was my indecisiveness, apparent in the monologue, "To be or not to be". However, it was a play that I lived with beyond the literature lectures. 'Hamlet' had opened the world for me, had mirrored life in analogies. That picture is, therefore, me and yet not quite me. 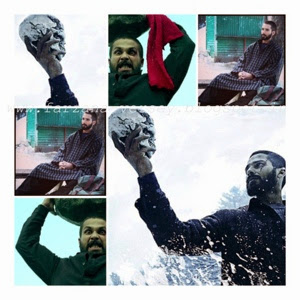 A couple of months ago when I took the leap from my picture to the big picture, I realised that analogies work best with the real. Although I tried to avoid reading critiques of 'Haider' because I wanted to go to it blank, blankness is near impossible considering it is located physically, politically and emotionally in Jammu and Kashmir.

I made a few notes after watching the film and then, perhaps one of the rare times it has happened, I did not post anything. Today, I am revisiting because its director Vishal Bharadwaj has written about the problems he faced due to unofficial censorship. There was a good deal of talk about official censorship. Truth is this:

In his personal account, Bharadwaj recounts how he felt bogged down by the protection he got:

"People called Haider a brave film but you know what was the price I had to pay? Because of the threats, I had to move around with a personal security guard. No matter where I was - whether in the car or playing tennis - the guard would guard me all the time, impinging on my personal space. Forget about freedom of expression, my own body's freedom was at stake now."

The title of my post is a phrase from the monologue in Hamlet that follows "perchance to dream". In 'Haider', the cusp between the mortal and the dream is lit by the brilliance with which 'To be or not to be' transmogrifies into 'Hum hai ke hum nahin', that can be seen as 'Am I or am I not', but also 'Are we or are we not':

"Whose side are you on," Ghazala asks her husband, Dr. Hilal Meer.
"Zindagi (life),” he says. It is a professional duty statement of a doctor. More importantly, it politically establishes whose side the director is on, despite his claims of being "an objective observer". Opinions cannot and must not be objective to be alive. Life in 'Haider' is not the opposite of death, but the affirmation of it even in the face of death. And the state of Jammu and Kashmir has seen too much death – death in custody, death in the streets, death in homes.

The political azaadi is also about emotional freedom, more pertinent today than ever (what with the regional parties willing to ally with the rightwing BJP that is using J&K to score). There was some criticism about how it was a cop-out to reiterate in the film that one has to be free of vengeance. It was seen as a critique of Kashmiris and their fight for autonomy. Far from it. This is a life-giving thought, a need to purge the soul for a people who have been forced into numbness rather than aggressiveness. That man who cannot enter his own house because he is so habituated to being frisked and pushed before he can move conveys just such a sense of stasis.

Haider is not the, or a, hero; he is the sutradhar — the chain connecting events and places. His relationships define the state.

All he shares with his 'disappeared' father are memories. The doctor who treats a militant is taken away during a parade, and it establishes without any obfuscation how the army operates in J&K. There are no checks on the manner in which authority is asserted and abused. Even had there been no torture scenes, this one sequence would have been sufficient to damn the role of the armed forces and the rightly-maligned and questioned AFSPA. Sloganeering does not always convey much. At least not in cinema.

More pertinently, the ghost of the army looms throughout. Even as the grave-diggers sing about sleeping in the graves, they are fired upon. 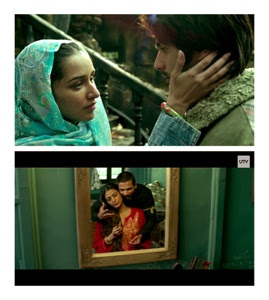 What Haider shares with his mother Ghazala is less obsession and more desperation. Ghazala as mother(land) is poisoned beauty ("zeher ki khubsoorat", he says, as he sniffs the fragrance she applies on her neck). The sensuality and hint of incest (taken from the original) is a metaphor for the strong sense of identity that has to slake its thirst with such passing moments. Kashmiris believe with such finality in their Kashmiriyat and yet they feel displaced in the land.

Arshia — Ophelia redux — is the polity: helpless, supportive, craven, and ultimately tragic. It is the little touch of her brother working for a multinational firm together with the two Salman Khan fans as jesters who convey the role of the mainstream in the state. They all let Haider down.

Roohdar, the ghost, is a secessionist here, carrying the message of the presumed to be dead father. That Haider is by turns suspicious and attracted to him forms the crux of displacement.

Faiz plays in the background, most tellingly in the voice of the uprooted father:

Let there be colours in the flowers,
For the breeze of new spring would come.
Come, so that the garden can continue to bloom
By Farzana Versey at 7:31:00 pm