Who is communalising the hanging? Owaisi vs Sakshi Maharaj 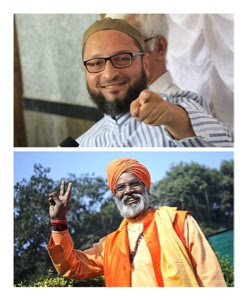 There are many people who speak out against capital punishment; there are a good number of Indians who believe that Yakub Memon should not be given the death sentence. He has already spent 20 years in jail and is medically certified as a schizophrenic. The court has rejected his curative petition. He is scheduled to be hanged to death on July 30.

I have already written about the case here, but it is disturbing to watch how the public is being swayed in the name of nationalism. Even those who do not want him to be hanged seem to have a problem with any Muslim "communalising" the issue.

Let us stop fooling others and ourselves. Muslims have not communalised other crimes. This was and is a communal issue. Why is it that only the blasts are seen as communal? Because the culprits were Muslim, and it was said that this was their vengeance for the 1992 riots? Muslims suffered in the blasts too, their businesses were destroyed. Hindus too suffered during the riots, but the main targets were Muslims.

Therefore, when Asaduddin Owaisi, chief of All India Majlis-e-Ittehadul Muslimeen (AIMIM) asks questions about the hanging of Yakub Memon how does he become communal whereas others can say the same thing and be 'Indians'?

He did raise questions of discrimination. He also said:

"The killers of Rajiv Gandhi and Beant Singh have the backing of political parties in Tamil Nadu and Punjab. Which political party is backing Yakub Memon? Shiromani Akali Dal in Punjab has gone to the extent of pardoning Balwant Singh Rajoana."

Owaisi is speaking as an Indian; he is referring to law and the Constitution. It is not a law of the high born or the Hindu. It is a law for everybody.

He has every right to speak about Muslims, not because he is a Muslim but this is a human rights issue. In any civilised society capital punishment leads to introspection. It is not about dancing on the rooftop claiming to be more patriotic that the next person.

I watched a TV discussion last night where the above-mentioned incidents were dismissed as individual efforts that were not as much a threat as Pakistan and ISI. When Owaisi pointed out that the LTTE and Khalistani elements could be a threat too, the anchor, good Mr. Arnab Goswami, started screaming about how he was SHOCKED that Owaisi was taking up for the ISI.

So this is not about India. It is about Pakistan. The Indian government is frustrated that it cannot bring back Dawood Ibrahim, and will use any means to get back at that country. Prime time divas thrive on warmongering.

"People who can't respect Indian system and judiciary can go to Pakistan, door is open."

Sakshi Maharaj is a career sadhu; he has got into Parliament for this reason and not because of any other qualification. Such people have the gumption to abuse others for communalism when their very existence and calling card is communal; he speaks about how Hindu women should produce more children so that Muslims do not overtake them. His commitment to the Indian judiciary is selective, and if the party leadership were strong he would have been shown the door using the same judiciary.

I usually don't like to grant any legitimacy to such utterances, except that this one once again uses the fake nationalism card to discriminate.

While upholding his death sentence, the Supreme Court described Yakub Memon as the "driving spirit" of the blasts. This is clearly a way to wash hands off finding others. And it also makes me wonder about all those "driving spirits" that have inspired riots in different parts of the country as well as the "driving spirits" who continue to occupy positions of power to divide the nation with their bigotry by feeding them with false notions of nationalism.

Waiting for a man to go to the gallows does not prove your patriotism one bit.

"Much is being made of former Research and Analysis Wing (RAW) chief late B. Raman's 2007 piece that has been published now. As an insider, he had explained why Yakub Memon should not be hanged."

He had come to Kathmandu secretly from Karachi to consult a relative and a lawyer on the advisability of some members of the Memon family, including himself, who felt uncomfortable with Pakistan's Inter-Services Intelligence, returning to India and surrendering to the Mumbai police. The relative and the lawyer advised him against surrender due to a fear that justice might not be done to them. They advised Yakub to go back to Karachi.

None of this is new and its publication now adds nothing. In fact, it only leads to conspiracy theories about how it is timed to influence the mercy plea.

What will influence the mercy plea is more direct and unethical — the Maharashtra state home department has asked the governor to reject the mercy plea. What is the basis for such intervention?

Received an email from somebody who knows the law better than I do. Regarding my last bit about ethics of state intervention, it is legal:

"The state/centre's Home Ministry is duty bound to give its opinion on a mercy plea. However, it is still being debated- whether the governor is bound by such opinion."
By Farzana Versey at 8:23:00 pm