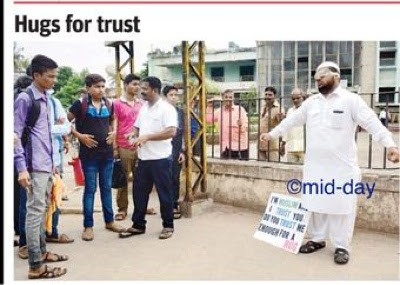 I want to vomit all over this. A man stood in a public space in Mumbai with a blindfold, his arms stretched out. The placard near him read:

"I'm Muslim and I trust you. Do you trust me enough for a hug?"

This is utter nonsense. It is one thing if such pantomimes are forced upon immigrants in the West, but why must Muslims behave as though they are dependent on the hospitality and large-heartedness of a benefactor state or community? They are a natural part of the country, and don't have to prove anything to anybody.

Such temporary drama helps no one and in fact has a deleterious effect on the onlookers because the huggers will most likely be those who are anyway quite comfortable in a pluralistic ethos. Now suddenly, after becoming more public via the media and Internet, they will begin to view their act as some sort of charity, a doling out of trust.

This is the sort of beggary that justifies majoritarianism. And it does not surprise me that the liberals are calling this a wonderful story, given their penchant for the cute varnish, and the fact that their business thrives because they are the precedent that forms the template of such charitable concern for the minority. Remember the 'put the hand on the shoulder of the Muslim man in front of the Taj Hotel' act after the 26/11 attack by a star anchor? That man was just somebody who had gathered there, perhaps in a show of support against terrorism (another mandatory gig for Muslims). The impression it gave was that in some ways all Muslims will or should feel guilty. Unless of course the saviour says otherwise and legitimises them.

It is time Muslims stopped playing into this devious lot's game-plan of swooping down on just such acts.

If people mistrust you, then honestly they have to bear the onus of suspicion for it arises not from reason but fear of imagined demons. And you can't conquer that for them.
By Farzana Versey at 7:02:00 pm