Aylan Kurdi and the Swarm of Tears


Galip Kurdi lay dead a few feet away from his brother. There are no dirges for the five-year-old, as innocent as Aylan, as much a refugee seeking a life, without knowing the meaning of it. Their mother drowned too. Nine other people lost their lives trying to escape from a home to a mirage or, if they were fortunate, an oasis.
They are just numbers, and if we have good pictures around then they become scattered belongings on shores, their bodies swallowed by waves.
Symbolism
It is Aylan Kurdi’s fate to be killed twice. Once by the waters that pushed his limp form ashore and then to be drowned in the swarms of tears. Swarms. A word made notorious by David Cameron to suggest that refugees are a marauding horde or insect-like nuisances taking over. Swarms of tears also take over. The debate today is centered on self-deprecation, a luxury that a few can indeed afford. The arrogance of such publicly sanctified humility belittles the humbled and the bereft. 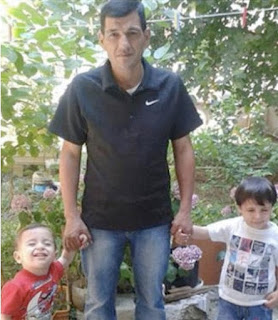 Abdullah, the father of the two kids, has lost his world. No country would matter to him. But have any of the lachrymose-ridden Op-eds offered him a home? What does the grandstanding self-introspection amount to? Let me give a few examples.
“What does Aylan Kurdi’s death say about us?”
It is fairly obvious it tells us that we cannot fathom a tragedy unless we have a visual representation of it and can feed off it. We create symbols not to symbolise a social problem but to use as a hat rack.
“Look at the photograph, and feel the pain.”
Only so that the writer of this piece can go into a detailed description of a child’s corpse, details that are evident? “His tiny shoes baring their sodden soles to the sky.” This has been the chorus: “Don’t shut your eyes. Look. This is what we have done.” Then sit back and watch as our sensitivity is clicked and shared. Do we even care that we transform a short life into a précis?
Piers Morgan then goes on to state, “I believe that if Americans had been allowed to see images from inside Sandy Hook school after the massacre of 20 young children in 2012, then new draconian gun laws would have been implemented within months.”
What laws have been implemented in spite of these Americans looking at pictures of racist attacks?
Abdullah Kurdi is pained. “…now the whole world is going to watch my story, where was the whole world before when my kids were hungry, when I didn’t have a job?”
Why did nobody ask us to identity with such a plight? Using the photograph as prompter, Nicholas Kristof tried to pass off his moral high ground as the world’s guilt: “If you don’t see yourself or your family members in those images of today’s refugees, you need an empathy transplant.”
Empathy is germane, not generic. Kristof had a background story, not everybody does. What the world feels today – or was it yesterday? – is collective sympathy. Social media has made it possible to buy empathy/sympathy across the counter although it is touted as a prescription drug.
Art and artifice
“The Post appears to be asking its critics to hand out artworks as antidepressants.” The writer of the piece was referring to the Washington Post’s Style section asking art critics to “meditate on the role of the arts in coping with grief” after the Sandy Hooks incident. Not chuffed with the idea, Phil Kennicott’s message was clear and might apply to the Aylan story as well: “I think seeking consolation during a tragedy that hasn’t directly affected you is histrionic, and a bad form of sentimentality, and it distracts from urgent and obvious feelings of anger and political determination. Rather than seek solace, we should work to change the society in ways that will help prevent this kind of mayhem.”
Why is there a tearing hurry to make a ‘telling statement’ on an ongoing crisis? “Thank you for the tragedy. I need it for my art,” said Kurt Cobain. It is unlikely that the artists who are now paying tribute to Aylan would be as upfront. Some great art owes its inspiration to tragic events, but was it created merely as a reaction? 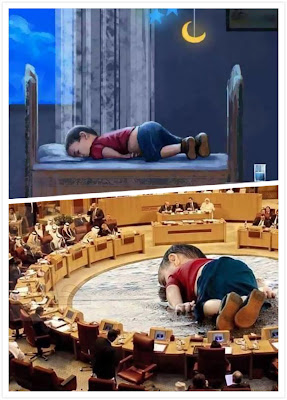 There is one image of a child lying face down in bed, the moon and stars chiming as twilight streams in through the curtains. “This is how it should have ended”, was the tag line. Is this how a child sleeps, a child who is escaping? Such artistic license implies that refugees are good life-seeking migrants when all they want, need, is a piece of earth and a piece of sky.
While it is important to taunt world leadership, placing a young child’s cold body at the centre surrounded by men in suits or keffiyeh in conference rooms with high ceilings makes it appears like he is something on their plate to be feasted upon.
Another artwork with the now-familiar image of the boy on the beach shows a plastic sand bucket and shovel in the forefront. Does this not convey that seeking refuge is a picnic, an outing?
Last year when four boys, sons of a fisherman, were killed in aerial strikes on a Gaza beach, some Israelis were posting ‘Bomb Shelter Selfies’. Art and social consciousness today seem as cocooned and vicarious.
Politics of benevolence
Alongside the news of the Pope appealing to parishes and monasteries to house one refugee family each and the Vatican making the move by sponsoring two families come reports of conversions.
The West uses the start-stop method often during social crises, the passive-aggressive strategy coming in handy. It would be foolish to assume that overnight some countries have had a change of heart. Governments often use foot soldiers as ‘fringe elements’ to do what political correctness prevents them from doing. Will the neo-Nazi groups that target immigrants be any kinder to refugees?
The same ugly face of ISIS is repeated to whitewash the saviours. Reports of a covert operation by ISIS gunmen entering the European Union among refugees seems to consolidate the phobia instead of assuaging it. Not surprisingly, conservative lobbies have their backup plan ready for explaining their reservations. I got this note from a Hindu rightwing person: “Migrants stream into Austria, swept west by overwhelmed Hungary - Arabs succeeded in exporting Pisslam to Europe without any Missionary work. Wait for an Islamic country to be carved out of European union. Just like India with huge chunk of muslim population, Europe will suffer.”

The criminalization of refugees is a real issue. The police in Prague were branding new entrants just the other day. Said activist Hana Frankova, “The Czech authorities are presenting them as criminals, and it resonates well with the public when they are detained.”
We may blame governments, but there are citizens who would not wish it any other way. A gush of online hashtag concern hubris will not alter that. The objectification of Aylan is the tragedy that has superseded the tragedy of thousands fleeing. The emphasis on this child, this shore, this event seems like event management to divert attention from what is happening everyday when dinghies do not capsize.
As one Palestinian posted, if it is dead babies that bring about change, we have many to show. I’ve seen pictures of other babies from Sudan to Kashmir, some from decades ago. This should bring tears to our eyes, the continual insensitivity, the building of houses of cards over the rubble of history.
By Farzana Versey at 6:18:00 pm