How to travel with Umberto Eco 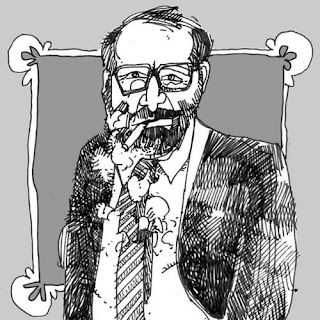 I go a long way with Umberto Eco.
To that flight to New Delhi. A cramped aircraft with no space in the overhead bin. I still remember my red suitcase that just wouldn't fit. Sliding it in towards my window seat, my feet then propped up on it, I saw that the guy in the aisle seat was livid. “Waith,” I heard someone say right then. A largish man with a brown beard and a genial face flashed his boarding pass. He was to sit in the middle. Once settled in, he beckoned the flight stewardess and asked her to make space at the rear. Reluctantly, and given his insistence, she let him drag out my bag as well as his portfolio folder, and deposited them there. “Ah,” he said, as one would upon being too pleased about a task accomplished.
The flight was delayed and we were sweating in the April heat. When we did take off, it turned out to be a rough flight. Snacks were brought; I clearly recollect the aloo tikki wrapped in aluminium foil, for as the trolley passed later to serve the passengers behind, he put up his hand and asked for a couple of more of those. It was utterly childlike and charming.
I had a magazine on my lap. He asked if he could take a look. There was something on pornography. He seemed surprised. “Indian magazine?” Yes, I said. I asked him if Ilona Staller was really a big thing in Italy. (By then this is one thing we had shared — our nationalities.) Staller was a porn star and an MP of some prominence. We spoke a bit about politics and women in it.
He was in the corporate sector of a huge firm. “We have these social meetings with our Indian counterparts and their wives. They do not discuss these things. It is all money, money, money.”
The two hours passed soon. We landed with a big thud. He fetched my bag and we deplaned. It turned out that his transport had been delayed. I offered to drop him off. It then struck us that on air nameless as we both remained, earthly contact might require some nomenclature. I told him my name. He did not tell me his. Instead, he took out his passport and showed it to me. “See?”
“Umberto?”
“Si,”
“Like Umberto Eco!”
“You know Umberto Eco?”
“Yes, of course! OF COURSE1” Delhi’s dry heat seemed to be melting the bones.
“Guth…you read him?”
Yes…and then we left.
Here was Umberto, but not Umberto Eco.
Dear readers, this was not meant to be a tease. The reason the memory came out so powerfully was because I saw the numerous photographs of Eco accompanying the obit pieces soon after the great writer, philosopher, thinker died at 84. The Umberto I met on the flight bears a striking resemblance to a younger Eco. Eco had said that in a play the players are mere presentation and have no bearing on the play or the direction it might take. Like it happens in life. 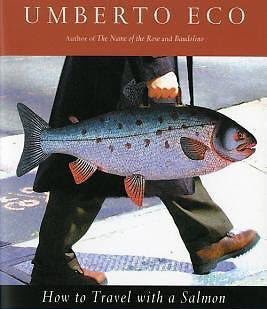 Eco did not suffer from the self-righteousness of academic rigidity. “The real hero is always a hero by mistake; he dreams of being an honest coward like everybody else,” he wrote. It was such open-ended thoughts that allow for debate. Here I’d interject: the false hero’s valour is then obviously dishonest. But is cowardice always honest and upfront? Often, people pretend to be doing something when they are in fact sneaking away.
The pretence too has a reason. In Eco’s words, “Nothing gives a fearful man more courage than another's fear.” This is probably something we already know, but the stunning simplicity of the statement stands out. It encapsulates the psychology of insecurity.
Similarly, he does not have much sympathy for ‘cause’ proponents: “Fear prophets, and those prepared to die for the truth, for as a rule they make many others die with them, often before them.”
Indeed, it is foot soldiers who die first, not the chiefs; it is civilians being ‘protected’ from dictators and terrorists who get killed in the ‘true’ fight by drone-happy saviours.
He does not have very kind words for the new online saviours too. “Social media gives legions of idiots the right to speak when they once only spoke at a bar after a glass of wine, without harming the community. Then they were quickly silenced, but now they have the same right to speak as a Nobel Prize winner. It’s the invasion of the idiots.”
He also moaned the fact that such people as well as journalists assumed the public was only ready for and seeking simple answers. Take a look around and you will notice that this is only an excuse for lack of nuance in the purveyors of news and opinion. 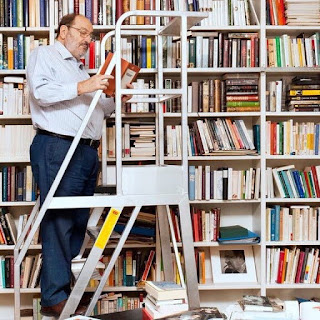 How do we learn then? I’ve been pottering around with my books for a couple of months now — I've discarded quite a few thinking that it was a waste if I were not to read them. If only I had discovered why Nassim Taleb explains Eco’s collection as an ‘antilibrary’:

“The writer Umberto Eco belongs to that small class of scholars who are encyclopedic, insightful, and nondull. He is the owner of a large personal library (containing thirty thousand books), and separates visitors into two categories: those who react with “Wow! Signore professore dottore Eco, what a library you have! How many of these books have you read?” and the others — a very small minority — who get the point that a private library is not an ego-boosting appendage but a research tool. Read books are far less valuable than unread ones. The library should contain as much of what you do not know as your financial means, mortgage rates, and the currently tight real-estate market allows you to put there. You will accumulate more knowledge and more books as you grow older, and the growing number of unread books on the shelves will look at you menacingly. Indeed, the more you know, the larger the rows of unread books. Let us call this collection of unread books an antilibrary.”

We all have books, and things, we need to return to. While Umberto Eco did want to turn the pages, perhaps as many as he could, he wasn't so keen on remembering a great deal about life: “The function of memory is not only to preserve, but also to throw away. If you remembered everything from your entire life, you would be sick.”
It is because we do not know what has been thrown away by memory that we don’t get sick. It is memory hiding from us our own memory that keeps us in fine fettle. If we knew, we’d be rummaging through the waste. I’m not sure whether it’s such a bad thing. The Umberto of my Delhi flight had probably been thrown away, but not entirely. For Umberto Eco resurrected him. In such renewal, both now live with a new dimension in my mind.
By Farzana Versey at 3:04:00 pm