Of Beyoncé, Trudeau and Culture Predators 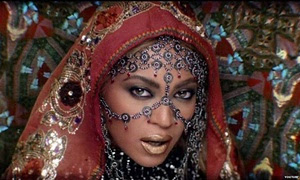 Around the time Beyoncé was being criticised for cultural appropriation of India with her portrayal of a Bollywood star in a music video, Justin Trudeau’s portrait on Pakistani truck art was getting approbation. Although the Canadian prime minister’s role in the ‘take-over’ was passive, few seemed to realise or even care that this was essentially a tribute to the good white man as samaritan.

No culture can live on an island, or off it. However, as we get exposed to outside influences, we tend to become proprietorial over what is ours, although we do not own it or even desire it. Those who believe in retaining the purity of a culture — which is not the same as the purity of a genre of music or art or cuisine — seem to propagate its superiority, and in some instances its ‘untouchability'.

In the reaction to Coldplay’s Hymn For the Weekend there is perhaps a belief that Beyoncé and Chris Martin should not be tarnished with the kitsch of Bollywood and loud Indian colours. Is that not how the West often views Asian smells and sounds in the green-card ghettos it nurtures to showcase its immigrant-friendly sanitised face?

There is also the aspect of white people calling out a woman of colour. Much of the censuring is over Beyoncé ‘trying to be Indian’ as opposed to Chris Martin ‘doing India’. That she is also portrayed as an angel to a white man could be a discomfiting factor too:

“Oh, Angel sent from up above
I feel it coursing through my blood
Life is a drink, your love's about
To make the stars come out”

Western appraisal very likely sees such deification as more dubious than the sponging on a loaned fantasy.

Justin Trudeau is a borrowed fantasy. His portrait on Pakistani truck art makes him into a true hero (yet again). Little is discussed about the art, and how clear it is that everyday art, as much as 'statement' art, is alive to politics. Truck art has been used to convey everything from local issues to cross-border peace.

Trudeau’s heroism has much to do with the perception of multiculturalism that he stands for. His “because it is 2015” liberal inclusiveness of women and immigrants in the cabinet, however, was also about profiling. It being “like Canada” was the bottomline. The diversity was held together in a clasp, as it were. Although there is nothing bad about it, he has been doing stereotypes as well. Of the three Sikhs in his cabinet, the defence minister is a guy who did the mandatory “taking on the Taliban”.

However, the celebrations made him into a benefactor, when it should have been about the talent pool he would benefit from. The messiah has a better shelf life, though. His welcoming of Syrian refugees, even if Canadian children singing a welcome song in Arabic happened a week before their arrival, is his passport to the Muslim heart. But it is their heart that he has captured. There is indebtedness in the art that takes a man on a roadshow miles away from where he is.

The acceptance of such art is because it is almost court painter-like. A pop band taking to the streets is naively seen as more rugged and infringing.

The damning of living stereotypes is elitist. Over-reacting to street scenes of celebration, of poor children expressing joy, of yogis and peacocks is denial of a culture too. Every single moment portrayed in the video is visible to Indians on any given day, depending on where we are. I’ve traveled through much of the country and I have preferred to look for a reconstructed mud hut or preening birds or caves and palaces, posing with locals, sometimes dressed like one, even though these are alien to me, rather than visiting factories and schools to figure out India’s progress.

If being Indian absolves me of appropriation, then it is not culture we are concerned about but borders and the fear that we will be colonised and our indigenous markets used for moneymaking schemes, much like what the East India Company did. (Coldplay being a British band does not help.) However, the protectors of culture do not use the same yardstick for big companies like McDonald’s when it goes local. The fact is that McDonald’s has a far more deleterious effect on societies that it has sneaked into than any pop version precisely because the latter’s projection of another culture is inauthentic and can be recognised as such.

We do not hear about Asian societies claiming the West. Urban Indian cinema often zooms into the streets of Manhattan and London, its characters’ angst drowning in the Thames or finding its feet in Brooklyn. That this is not considered cultural appropriation is a nativist position where the West is seen as beyond reach, therefore not vulnerable to hijacking.

Interestingly, by questioning the use of outmoded stereotypes by the ‘occupiers’, the critiques seem to suggest that skeletons are being appropriated. Given the revivalist spirit in some societies, including an India that wants to include Vedic education, such exhumation might then denote a renaissance of the culture.

Such sequestering of ideas and mores is almost rightwing where, for example, immigrants are given guidebooks on how they should behave in the host country.

When Madonna sings Sanskrit shlokas, or a Hollywood star gets a tattoo in Hindi or a model wears a dress with Arabic calligraphy, there are two kinds of reaction. Either they are seen as a nod to these cultures or an insult to them.

Coldplay’s video is most certainly not a Slumdog Millionaire clone. At no point does Chris Martin flash a dollar bill. And he does not watch the Beyoncé film in a run-down movie hall with foreigners like him. The audience is Indian, and he is very clearly the outsider gawping at a removed-from-mere-mortals star.


If the video is in bad taste for showing India’s poverty, then this is what we market. From NGO brochures to fashion designers ‘wanting to help artisans’, we display poverty mannequins. The bestsellers on the ‘real India’ are written by those who do time in India or Indian expats who get nostalgic about what they had shut their eyes to when they were here.  Some years ago, a five-star hotel in Chennai had introduced “authentic Nair tea” for “those who are rich and famous and can't be seen sipping tea from a glass tumbler at a roadside stall”.

In one shot of the Coldplay video, there are fleeting glimpses of the Indian actor Sonam Kapoor. Why did they not use her in place of Beyoncé, has been one reasoning. This is not the first time that liberal discourse has pushed people into pigeonholes. Coldplay using an Indian for a western fantasy could be equally exploitative. The point is: Should art be so confined?

When Mary Kom, a film based on the life of a boxer from the North East, was released there was some opposition to Priyanka Chopra, a Bollywood star, portraying her. The contention was that someone from the region would have been more appropriate because by using prosthetics to slant her eyes, Chopra was shaming the region. It is rather obvious that this argument is stuck on eyes and the superficial. It discounts the fact that the boxer herself enjoys her occasional outings as a diva. The response to this would be that she has been co-opted, which exposes the arrogance of intellectual rabidity that seeks to claim property rights over what it claims to protect.

There was a similar response when there was a film based in Kashmir. Haider was an adaptation of Hamlet with the Valley as the backdrop. None of the major characters was played by a Kashmiri. The fact is that not many of them are actors or a part of Bollywood. And why should the accusation of ‘using’ the state stick only to the creative person and not to the avaricious public intellectuals?

Besides, reducing authenticity to geography sentences it; it is not free to evolve. We would not have had Star Trek or all those alien movies where humans appropriate outer space if all we wanted to know was the genesis of something. Genesis? What’s that?