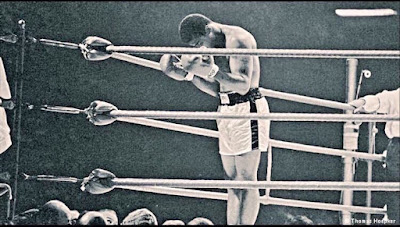 There is a photograph of him offering prayers in the ring. This one image conveys clearly that you cannot remove the sportsman from his larger role as a political Muslim.

As an interested observer with no knowledge of or interest in boxing, Muhammad Ali became an advertisement for Islam. He came to represent certain qualities of pragmatism, focus and humanity and brotherhood that might qualify him, for today’s stereotyping, as a ‘good Muslim’.

He, like everybody else, was not perfect – as a man, as a friend, as a Muslim and even as a Black. But his stance on many issues had sound ethical ring. When he refused to be drafted for the Vietnam War, he explained his reason thus:

“My conscience won’t let me go shoot my brother, or some darker people, or some poor hungry people in the mud for big powerful America,” he said at the time. “And shoot them for what? They never called me nigger, they never lynched me, they didn’t put no dogs on me, they didn’t rob me of my nationality, rape and kill my mother and father. … Shoot them for what? How can I shoot them poor people? Just take me to jail.”

He was arrested, stripped of his title and his license was revoked. He came to be hated. “Is this what he does to America, an America that made him?” they asked.

If a nation can make a man, why can a religion not? I ask this because an attempt is being made to erase his race, his faith, and thereby all that he stood for. As Donald Trump had done: “Obama said in his speech that Muslims are our sports heroes. What sport is he talking about, and who?”

It is not merely the rightwing doing so. It comes camouflaged as showing him as being “beyond” all these. The fact is that he chose these identities.

The persistence to call him by his birth name is as much a political act as a religious one. Why would the Hindutva people insist on calling him Cassius Clay, even though he had stated, "Cassius Clay is a slave name. I didn't choose it, and didn't want it. I'm Muhammad Ali, a free man..."

Few understand what freedom means to others.

I had a few exchanges with some from the Indian rightwing. It started with this quote I posted:

"The word 'Islam' means 'peace.' The word 'Muslim' means 'one who surrenders to God.' But the press makes us seem like haters."

This statement is more political than religious. It is also sad that after leaving a life of slavery, even Muhammad Ali had to deal with Islamophobia. Ali was alluding to the chasm between what his belief meant and how it was perceived by those supposedly with open minds. He was no blind believer. He categorically condemned recent terrorist attacks:

“I am a Muslim and there is nothing Islamic about killing innocent people in Paris, San Bernardino, or anywhere else in the world. True Muslims know that the ruthless violence of so called Islamic Jihadists goes against the very tenets of our religion.”

The rejoinder to the quote was this:

“Well, Ali (CC) lived and grew up in different times – had he been born now, he wouldn't have said this again!”

The fact is he became even more aware of this aspect of his identity due to the increasing profiling of his faith. As after 9/11 for which he said: "The real Islam comes from Mecca. All people are God’s people. The devil can be any color." Following Donald Trump’s brag about not allowing Muslims into America, Ali had stated that Muslims have to stand up to anti-Islamic speech.

His response was decades after his conversion when he had already owned the religion.

But why should the Hindu right be in denial about the faith of somebody so far away? There were attempts to suggest that he turned to Islam only because he wanted to escape being drafted or to protest against Whites.  (Do they even get the irony here when they insist on ghar wapsi of Muslims, to get them back into the fold of Hinduism, that perhaps they had issues with the religion?) There was also a desperation to point out that he was already a world champion before he chose to convert, and Islam had nothing to do with it.

This is amusing, for it exposes their hollowness. Here is a man who answered to the name “The Greatest”, who was a champion, who could have whatever he wanted, and he chose Islam. 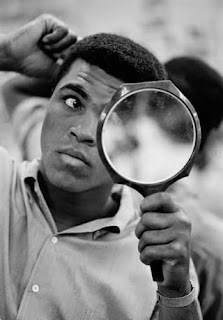 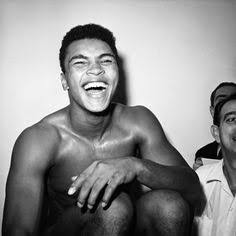 I read somewhere that while Cassius Clay was a nice, charming bloke of a boxer, Muhammad Ali was a perennially angry man whose boxing too had become hardened. But, then, experts of the sport say that his so-called dancing days in the ring were more flash less fight.

The first comment is fascinating. I know it was by a white man, but forgot to save the article. How can a person transform with a change in name? Why do people forget that Ali used the name Cassius X, after Malcolm X, in his early Muslim days? As I said before, he was no blind believer. He even experimented with mentors, moving from Malcolm X to Elijah Muhammad.

Those who believe that Islam should not get any credit for his greatness are resistant to the idea of using this logic when they talk about terrorism and jihad. Will they cease blaming the religion for these as well?

Nobody would suggest that Muhammad Ali learned boxing from Islam or even how to be a winner. But it is possible that, having found spiritual equanimity due to his raging anger against the world outside and its attitude towards him and his people, he felt assured and at peace with his identities.

A couple of videos doing the rounds. The first one begins well but drifts into evangelism; the second is funny. He was not just a boxer. You've got to check out his oeuvre to be able to see that.