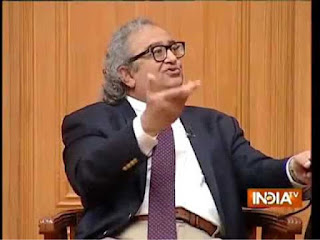 Among the many absurdities that constitute iconoclasm is the hero worship of a Pakistani by the Sanghis, an extremely narrow-visioned, ill-mannered segment of the Indian rightwing.

Although they get their name from the Rashtriya Swayamsevak Sangh (RSS), they lack the organisation's discipline and abstinence, real or merely touted. They are, in fact, totally out of control.

But this is not about them. It is about their new hero — Pakistan-born Tarek Fatah, who was educated in Karachi, worked there as well as in Saudi Arabia, and now lives, writes, hosts a TV show in Toronto, Canada.

He has been widely seen as a Muslim-bashing atheist in the past. He spoke out against anything Pakistan, which made him appear like a liberal to Indians. He spoke against Islamic countries, which suited the Islamophobes.

The Sanghis accepting him is, therefore, understandable.

But why would he, a well-read, fairly erudite person, play to a gallery made up of those abhorrent to the worldview his lapses into rationality seem to fight against — religiosity, conservative mindset, and mixing of religion and politics?

This is where we need to pause and take a deep breath. I watch him as he responds gleefully to his social media followers and then I watch him on Aap ki Adaalat, a mock courtroom show. Then I read what Congress party leader Manish Tiwari said about him being a "deep Pak" man.

It is probably a conspiracy theory, but hypothetically this could bell the cat. After all, he was an adult when he went off to Saudi Arabia, his pet hate. Why did he choose this Arab kingdom and not any other country if it is so ideologically at odds with his own?

Right now, it would be safer to state that while his relationship with his fans among the Indian right wing is mutually beneficial, it would be more appropriate to say that he is making them dance to his tune. As he spoke on the show, running down Pakistani leaders, Arabs, Indian Muslims, they cheered lustily. These young people were a fine study in bigotry. All were from Delhi, the nation's capital. This is the future of India. It is easy to dismiss it off as a mere studio audience, but think of the other studios where this is replicated.

Even worse is that they did not seem to have a clue that they were being held hostage. In fact, it is amusing to watch many right wing intellectuals (those who at least have the capability to analyse) laud him for what they might have dismissed in others as a nautanki performance.

So, forget what the others – Muslims, leftists, liberals of various kinds – have to say about him. Do the serious rightwingers lack self-esteem that they are willing to be indebted to a foreigner? In the Raj days, the RSS was obsessed with the British. Today's Sanghis might find getting approval from the west a bit tough, so they are willing to bite a Pakistani bait.

How does he manage to get them to do so? By completely denying that he is Pakistani and asserting that he is Hindustani. It is no mean feat for a Muslim Pakistani to appeal to the Hindutva brigade. His young fans plead with him for a reply, they call him a cute teddy bear (among them are young women who might have suffered at the hands of Bajrang Dal had they as much as celebrated Valentine's Day with a male friend). They often come across as blabbering fools begging for munificence and he obliges as paternal pontiff.

The man who needles and provokes from a Twitter handle and TV studios, who does not even want to be with Muslims, is hailed as the best Muslim by them.

He is a smart man and is willing to update his own positions. There has been a tactical shift. He is marketing his Muslim identity in a most passive-aggressive manner. He quotes himself incessantly, posting news and trivia about Muslim demonic acts. These days his stand is like that of a reformer on a mission to clean up his religion.

He picks up random "my kind of Muslim" examples to ensure he remains relevant to his Muslim roots. This is very important because Indian Muslims are a large group, they cannot be done away with overnight. He professes to help the jaahils see the light.

The most eye-popping of his declarations was that Prophet Mohammad was against cow slaughter. “Why do Indian Muslims insist on eating cow meat then?” was his provocative query. That beef is consumed by other Indians, including Hindus, did not bother him; that he did not have a thing to say about cow meat in other countries by Muslims reveals clearly that he was riding on the Indian cow vigilantism. Amazingly, he does not care to shame those who go on a rampage and kill suspected beef eaters and even cattle traders.

Had his agenda not been so laughable, it might have been laudable. He will tell us about a mullah caught with his pants down, but not about the charlatans and their history of abuse in ashrams. He does not ridicule Hindus like Swami Adityanath.

For the past few months he has become a regular on Indian TV. What exactly does he represent — Pakistan, India, Balochistan, Muslims, Islam? It is quite interesting that he happily accepts all the identities (he has to accept the Pakistani one for authenticity) even though he is none of them. This strategy is working out well.

People like Tarek Fatah hate Indian Muslims comfortable with their roots and the tree unlike rootless expat Pakistanis who realise they won't get a toehold back home. He has seen that the Sanghi is most threatened by the idea of the Indian Muslim and plays on that. He challenges Muslims in the subcontinent to critique Arabs, but will not question Hindutva. He thinks he is liberal because he takes on his own, but if an Indian Muslim questions the government, he thinks we are traitors, or even Pakistani under the skin. The idiotic Sanghis buy that from a Pakistani. Why?

He really does not have the global reach they imagine, so he can't take their message far. If one were to use monetary analogy, then they are sponsoring him for selling their story to them. No guesses for who laughs all the way to the bank.

The media is not so stupid, though. For them this is a wonderful opportunity to do their second-rate journalism and feed on rightwing populism by adding to the "snakes within" phobia. He fits the blueprint or plays it. He pontificates on how radical IMs should behave. You will be able to better imagine the extent of the damage when you consider that these channels would never invite an atheist Nepali Hindu to discuss Indian Hindus because of, say, Bajrang Dal types.

Appalling to think that a Tarek Fatah can imagine he'd get Indian citizenship on the basis of spewing hate against Muslims – and that his fans seem to believe that is qualification enough.