Rahul Gandhi, Sikhs and the Politics of Apologia

In his speech in London recently, Rahul Gandhi said that the perpetrators of the massacre of 1984 following the assassination of Indira Gandhi should be punished and he would support that “100 percent”, but he will not blame the Congress party. The opposition wants him to apologise for this comment.

Just suppose he does apologise to the Sikh community, would justice be done? Thirty four years later, why are they then waiting for a fair trial, why is the hurt still so raw?

In a span of three days 2,733 Sikhs were killed in Delhi alone while the government did nothing. What followed was not only genocide, but complete misuse of power. Punjab was sealed off; 150,000 troops made their way in; on June 4, Indira Gandhi gave orders to the army to attack the Golden Temple and 40 other gurdwaras in Punjab.

With Operation Bluestar, Sant Jarnail Singh Bhindranwale became the Osama to Indira’s Bush. She and son Sanjay had used him, propping him up as a leader, when he was a non-entity. Just days before the attack, Rajiv Gandhi reportedly referred to him as a “saintly religious preacher”. In fact, a formal declaration of “independent Khalistan” came only in April 1986.

It has been typical of governments to target innocents when they fail to deal with a group's demands or aspirations. It was no different in the case of Sikhs. And even if the then prime minister was killed because of disaffection, it had nothing to do with the community, and most certainly not the way for a ruling party to use the system to decimate citizens.

It was an organised carnage because the next day itself the mobs had voters’ lists and were targeting Sikh homes with rods, knives and petrol cans. The state machinery was at the disposal of the government. These institutions adhered to what the government expected of them. The police looked the other way and in many instances assisted the mobs, even providing diesel from their official jeeps to set fire to homes and people. The state-owned media carried only one point of view, including slogans.

Despite the murder of over 3000 people across 80 towns, the arson and looting, Human Rights Watch reported that “the Delhi police eventually filed only 587 First Information Reports (FIRs), official complaints…Out of these, the police closed 241 cases without investigation, claiming inability to trace evidence”.

Is Rahul Gandhi, therefore, right in stating that the Congress was not involved when civil rights organisations had clearly provided names of 16 leaders from the party and 13 policemen?

Congress leaders say he cannot be held responsible for what happened because he was only 14 then. There are children and teenagers from that time who watched their fathers and brothers being hacked to death, their mothers and sisters getting raped, their homes torched, their shops looted. They live in the camps set up for the widows of 1984. Many still carry the scars; they have turned to drugs, are jobless and have turned to petty crime.

Others had altered their identity. Like Harbans Singh who I had met many years ago in Delhi. He had discarded the turban. His views, though, echoed his roots: “Maneka was shunted out of the house all because she is a Sardarni”, Indira had an “evil, parochial mind”, Sanjay was “a goonda”, Rajiv’s sins were his weakness and insensitivity in making that now infamous remark after the massacre, “When a great tree falls, the ground shakes”.

He held no grudge against Congress loyalists like Buta Singh who atoned for his sins by doing seva cleaning the shoes of devotees at the gurdwara. “You have to be true to the Khalsa.”

By being faithful to his faith, he was trying to cope with his anger, his losses.

Rahul Gandhi is trying too. Revealing a mind capable of grasping nuance, a few days ago in Hamburg he said that he did not feel jubilant over the death of V.Prabhakaran, chief of LTTE that was behind his father’s assassination: “He might have been a bad or an evil person, but the violence that was done against him was impacting others, like it had impacted me. If you go deep, you will find there is something that triggered that violence. It’s not just a random event. Some action or violence done against him or her has triggered it.”

The Nehru-Gandhi family has chosen the high ground when confronted with the killers of Rajiv Gandhi to the extent that Sonia Gandhi had written to President K.R.Narayanan to commute the death sentence of the four convicted. Priyanka Gandhi even met Murugan’s wife and later observed, “meeting with Nalini was my way of coming to peace with the violence and loss that I have experienced”.

They do not have that luxury of a higher ground in the case of the assassination of Indira Gandhi because of the aftermath.

Demanding an apology from him is merely pandering to the gallery of tokenism. Sonia Gandhi has apologised; Dr. Manmohan Singh did, and he too exonerated the party. In a sense, it is probably right. We do not expect some terrorists to tarnish the name of a community, it is therefore perhaps a broad stroke to accuse the entire party of being complicit.

Last year at the University of California, Rahul Gandhi had said, “I absolutely love the (Sikh) community. If there’s anything I can do to help them get justice. I’ll be the first person to do so.” The premise is flawed. You do not have to love a community to ensure they get justice; it is your duty, especially when you are in a position to do so. There were protestors outside the venue; he did not speak to them. Just as Rajiv Gandhi completely ignored to address the brutal killings when he came to power on a ‘sympathy wave’. The children and widows of the dead had no such hope for redemption and renewal.

Yet, India routinely elects leaders to the top post following their sins of omission or commission. There are second and third layer explainers to varnish their acts. K.P.S. Gill, who was security advisor to Narendra Modi in 2002 had covered up for his leader: “In law and order situations, it is the police leadership which has to respond and not the political leadership.”

In later years, as Director General of Police, Gill took charge of dealing with terrorism in Punjab. With the state under president’s rule, he had excessive power. Encounter killings became the order of the day for which promotions were promised. An activist exposed 6000 hidden cremations by the police in one district alone. Gill, celebrated by the media and socialites, was viewed by Sikhs as the “butcher of Punjab”. 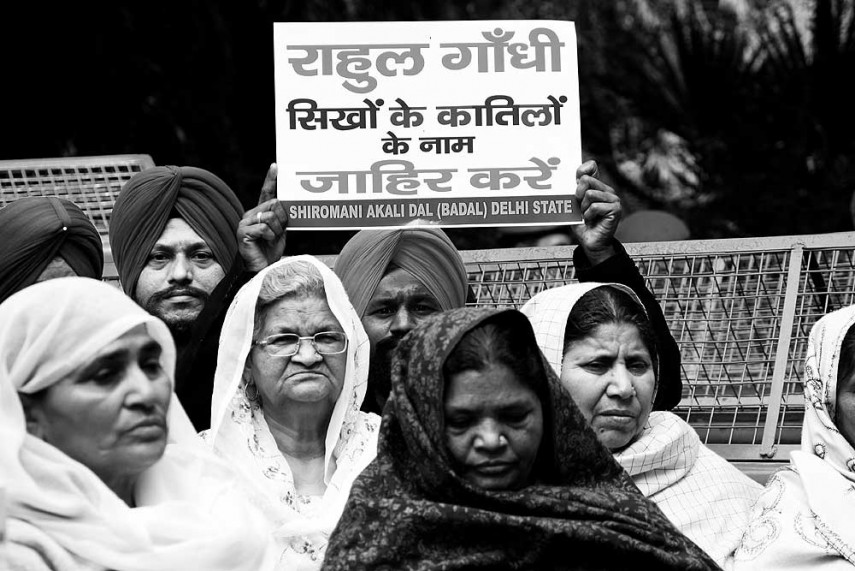 It would be ridiculous to believe that the alienation of Sikhs was due to the acts of some militants; it has to do with wounds, first of the Partition and then of being persecuted by the ruling elite. They are not even perceived as a significant vote bank. Which is the reason why the likes of Sajjan Kumar and Jagdish Tytler could continue to contest elections as Congressmen. The latter, in fact, was even honoured with a 'siropa' by Delhi Sikh Gurdwara Management Committee in 2004, 20 years after his role in the pogrom. No group is above political expediency.

There were quite a few of such expedient voices from the tony boys’ club that thought vengeance was their birthright. They may not have held the baton but they did incite mobs. And they did it for the party. They should have had no place in the Congress, let alone being allowed to contest elections. Rahul Gandhi fancies himself as an idealist and he was not 14 anymore when they were given tickets. He was, in fact, 47 and the president of his party when he anointed Kamal Nath, another accused in the 1984 killings, early this year as party president in Madhya Pradesh before the assembly elections. Does this look like the justice he talks about?

Justice is not mere words to quell the anger of a community. Even if it helps bring some sort of temporary closure, closure must not wipe out history.