Clinton Plays Snake and the Rope 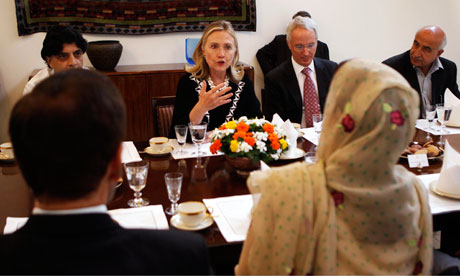 While most of the media is patting Hillary Clinton for the “tough talk” with Pakistan in Islamabad, what the US Secretary of State has really done is to send out contradictory signals. Take these two quotes:


What tough talk? The US has its ways, so where is the mutual suspicion? This is the façade. It is ridiculous, as has been implied by one set of analyses, that things got a bit difficult between the two countries because of Osama bin Laden. What of him? That he was found in Pakistan? Or, that the Americans killed him? Or, that the Pakistanis helped the Americans?

The only problem with the ‘end of Osama’ deal is that the US administration is suffering from an itch. It has to fight terror, but it has nothing to show. After camping in Waziristan and Kabul – not to speak of hovering over the Middle East – it has figured out that the Haqqanis are in charge of the terror network in this part of the world.

The supposed Clinton missive is about asking Pakistan to do all sorts of things to the Haqqani faction that sounds like a bad mixer-juicer-grinder ad: "to encourage, to push, to squeeze…That is what we are looking for." All this is apparently for a peace chat. She reportedly added for good measure, revealing an appalling lack of understanding, that it was not clear whether the militants were ready for talks.

Damn them. Really. Pakistan’s military chief, Gen. Kayani, had in fact made the ‘tough call’ by saying “we are not Iraq or Afghanistan”, although everyone knows that it would take a minute to become one. The US can do that if it has a ruse. Pakistan has managed to resist obvious puppetry due to its Saudi connection.

Since Clinton has already said that the US worked with the Pakistani army, why is she ranting? Because that is her job profile. Her quick visits are part of the banshee cry that needs to resound.

If anything, this was a PR exercise.

"Every intelligence agency has contact with unsavory characters, that is part of the job of being in an intelligence agency. What we are saying is let's use those contacts to try to bring these people to the table to see whether or not they are going to be cooperative." She noted that it was the Pakistani intelligence services that requested the U.S. meet with the Haqqanis.

Where is the problem here? Why make noises about the ISI then? If the US and Pakistan are in this together, then every single meeting is a wasted effort. They are merely sending out signals to no one in particular. Since every intelligence agency has contacts with unsavoury characters, why does the US always need help? Is its own intelligence falling short or do they avoid unsavoury characters due to some moral reasons?

The most delectable comment was from The Guardian quoting Pakistani officials responding to criticism about intelligence links with the Haqqanis as saying:

As for Ms. Clinton’s “you cannot keep snakes in your backyard and expect they will only bite the neighbours'', why has it just become a much-touted quote?

Which neighbours was she referring to? Is she okay with such neighbouring? This is such a typically selfish attitude. And, anyway, the United States of America does know about snakes in Pakistan’s neighbourhood. Its CIA helped create one. When he bit it, they decided that anything that looked like a reptile was a threat and had to be done away with. What no one realised as that the American administration was the chameleon dangling a rope and screaming, “Snake!” A win-win situation.

The noose and the venom, real and delusionary, are powerful weapons of destruction.
By Farzana Versey at 8:00:00 pm