A rape apologist is somebody who condones rape, not one who reports on its verdict. The Steubenville trial has concentrated on making a devil of a reporter by comparing what she said with the terrible online comments. How concerned about rape are those who merely ‘followed’ the herd to outrage about the news?  All those who downloaded or watched the YouTube clips are as much rape apologists as Poppy Harlow.

The CNN site and others have got many hits. Yet, who has bothered to even mention that she called it a “serious crime”?  That is just so tame and obvious, isn’t it? So, this quote from her has made it:

"Incredibly difficult, even for an outsider like me, to watch what happened as these two young men that had such promising futures, star football players, very good students, literally watched as they believed their lives fell apart." 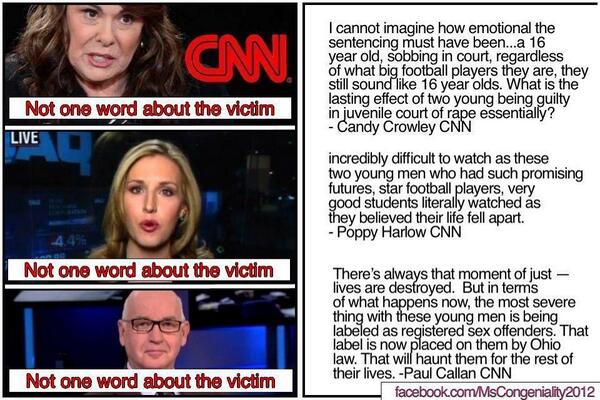 The screenshot reproduced by Mashable has the incessant query, “Not one word about the victim.” What do they want to know about the victim that has not been already reported? Is this a spectator sport? Trent Mays and Ma'Lik Richmond were sentenced for raping a 16-year-old by a juvenile court. Why are rapists punished? Because society needs to understand that they are committing a crime against women, against another human being.

The idea is to make an example of them, and what better way than to mention that they were star football players and good students who had indeed lost it all for behaving in such an atrocious manner. Is this not the message that has to be sent across to other young men that, whoever you are, if you commit a crime, then this is what you get?

One recalls other crimes, including mass murder and terrorism, where the convicts has been deemed insane. This results in covert sympathy, which is far worse.

You might ask: why was it difficult for a reporter or the news anchor to discuss emotions? Check out the comments. Anger is also an emotion. Pity is an emotion. Had the judge let them off, most people would have reacted emotionally. It was difficult to sit in the courtroom probably because both of the convicted got up and apologised to the family of the victim; one broke down. It is not about sympathy for their crime, but for their response to being punished. I would judge Harlow harshly had the verdict been innocent and she had said that this was an incredibly emotional moment watching as these two footballs stars and good students could return to a new life that awaited them. This was not the case.

(Candy) Crowley turned to legal expert Paul Callan who sounded almost apologetic when explaining how the rape conviction will mean that the Steubenville rapists will now be registered sex offenders and how that "will haunt them for the rest of their lives." None of these things said were untrue. But the tone was certainly a little off.

How does anyone decode that the tone was off? As I said, the report was about the trial, not on the rape. The emphasis ought to be on the rapists who will be tainted for the rest of their lives. This is as it should be, for the usual narrative is that it is the victim who is so tainted and who has to live with this all her life.  If, for the sake of argument, the tone sounded apologetic, it does not reverse the judgment. It brings to the fore that whatever anyone might feel those two young men will have to live with it, their futures have been mucked up. Justice has been done.

Ohio attorney general Mike DeWine said after the verdict, "As I said already, any rape is a tragedy. But, it is even more of a tragedy when that victim is continually re-victimized in the social media."

This is what people should understand, instead of a typical knee-jerk reaction.

But, then, it is becoming increasingly impossible to do so.  Online abuses by anonymous blokes are being spread around by women, giving even more ammo to them.  How many of those reading these get sensitised? It just becomes part of the sickening term ‘rape culture’ that even well-known commentators use with impunity.

One report while rubbishing CNN – that I do not admire, anyway – talked about how the circus has just begun. Well, the moral high-standing falls flat on its face when you decide to ignore the crime and only watch the ensuing performance. How many referred to the victim while pulling up those who they think are rape apologists? Online warriors are primarily online voyeurs. This is being an apologist, too.

There is also a clear hierarchy regarding who to feel sympathy for. A few days ago in Mumbai, four men sodomised a eunuch, stubbed him with cigarettes, poured kerosene on him and threw him out of the moving car in which they committed the crime. Has there been any reaction to it except for a newspaper report? For all those who participate in the Gay Pride parade and offer lip sympathy to the LGBT community, this still remains an area of darkness. One of the reasons is that liberalism is all about accepting, but not questioning crimes towards the community as well as within it.