Patriotism and the Sahara Parivar 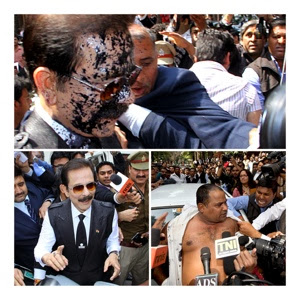 A big business magnate gets jail time, aggrieved investors shout slogans against him, someone throws ink as he leaves the court. The Indian middle class, quick to find conscience keepers in any nook and cranny, will pat itself for justice delayed but not denied. They will applaud Indian democracy.

The default beneficiaries will be political parties. Look, they are likely to preen, we put the big man in Tihar Jail, he will have to sleep on the floor, eat prison food.

Subrata Roy has essentially done what big businesses in India do: withheld information and cheated investors. A report states:

The Securities and Exchange Board of India (SEBI) says Sahara failed to comply with a 2012 court order to repay billions of dollars to investors. Sahara says it repaid most investors and that its remaining liability was less than the 5,120 crore rupees it deposited with SEBI.

Roy had evaded arrested, and when he was caught the cops took him to a forest guesthouse where he held court. This Tihar Jail stay until March 11, close to the general elections, will be a great showpiece for the idea of the 'power of politics'. Assisting it are the investors who shouted, "He is a thief, he has usurped people's hard-earned money", and then appeared Manoj Sharma, a Madhya Pradesh lawyer, who chucked black ink on Roy's face within the premises of the Supreme Court, an illegal and nicely acceptable anarchic act. He even managed to show his torso, and the inked words in Hindi scrawled on it: "Azaad Hindustani", the free Indian.

This was a moment.

Roy is also a huge celebrity magnet, partly because unlike many other industrialists he does not have lineage. He patronised and was patronised by the governments in power, Bollywood actors, cricketers. The nouveau riche.

Some of them even had a press conference a few days ago to support him, but had to stop mid-way. Former cricketer Kapil Dev in a letter to the media, which he said he was sharing "in the best interest of the people of the country", no less, wrote:

I came to know though TV channels that Saharasri has surrendered and is in police custody. I have known him as an extremely patriotic man who has done so much for the country. I wish that he comes out of this situation soon."

Patriotism is the key that opens many doors. Roy had mastered this art, and in some ways by calling his organisation a 'Parivar', family, he truly played into the emotions of the Indian psyche. 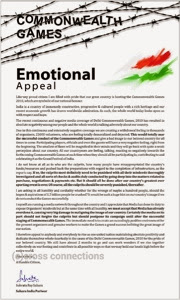 Our memories are short, though. At the height of the CWG scandal, he had issued huge advertisements in the newspapers titled ‘Commonwealth Games Emotional Appeal’. It was signed by ‘A Humble Citizen’. Himself. He used words like "pride", “respect and hope” and “our recent economic growth”.

This is the fantasy of the millionaires. The economic growth has not reached most citizens. In fact, humble people who are not sponsored by big men's logos.. Is this our “rich heritage”?

“Due to this continuous and extensively negative coverage, we are creating a withdrawal feeling in thousands of organizers, 23000 volunteers, who are feeling totally demoralized and dejected. This would totally mar the successful conduct of the Commonwealth Games and give a bad image to our beloved country for all times to come.”

Clearly, here it was about self-image and well-being. Roy had a stake in IPL and iwas eyeing Liverpool. It is such grandiose efforts that make us believe we are global citizens by marketing our heritage, which has been taken over by those far removed from it.

It is rather shocking how Roy came forth on CWG and felt “the culprits most definitely need to be punished with all their misdeeds thoroughly investigated and all sorts of checks and audits duly conducted by going deep into the matters related to purchase, negotiations & payments etc. But if should all be done after our country's greatest ever sporting event is over. Of course, all the culprits should be severely punished, thereafter”.

This is a classic way of pushing the dirt under the carpet. These culprits will be the visible face of India.

It is no surprise that a businessman would think narrowly. Some of his supporters have shown concern for members of his Parivar and their wellbeing. Subrata Roy, even when down, remains in the Indian public imagination a benevolent patriarch, the head of the extended Indian family. By default, it is India. India Incorporated running India is not just about money gained and lost. It is about the gullibility and guile of the upwardly mobile middle class, the vote bank that dares not take its name.

It can be the victory even in downfall of many a corporate house of cards.