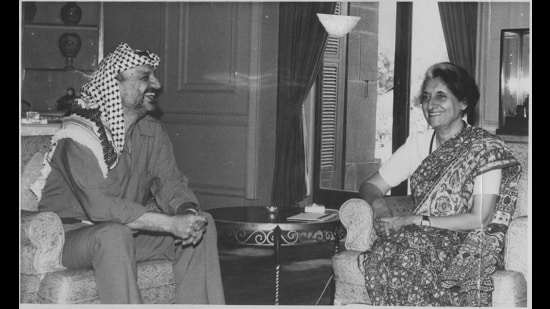 “I want a picture with Yasser Arafat,” I said. The American raised his eyebrows as I clicked him gushing over the waxwork of Aishwariya Rai at Madame Tussaud’s. “Why him?” he asked. Arafat, the Robin Hood figure who had managed to get respectability for an organisation created for guerrilla warfare was, for me, the closest thing to Che.
It was in Mumbai over bitter tea with students in hostel canteens and idlis at Laxmi Hotel, a crummy little eatery in a bylane of Colaba, with a member of the Palestine Liberation Organisation (PLO) that I began to understand the Israel-Palestine conflict three decades ago. Although PLO was seen as a terrorist organisation by many at the time, over a hundred countries had recognised it and more than 90 maintained its diplomatic missions and information offices, including India. That India was captured in photograph's of Arafat's easy camaraderie with Indira Gandhi.
Today’s India will ask you, “Why do Indian Muslims get so worked up about Israel?” even as Palestinian homes are bombarded, and many are fleeing once again.
***
Read more in  Hindustan Times
By Farzana Versey at 11:38:00 am