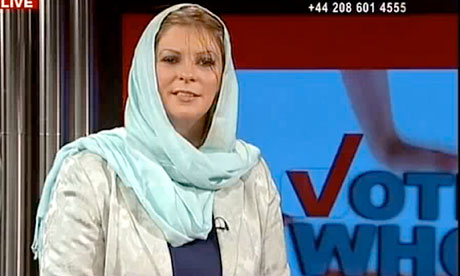 There is something about Tony Blair and his extended family that has an obsession with religion and these sudden flashes of light. His wife Cherie chose to wear crystals and do reiki to get her energy all up. Tony became a Catholic and maybe that inspired him to write a version of the Confession in his memoirs. Now his sister-in-law, Lauren Booth, has converted to Islam because of some “holy experience” in Iran.


"It was a Tuesday evening and I sat down and felt this shot of spiritual morphine, just absolute bliss and joy.”

Oh dear. She should tell this to the ayatollahs instead of giving interviews about it. They’d kick her peaches and cream English ass for such blasphemy. I know many people see religion as some sort of ‘kick’ and being lost in a sublime experience, but what about the rituals? Our Lauren has no problems. Her morphine shot has given her a headache fit enough for her to follow the regimen. As a report states:


(She) now wears a hijab whenever she leaves her home, prays five times a day and visits her local mosque whenever she can.

Funny. Which mosques do women visit? Does the media not have any knowledge? I assume she leaves home often, so what’s the need to state that she covers her head whenever she steps out?

I don’t know about Lauren’s motives, but her timing is perfect. She is now dissing Tony for his book, saying that he is not a human being. I suppose she would have to study her new religion and figure out how not to address male members of the family in this manner and what qualifies as a human.


Before her spiritual awakening in Iran, she had been "sympathetic" to Islam and has spent considerable time working in Palestine, she said, adding that she hoped her conversion would help Blair change his presumptions about Islam.

Pother! Keep your sympathy to yourself. There are several Christians in Palestine and the media is unnecessarily clubbing her being “stuck in the Gaza strip” along with this news. Besides, you do not have to be a Muslim to change people’s perceptions. You just need to keep your eyes open. It is time for her to shut up and go beyond page 60 of the Quran she is currently at. Why are these minutiae of such importance? She could just as well read War and Peace for all we care.
By Farzana Versey at 9:36:00 pm