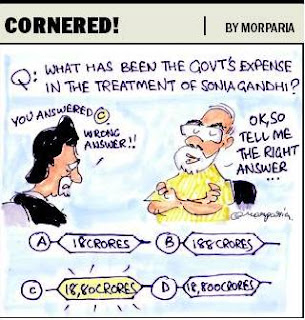 Narendra Modi is doing what he is programmed to do as a politician: rake up issues to show the opposition in a bad light. His latest salvo that turned out to be a whimper is to make public the travel and treatment expenses on Congress chief Sonia Gandhi.

The media has made it into a Modi versus Sonia war. The timing is obviously to cause some embarrassment, for Ms. Gandhi launched her party’s campaign in Gujarat today.

The problem is that there is no embarrassment in politics – kickbacks and killings are par for the course. There is only one-upmanship.

"The Congress has laid down the foundation for growth in Gujarat. The Congress has tried to live up to its ideals, we have come a long way and still have miles to go. It is unfortunate that our opponents only see darkness and cannot see the development. The work the Congress has done for the development of Gujarat, no one else has done. The opposition always misleads people about our development-oriented policies. It is the habit of some people to take credit for the work done by other people, let them do it.”


This indirectly conveys that there is major development. People are not interested in who laid the foundation stone, how much money the Centre is pumping in. They see the glitz and the man with the Midas touch, even if it is fiction.

And then she went straight into the lion’s den without even realising it:

"The whole country is concerned about corruption today. We are too. The UPA brought in the Right to Information Act. People against whom there were corruption charges; the law has taken its course. I want to know what the BJP is doing about corruption. Why is there such a difference between their walk and talk?"


It is an RTI report that Modi has been flashing in public. The BJP may not walk their talk, but what happens to their allegations?

Indeed, Modi should realise that when he wants to target someone powerful outside his state he should come armed with facts that will not fall flat on their face. The bizarre figure spent he said was Rs. 1880 crore.

"If Modi is referring to my RTI, neither have I received any such information nor have I leaked it to the media or any politician.”


Then, where did it materialise from?  The Congress has gone on the offensive on this slippery ground using invective to counter invective. If Modi is a liar, then nail his lie.


He is a shrewd player. It is quite probable that he used hyperbole precisely to get such a reaction. The Kapil Sibals, Manish Tewaris, Rajiv Shuklas are frothing at the mouth, and he is watching the fun. In fact, he has come forward with empathy:

"I say the government should spend as much amount as is required for treatment of Sonia Gandhi. We are for humanitarian cause. I would like to tell the PM to spend as much amount of money as needed but if people want to know the details of the expenses, should not the government give the details? Is it not the right of the people to know how much of their money is being spent? I am not questioning Sonia Gandhi. I am asking the PM how much money from the exchequer has been spent on Sonia Gandhi.”


There are some people who want to know: why now? Why did he or his party not raise the issue earlier? In fact, one is amazed at the media’s silence and ‘respect for privacy’ where Ms. Gandhi’s illness and trips abroad are concerned. Let us not forget that other politicians are made into public spectacles for their ailments, whichever party they belong to.

Modi may be using this time opportunistically, but is the query not valid? Why the secrecy about expenditure and trips made? I don’t think anyone should press for details of her illness, if this is a specific request. (In which case, the media should leave others alone, too.)

There is a suggestion that he won the 2007 elections by abusing Sonia Gandhi and is hoping it will work again. Much as I dislike his politics, Gujarat is in his pocket. The earlier abuse is replaced with a mix of concern for the nation’s wealth, at a time when the prime minister has just come out with his plan for the economy.

Sonia Gandhi’s speech has not helped. The Congress party spokespersons’ casual attitude could well be counter-productive outside Gujarat too when people have to shell out more for household items. If only they came out with a clear indicator, they’d earn goodwill and be seen as a serious political force, and not just a party of quiet hangers-on.

A few days ago, I got this email from a saffron party person:

"The latest India Today reports that Rahul Gandhi visited Singapore for three days to watch the Formula One race.  Since the race duration itself is about half-a-day, one has to wonder what exactly he did for the rest of the time.  Also, one has to wonder how the trip was paid for, since his wealth declaration, required at the time of filing the nomination to stand for Lok Sabha elections, indicates that he is a person of modest means."


Should these queries not be posed? Are they irrelevant to what else he does? In this case, it is possible that the F1 people invited him and sponsored his stay. It begs the question: Should a leader of a national party accept such freebies, if that is the case? Then, was not Narendra Modi invited by Gujarati businessmen in America? Expats have kept the Hindutva movement well-oiled. Almost all politicians make trips abroad; some take a huge entourage even on official trips. Industrialists lend their private jets. Helicopters are used for short sorties.

Where do we draw the line and for whom?