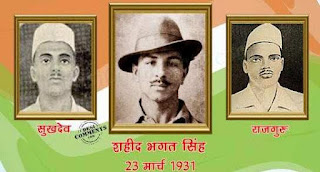 What do names of places mean? Is it an honour? Is it a sop? Why has Pakistan woken up to name a square in Lahore after Shahid Bhagat Singh? This has nothing to do with India. There was no Pakistan then. Bhagat Singh is, therefore, as much Pakistani as Indian.

Pakistani rights groups and members of civil society have demanded that the place in Lahore where freedom fighter Bhagat Singh was hanged should be named after him to commemorate his role in the movement for the independence of the subcontinent. Speakers at the rally described Singh as one of the pioneers of the struggle for an independent subcontinent.

So, what has this got to do with the present? The activists held a candle-light vigil (yes, one more) to get this done. These people are promoting themselves as anti-establishment, which is a bit strange. The freedom struggle had different dimensions. If they want to remember the place where he was hanged, then try and recall where so many public murders take place in Pakistan today for upholding values. He was hanged in 1931 along with Rajguru and Sukhdev, the latter two seen as satellites in both countries.

One cannot give it a nationalistic or even a religious or regional bias, for Bhagat Singh was quite publicly an atheist. This might seem unusual in Islamic Pakistan, but they have honoured a courtesan (real or imagined, no one knows) Anarkali with a tomb and also Malik Ayaz the slave-lover of Mahmud of Ghazni in bustling Lahore. As I have seen both, it gives an interesting insight into how history can lie in a corner without disturbing new conservative ideas.

The place most prominently in the news last year was Abottabbad, named after Major James Abbott who founded it. Kim’s Gun is, of course, named after the character from Rudyard Kipling’s novel.

I had a rather emotional moment when I visited the mausoleum of Allama Iqbal. We still sing “Saare Jahaan Se Achcha” written by him for ‘Hindostan’, but he is theirs. It is just so difficult to explain these apparently minor aspects that have made a home in our hearts.

It is true that as societies change, they want to sometimes wipe out the past. But we still remember places by their old names. I get particularly irritated when people say, “Oh, it will always be Bombay for us” about the city being renamed Mumbai. These same people refer to Beijing (originally Peking), Myanmar (Burma), but have problems adapting to our own cultural name changes – Chennai (Madras), Kochi (Cochin), Bengalaru (Bangalore), Odisha (Orissa). Many of these were in fact merely mispronounced by the British, so why do we get attached to bad inflections?

In cases where people have contributed to society, I do understand the need for commemorating. We have far too many Gandhi chowks, roads, memorials and those named after the Nehru family. That is the reason I was a bit jubilant when Mayawati performed her megalomaniac act. But are there no other ways to honour people?

Will Pakistanis discover the virtues of Shahid Bhagat Singh only because there is a chowk named after him? People don’t discover the past by walking down streets. The young depend on books, and those should give a true picture. And adults carry baggages that have to be lightened.