"I have been up against tough competition all my life. I wouldn't know how to get along without it." 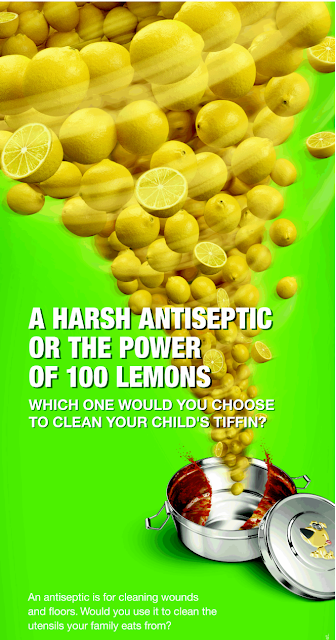 I woke up to the lemony flavour of this advertisement. I saw it coming when the ubiquitous antiseptic liquid that is a household name started airing ads for its new dish-washing liquid. All of us have learned to add a bit of it to clean surfaces, even in the bath; they diversified into soap and handwash and even though these did not smell of roses, we felt reassured that we were safe from germs. There is something like soup during a cold about it.

"Life is nothing but a competition to be the criminal rather than the victim."

The competition in the market could naturally not take this lying down. After all, it is about the home. It hit out by using the most vulnerable segment - children. The antiseptic became 'harsh' and your dear moppet's tiffin needed something that had the power of a Sachin Tendulkar ton, but gently.

It is an aggressive appeal and this time I think the ad has hit where it hurts. The soap and handwash segment were relatively fine with an antiseptic version around, for it would probably be the extra choice, the second wash, so to speak. You don't do the dishes twice over, and you don't want what mops your floors to touch your kid's tuck box.

As a regular user of the antiseptic brand, I think their strategy is to depend on loyalty. No one can compete with that.

I have cropped the picture to hide the name of the product and not named the antiseptic brand...because I just felt like it.
By Farzana Versey at 7:00:00 pm