Tea with the Nazi 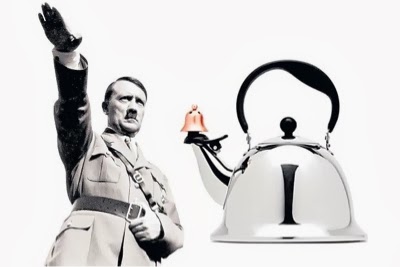 He still sells. Anger sells. It has buyers. However, are they "Nazi lovers"? A bit simplistic.

You must have already read about the JC Penney tea kettle that looks like Hitler and the reactions to it. They were forced to remove a billboard, but the damage, or publicity, had been done.

Those who probably did not need a kettle right then rushed to purchase it. Some are selling the $40 steel piece online for four to six times the price. It has become an investment.

The description of the kettle is that one can see the “handles as Hitler’s hair parting, with the lid being his moustache and the spout a Nazi salute".

Is this only about imagination or was it deliberately designed as such? A report quoted JC Penney from its Facebook page, “You won’t be able to stop yourself from whistling at us when you see this billboard off the 405 Freeway in LA!!! If you find it safely shoot us a pic if you can.”

Why would anyone want to whistle at a kettle? It seems obvious they knew what they had — whether by design or by chance. If it was the latter, then clearly it was a whoa moment and the kettle went right up there to claim its Calvin Klein moment.

It was a stripping of both sensitivity and political correctness. I wish they had gone along, for it would reveal facets of how we as a society treat history in a contemporaneous setting. Unfortunately, the page was removed and the Penny people said, “If we had designed it to look like something, we would have gone with a snowman or something fun.”

Given the sales and the bidding, it seems this is people's idea of fun. I do not agree it is about love for the Nazi leader or the Nazi credo, though. There are many souvenirs available. And the ideology, for whatever it was worth, is not quite dead if we extend it to the 'superiority of the race' theory. In almost every part of the world, there are groups that believe they are superior or better than others. These might span from religion to socio-economic policies, trend-setters, divas, the rich and in some ways the poor, who by virtue of their disenfranchisement are beyond the system.

Californians are known to be quite liberal, so it was surprising that the kettle billboard was forced down by its residents. Is anti-Nazism a way to assert liberalism? Isn't such a badge of 'we are more liberal than the rest' itself an assertion of superiority?

Let's talk about fun, then. It is possible that the buyers merely like something that has curiosity value. Some might enjoy 'Hitler' boiling, which says a lot about Nazism as a psychological phenomenon that has nothing to do with a specific ideology.

We aim darts. There is road rage. We need magnets and stress balls to keep ourselves in check. We use voodoo dolls and burn posters and images of hate figures.

Is this peaceful? It reveals our hate. Quite naturally, there is the value dimension of what is generally considered good and evil. However, the fact that good has traditionally been known to triumph over evil means that it went into battle. It gave a good fight and had its hands bloodied.

When we use figures like Hitler and Gandhi as opposites, we forget the nuances of how non-violence too chooses the self-destruction of a people. The leaders in both instances are safe. Incidentally, images of Gandhi too have got into trouble, because people don't like their heroes tarnished, when there is a whole industry that fools people by selling themselves as Gandhians.

Were JC Penney to use a look-alike of, say, Martin Luther King there would be opposition. Yet, people will use fridge magnets and other knick-knacks with his image. The same goes for pop celebrities. But, there is less of a reaction to a Marlilyn Monroe being used to sell products, and this also should bother us. Why do some people become public property and, only due to their profession, their memories can be treated with scant respect?

And, no, I don't see Hitler in that kettle. It looks like Chaplin to me.