Sartre was born today...was? is? 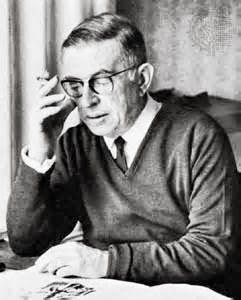 I said I was an Existentialist without quite knowing what it meant. Between the crevices of poetry and philosophy, my life was worming its way. I hid my growing teenage form behind big books – shy, afraid, unsure. Among those saviours was Jean-Paul Sartre.

I admit the initial fascination was for the great love story. Simone de Beauvoir seemed to be the perfect foil. It excited me to know that people could have open relationships. Later, I realised that such freedom does not prevent the tumult, the feeling of being tied down, of role-playing.

What Sartre gave me was intangible. An acceptance of nothingness. Confidence about angst.

But, was it just so pat?

“Anything, anything would be better than this agony of mind, this creeping pain that gnaws and fumbles and caresses one and never hurts quite enough.”

I recently told someone, “What pain is pain if it does not stay alive?” This is not self-destructive. The mind that keeps one agonising is what keeps one awake.

There are many views about Sartre, some accusing him of not being true to his own ideas. I prefer seeing it as ideas overtaking. He was not quite perfect, and would probably find the thought of perfection reprehensible. I am not providing a detailed essay on his works. I confess that at some point I outgrew them. He is indeed the pop star of philosophy – to my mind a strange mix of Woody Allen, T.S.Eliot and a brooding Marlon Brando.

I don’t want to go into a detailed discussion on Existentialism. I would have to agonise over it, for I am dealing with ennui. Sartre would comprehend this!

“Life has no meaning the moment you lose the illusion of being eternal.”

This is so complete. If I were to deconstruct it, then he has captured the very essence of existence. Survivalists may not wish to even go there. The moment we think of life as an open-and-shut case with death as the destination, then we are rather obvious pragmatists. And fatalists, too. The eternal does not exist in real terms, therefore one has to imagine it. Life cannot be defined, but it has meaning and value only if we know that it is a continuum.

And he said it best:

“That God does not exist, I cannot deny, That my whole being cries out for God I cannot forget.”