The lion and the vultures 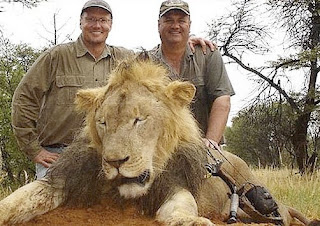 How different are the two pictures really? In one the man poses with his kill; in the other the industry caters to consumerist bloodthirst that feasts on the same kill.

I'll be honest. I found the moral high ground on the Cecil the lion story hyperbolic, and in many ways a pretence. And it had nothing to do with it overturning the fairytale where the ogre is the beast. There was just too much of reductionism going on — of race, of bestiality, of the hunter as sinner.

The American man who killed a lion in Zimbabwe became a villain everywhere; to boot, a white with a whiter smile. One news report even spoke about how it was discovered that the killer of Cecil "turned out to be" an American dentist. How was this a discovery or of any consequence?

Hollywood's avande garde voice and general conscience-keeper was so riled that she even posted the address of Dr. Walter Palmer's clinic. It became just another, what we Indians call, jungle raj.

It is important to question such trophy killing. We need to forget one ism to favour another in some cases, so not all animals are equal and indeed we would need to understand that animals in the wild play a different role. However, if we are going to talk about sensitivity, then why is it that we don't ever evince any such sensitivity when we see stray dogs rounded up in municipal trucks?

Now, there are Cecil memorabilia. It is not an environmental consciousness initiative but a commercial enterprise. Is Cecil the first one one to be ever killed? How did the "local favourite" become the pop favourite globally? Can people really tell one lion apart from another?

Instead of buying mugs and other paraphernalia with a lion face, perhaps we should all just stop visiting zoos, which is where the animals are slowly reduced in stature and where we learn how to recognise that what's behind a cage should be naturally game outside of it.
By Farzana Versey at 7:10:00 pm