We, the little people I can understand the usual speeches of politicians, but what makes us repeat the same old songs again and again as evidence of our patriotism? When will we get out of our gramophone existences and understand that a democracy thrives, in fact exists, because we need to question everything that appears to be free.

Our so-called nationalistic safety nets protect us from much of reality.

***
Let me post something I had written elsewhere back in 2009 about just such a reality: 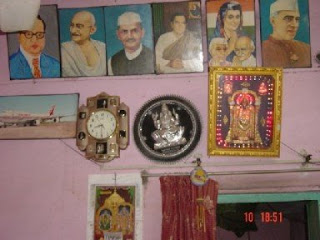 Last year I was involved in a slum project in Delhi. It was late evening by the time I finished the rounds. The group of hutment dwellers took me to what was supposedly the best little house in their midst.

They pulled out the only chair there was for me and this is what I saw on the wall:

The man of the house had no legs. He slid in on a make-shift 'cart'; his wife stood proudly next to him. I asked about the pictures, "What do all these have in common?"

He laughed and spoke in halting Hindi, "Kuchch nahin, lekin sab ko respect karna hai (Nothing, but one respects everyone)."

A whole lot of people had gathered in that little room, some spilling on the doorstep. Someone bought a cola for me. I was asked not to leave without having dinner with them. It was a touching gesture. I said, “Next time” and just so that they did not feel bad I started discussing the nuances of various uthhappams.

It was a South Indian family. I tried my little Tamil with them to much guffaws all round.

And then of course as I was leaving I said, with complete idiocy, "Vanakkam". It means welcome.

I may never meet them again, or I may. But even in that faux pas I think I had welcomed them into my little world as they had welcomed me.

They were fighting to preserve their homes that were going to be bulldozed. I have found out that they have won the case. I smile at the memory of that wall. I can only hope that walls too have memories.

***
Politically speaking, only walls seem to have memories.

As all the usual groups get celebrated on Independence Day, let me just sing for them the songs they won't hear: