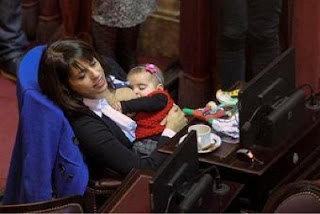 A woman breastfeeding her child can be a rather sublime sight, that is if she is not stared at. But does sublimity or subtlety even matter when the mother in the act ends up as an "internet hero"?

Victoria Donda Pérez is an Argentinian MP. She decided to breastfeed her 8-month-old daughter in Parliament, when the session was on.

Working women have praised her; her critics say it falsely conveys that women can have it all when that is not true.

Was she aware that her pictures were taken and would be in the media?  Assuming she is okay with it, I am not one bit impressed by Ms. Pérez's act on grounds of prudence as well as feminism.

Breastfeeding is a natural activity as are many others, some of which we might not even have much control over. We control them in a public space anyway. I am not comparing sneezing, breaking wind or picking the nose to nursing, but surely there could not have been such urgency to feed the baby. If anything, this comes across as terribly unprofessional.

This is not an issue about women's rights over their bodies; it is just that such rights as exercised in this manner convey that the woman has no choice. Even if we excuse the politician for elitism, the larger question is: is the woman a mother on the job? This just sends out the message about the feminised woman as the only one who can have any power, or acceptance.

Why are women applauding the "balancing act"? It isn't news that only a woman can bear a child and nurse babies. But such validation of 'balance' also unburdens the father of responsibility, and he will be the first one to call her superwoman.

Such a public act in a work place (as opposed to a park or even the office canteen) only consolidates the stereotyped role of a mother that deny her the option to make a studied choice — which could be fixed feeding hours at the office creche or collecting the milk for use at intervals.

Suppose this was not in Parliament, but a regular office conference. Would the response be the same? Unlikely. It only means that in some ways this is sought to be made into a political statement.

And it is no surprise at all that she has been nicknamed "Dipusex" (sexy MP). It takes a simple, natural activity to make a woman into a fantasy object. Women object to such labels on other occasions when they want to be recognised for their work or talent alone. How is it different this time? Is Ms. Pérez not being reduced to a pair of breasts, even if they are of a mother's?

The Oedipal implications are too obvious.

PS: In India, women from the labour class do breastfeed at the workplace on construction sites or in small industries. That is because the child is with them all the time.
By Farzana Versey at 7:58:00 pm