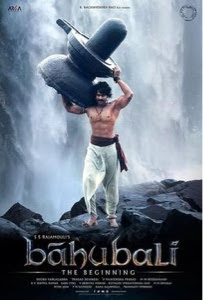 This Eid, in India, belonged to two films that essentially celebrate Hindu mythology.

At a late night show of 'Baahubali' on the day that celebrates the conclusion of Ramzan, we watched a celebration of Lord Shiva. In the audience were quite a few Muslims in identifiable clothes — caps, hijabs, even burqa.

Despite its obvious mythology it does not alienate those who might not follow its precepts. In that sense, it is a truly secular movie, and I say this despite my aversion for standardised norms of secularism, or of the fads surrounding it as well as the slurs it invites by way of spelling. No, it is not sickular! (A review will follow later.)

I have not yet watched 'Bajrangi Bhaijaan', but from what I've read and heard it is also simplistic and guileless. Here, a Hanuman bhakt takes it upon himself to unite a little girl who is Muslim and Pakistani with her family.

This qawwali here is something I've heard from better artistes, but just that moment when the protagonist breaks down as the music soars conveys that faith — religious or otherwise — is essentially about flowing.