No prayers for terrorists? 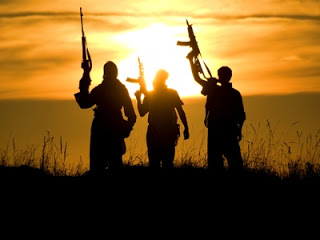 The Eid namaaz had just been offered. The maulvis at the Dargah Ala Hazrat in Bareilly in Uttar Pradesh issued a fatwa: say no burial prayers for terrorists and their sympathisers.


"On the pious occasion of Eid, the Sunni Barelvi Markaz send a strong message that no maulana, mufti or other religious leader will read the 'namaz-e-janaza' for anyone associated with terrorism in any form. By this, we want to lodge a strong protest against terrorism."


It is not surprising that this will be hailed among some sections of the intelligentsia, because this segment loves varnish. Also, it cares not for details.

Clerics are not germane to Islam; they are middlemen that have capitalised on the vulnerabilities of the devout. A Muslim does not need a religious leader to recite any prayers; it can be done by anybody — relatives, friends or wayfarers. The maulvis are pushing their own agenda, as they have always done to keep themselves relevant.

If they are so concerned about all that is good, why don't they issue fatwas against those who do not use medical assistance due to superstition? Because this will hit their business of exorcism and other trickery. Will a Sunni or a Shia maulvi issue a fatwa to the faithful not to discriminate on the basis of sect?

While terrorism is a huge problem, it also helps empty rhetoric to sideline more urgent terrors of daily living. The Times of India report spoke about other good fatwas by the seminary quite forgetting its own report of April this year when this same cleric had objected to a survey finding in which Muslim women wanted equal property rights.

Those who laud 'progressive' edicts should be protesting against the dragging of religion in what is a political matter. They too put the onus on Muslims to deal with terrorism, and ironically the pulpit that is often blamed for provoking violence is the one that gets away for ostensibly sending a message of peace.

How is the general public to recognise a terrorist when the police seem to have difficulty identifying them? Is that not why there are so many undertrial prisoners rounded up on mere suspicion because of their names or what they look like? What if a good Samaritan follows the good cleric's orders and implicates somebody as a terrorist supporter only because of a personal grudge?

Occasionally, the cleric is also a terrorist. If not for real, then by the sheer tactics he uses to promote himself. As for political terrorists, they aren't exactly roaming around in the cities and towns to recruit people who might offer the namaaz upon their death.