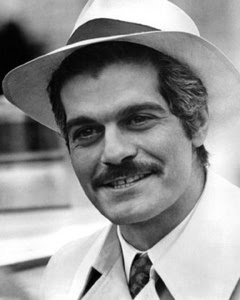 Much more than his face, I liked his voice, including the lilt. A bit woozy and timorous, it had the steadying quality of a sage. There was no choice left but to like Omar Sharif.

I watched him a few years ago in 3D at the Trocadero Centre. It was in a documentary on Egypt. He had become a bit stocky, and his face had spread out; the gap-tooth smile remained. As he stood amongst the mummified remains and history, it became evident that Hollywood might have embraced him but he continued to walk like an Egyptian.

In fact, part of his charm was his difference. Would the West have been as excited about him if he was called Michel Chelhoub, which was his real name? It was not the filmmakers that renamed him though. The actor himself wanted something that his fellow countrymen could pronounce, it seems. Why would they not, if it was a naturally Middle Eastern name? Was this a little trick he was given to play — not sure about himself so making things easier for others as a preemptive exercise? 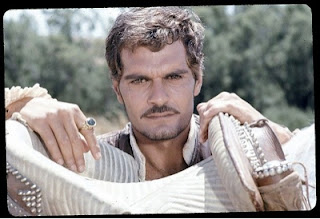 I did not start to write this with pop analysis. Like most, I found him attractive. However, what simmered was more beguiling than what was obvious. His much-feted 'Lawrence of Arabia' outing struck me as exotica overload. Dr. Zhivago did better, but morphing into a Russian for the Americans was exotic too.

Omar Sharif could have been Clark Gable in 'Gone with the Wind', and it is not surprising that the memorable line the character utters is, "Frankly, my dear, I don't give a damn." Sharif's casual charm certainly did not.

While my exposure to his cinema was limited, I assumed he had some political inclination, if not history. One reason was that his works were banned in Egypt after he was shown making love to a Jewish woman in 'Funny Girl'. That he and Barbra Streisand were also a couple made it worse. An Arab and a Jew? His response was a throwaway, “When I kiss a woman, I never ask her nationality or her religion.”

The Jewish question seemed to be of some humanist consideration for he went on to produce and act in the French film 'M Ibrahim et les fleurs du Coran' (Monsieur Ibrahim and the Flowers of the Quran); in English it was just 'Monsieur Ibrahim'. It is about a Jewish teenager who befriends a Turkish shopkeeper. I've watched it and its message stands out simply because it is not shouted out.

Sharif certainly had views on the region he came from, and he did not think much of America. In a land of upstarts, his old world refinement, and to an extend bacchanalian tendencies, were bound to feel adrift.

He lost money in casinos where he went because he was lonely, and it was one place where he could eat without being stared at.

I revisited this video after a long while and was once again struck by gems like, "Arab society is extremely tribalistic", "democracy is not the panacea", "I have none (religious beliefs) that I can prove"...and on his deathbed he said he would call out to his mother to take him...