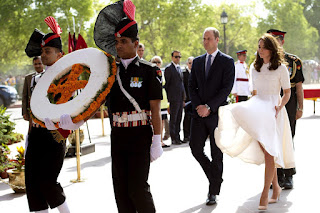 The summer breeze lifted Kate Middleton’s dress as she stood with Prince William paying their respects at the Amar Jawan Jyoti. The photographers who might have been clicking away also captured that. It made it on the front page of the Times of India, as well as to the international press.

One can pull up the TOI for many things, but as far as I am concerned this was not it.

Why does a candid moment cause so much consternation? I’ve read social media anthropologists and feminists huff and puff over this. Culling a few points I shall respond.

The newspaper was being asked, “Do you want to be Playboy?” Ridiculous. Is this pornography? Unless somebody gets excited it is not, in which case they have no business to get moralistic.

They complain that this was a sombre moment, and I suspect there was more outrage because it was at a memorial. Was she wearing a dress that was inappropriate? Not really, although I see the point of the advice Vanity Fair offered:

With pins like Kate’s who wouldn’t want to show them off? But at such an important and somber moment during the tour, flashing so much royal flesh wasn’t ideal. The Queen has small weights stitched into her hemlines to avoid such wardrobe malfunctions. Kate’s stylist might want to take note!

This was no a wardrobe malfunction; it was, if anything, Nature getting frisky. However, this is not about how she conducted herself, but how others did.

Not only were many of them reproducing the ‘offensive’ picture but also adding their own fantastical thoughts to it. Like, “If it had the opportunity, Times of India wudn't have hesitated from publishing an upskirt pic of Mother Teresa.”

Before the criminal newspaper even gets there, the male gaze has imagined the female form, and a revered one at that. Why not, say, South superstar Rajanikanth, who wears a lungi that is susceptible to the wind?

I am amazed at how easily people call out sexism by themselves being voyeuristic by reproducing it. It is justified as using it as ‘evidence’ to shame. There is too much naming and shaming, which only results in throwing darts during a local fair. 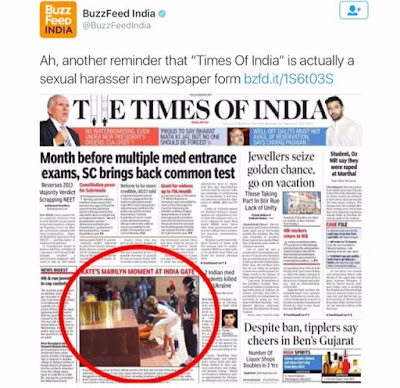 Buzzfeed, social media’s favourite historian on dope, had reproduced the front page and even encircled the picture to emphasise that this was sexual harassment. Stunning.

Online feminists, men and women, too use the term sexual harassment so loosely that it reduces harassment to some kitty party game. They complained that this was not a Marilyn Monroe moment because there was no choice involved here. Of course, there was not. Just as the photographers did not lie down on the floor or peep up (many concerned people in fact used stok photographs of children peeping up skirts to draw an analogy with bad boy TOI, forgetting they were misusing kids to suit their agenda). The Times photographers are not forecasters that they’d know when the wind would blow and the dress would fly.

Buzzfeed again carried a photograph of William’s coat from the back riding up to reveal his shirt. They care a lot about equality so they wondered why that did not make it to the front page. Probably because it was the back? Probably because Kate looks willowy when she is billowy? Had the media flashed Will, would they be discussing sexual harassment? What would have been their argument? And if not – which is the probability – then why?

On a related note, there was much praise for Kate Middleton wearing India-inspired prints, but an Indian actor would be expected to be an ambassador for the country even at sponsored events where they might go to market a product or a film, such as at Cannes.

Since there was talk about how the royal couple was so humble, could not this moment in the breeze be seen as part of them being human and fallible? But, no, these are largely supremacists whose high-mindedness will protect Kate Middleton's 'honour'. Had it been our own Mallika Sherawat or Rakhi Sawant's skirt flying they would be busy enjoying the memes.

And mind you, we are talking about people who use their mobile phone cameras to click sundry strangers at restaurants and other public places to make a point, to post on Instagram, to tell the world that they find others so funny, so disgusting, or to name and shame, never mind that they do not even know the name of the person nor will they care about the ‘issue’ once the picture gets its retweets and likes and they are honoured for the day as people with a conscience.