Salman Khan vs. Milkha Singh...
and the league of ranters “Imagine if the American contingent for the Olympics had George Clooney as goodwill ambassador!” stated the TV anchor, shock in his voice. He, and some of his panelists, were essentially foaming over the fact that actor Salman Khan has been chosen as goodwill ambassador of India for the 2016 Olympics in Rio. All hell broke loose. Why Salman? What has Bollywood got to do with sports? Is this not insulting to our sporting heroes?

While some sportspersons like boxer Mary Kom and shooter Abhinav Bindra seemed to welcome the move, former athlete Milkha Singh – the legendary Flying Sikh – did not. He said:

"I am of the view that our sportspersons, be those from shooting, athletics, volleyball or other sports, they are the real ambassadors of India who would represent the country in the Olympics. Still, if we had to pick an ambassador, it could have been from the sporting arena.”

Salman Khan is not representing any particular sport (and we do know about the sort of one-upmanship that exists among the different sports), so he is a neutral figure. Our players work under great stress not only on their skills, but in dealing with bureaucracy, harassment and pathetic facilities. We do not see many people raising their voices against these, not even the tall players who are now commenting about this selection and how wrong it is.

Here are some of the reasons dished out:

We cannot see beyond Bollywood.

If you spend a little time on social media or television, you will mostly see films being discussed. Yes, there is cricket and the World Cup football games, but since most are watching it on a screen, this too qualifies as, in a sense, a portrayal of the game. We see the players as characters with quirks, with different style statements. How often do you get deep analysis of a game completely devoid of these aspects?

Salman Khan had a simple thing to say after the announcement:

“It is a matter of great national pride that our athletes are performing better and better at the Olympic Games and I think we should all join hands in giving them every support and cheer for them so that Rio 2016 becomes our best Olympic tally.”

He is not replacing a sportsperson but an official.

He is promoting his film Sultan in which he enacts the role of a wrestler.

He has not said anything that might indicate it, but there could be soft marketing. Now, soft marketing takes place all the time if we consider the very ‘being’ of a celebrity as a public relations exercise. Sachin Tendulkar owns a restaurant; he could be promoting that. Mahesh Bhupathi has an agency to promote sportspersons; he could very well land a few deals. We can go on with this.

Human being are usually glamour-struck. That is the reason you get these angry comments. You think they would have bothered if a fairly unknown sports star was appointed goodwill ambassador and somebody had an objection to it? Does anybody even remember who the earlier goodwill people were?

Salman has a criminal and bad boy image.

He does. [Just a thought: Would Americans cry foul if Tiger Woods – bad boy and sportsman – was chosen to represent the US?]

Salman has been to jail for shooting black bucks and when his car killed a pedestrian and injured three others. In the latter, the courts have let him off. There is no excuse for either of the crimes, to whatever extent his direct involvement may be. But, in all these years he has acted in and produced films that went on to become huge hits. Do all those who are raising his criminal image now not watch his movies?

If we ask how can such a man represent India, then we should also ask how can we permit so many MLAs and MPs from sitting in Parliament. Who is voting for them? Do we raise our voices enough? No. We aim at the softer targets. Salman Khan has clout, and he must surely be using it. But in comparison to the political leaders, he is fair game.

And to think some people in the media take a high ground on this. These people whose newspapers and TV channels promote politicians and their photoshopped lies, real crimes too, should be the last people to object.

When was the last time people mentioned Milkha Singh, whose honour they are so frenziedly protecting now? It is ironical that it took a Bollywood ‘insult’ for them to wake up to the legend.


Here, let us break this down. In the first he is just expressing distaste for the term ‘Bollywood’ that is often used pejoratively. As an award-winning screen writer, he is permitted to be protective of his industry.

It is the second statement that has caused problems. They say he is being arrogant, and how dare he suggest that a figure like Milkha Singh needs Bollywood.

If we are a little honest with ourselves, the truth is, yes, Milkha Singh as many of this generation know him, did come alive in the film Bhaag Milkha Bhaag. There can be no doubt that it resurrected him, unless we want to bury our heads in the sand or just pretend we can barf nonsense as long as it sounds ‘moral’. 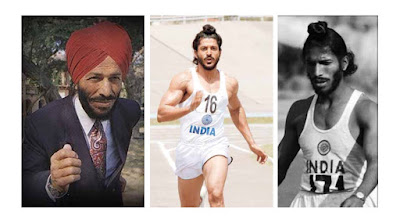 Milkha Singh was fully involved with the movie on his life. It was fascinating to see Farhan Akhtar transform into him. The athlete did not charge anything for the rights. He asked for a token mount of one rupee. The filmmaker Rakeysh Omprakash Mehra arranged for a currency note issued in 1958, the year in which he won the gold medal, a first for India, at the Commonwealth Games.

I do not understand the argument against the film earning crores “on his life”. This was not some sneaky production; he was a part of it. Indeed, the film had to make money because the producer spent on it. Milkha Singh had a choice to demand money. It is said that he was upset because he was expecting 10 percent of the profits. Since it was in the papers, how come none of his now-vocal supporters took this up on his behalf?

There are other sports biopics. We had one on Mary Kom, and there is one on Mahendra Singh Dhoni. Dhoni was paid Rs. 80 crore and Mary Kom Rs. 25 lakh. It is obviously all skewed, but it has a lot to do with economics. Incidentally, both of them do enjoy being as glamorous as film stars. It was surprising to see Ashwini Nachappa questioning Salman’s choice; she herself had tried her hand at acting in films, as have a few others.

Many would not remember, or might not have been born then, but some decades ago when P.T. Usha was riding high a news magazine, India Today, had got her all dolled up for a feature. They too needed to grab eyeballs using glamour.

It is possible that under pressure, the Olympics Association of India decides to withdraw Salman Khan or the actor might do so himself. It would be interesting to see what happens next. If one goes by the general slovenliness of our new sports lovers, they will go back to their organised lives, smirking at the ‘fans’ when they are the ones really obsessed with celebrity.