London’s Mayor and his White Knights
-The Wrath of Khan

[Published in CounterPunch, May 11]

The new mayor of London has been asserting from every podium available that he is the mayor of all of London to ensure they do not imagine he merely represents some kebab corner in Hounslow or other Outer London hub where many of his fellow Pakistanis live.

That is the least of his problems, for he wears all the distinguishing identity marks with some confidence. In the ceremonial position of mayor, however, he is being made to hold forth on ‘Islamic terrorism’. Worse, he is playing ball, as they knew he would. 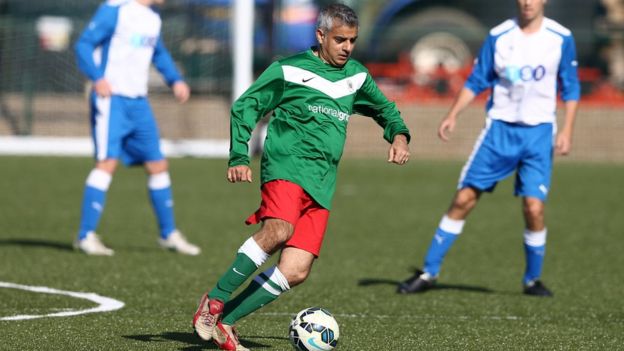 “One of the things that’s important to me as a Londoner is making sure my family, people I care about, are safe. But clearly, being someone who is a Muslim brings with it experiences that I can use in relation to dealing with extremists and those who want to blow us up. And so it’s really important that I use my experiences to defeat radicalization and extremism. What I think the election showed was that actually there is no clash of civilization between Islam and the West. I am the West, I am a Londoner, I’m British, I’m of Islamic faith, Asian origin, Pakistan heritage, so whether it’s [ISIS] or these others who want to destroy our way of life and talk about the West, they’re talking about me. What better antidote to the hatred they spew than someone like me being in this position?”

Mr. Khan believes that by virtue of being Muslim you become an expert on extremism and an electoral victory in one small part of the world is enough to shake the terrorism fortress. He is mouthing the clichés they love to hear.

That is the reason even Donald Trump says he will lift his ban on Muslims for him: “There will always be exceptions”, adding, “I think [his election] is a very good thing, and I hope he does a very good job … If he does a good job and frankly if he does a great job, that would be a terrific thing.”

But the mayor is not biting:

“This isn't just about me - it's about my friends, my family and everyone who comes from a background similar to mine, anywhere in the world…Donald Trump's ignorant view of Islam could make both our countries less safe - it risks alienating mainstream Muslims around the world and plays in to the hands of the extremists. Donald Trump and those around him think that western liberal values are incompatible with mainstream Islam - London has proved him wrong."

It is good that Khan made his position clear (this was before the TIME interview), but then Trump is considered a political buffoon and fair game. Khan would be circumspect before the supremacists in his own backyard. Somebody has to break it to him that not only his opponents but his supporters too tag him with the M word. They believe they have saved him, not themselves, from his main opponent the Conservative Zac Goldsmith who ran a vicious bigoted campaign. They are patting their backs by concluding that this choice proves there is no place for racism in London.

It is not as simple as that. Congratulating Khan, Jemima, Zac Goldsmith’s sister, did not fail to mention that he would be, “A great example to young Muslims.” Some say it is a blow to the ISIS. Echoing the western prototype, Yasmin Alibhai-Brown wrote:

“A Khan victory would also demolish the extremists’ anti-western narrative. If a Muslim can be elected by millions of voters of all backgrounds to take charge of the world’s greatest city, how would the jihadis – how could they – carry on believing and arguing that we Muslims have no future in Europe, or that westerners hate us? This victory could do more to combat radicalisation than any number of government strategies – most of which are in any case unjust and counterproductive.”

The extremists’ reaction is 1) to assert supremacy 2) to take revenge. The first is a fantastical and fascistic idea, as upheld primarily by the ISIS. With the other category, where terrorism is a social phenomenon, the future of Muslims in Europe inspires them little. It is the future of and for their homelands they fight for, however faulty their methods.

Ms. Alibhai-Brown’s analysis spins the good vs. bad Muslim by attributing Sadiq Khan’s victory to westerners’ love as opposed to hate. Perhaps unintentionally, she also conveys that all that potentially radicalised people need is a lollipop from the aforementioned loving westerner to the good Muslim. The hyperbolic response to Khan from the liberal is perhaps precisely because it is a ceremonial post and a little symbolism costs nothing and hurts nobody.

Sadiq Khan chose to attend a Holocaust memorial event on his first official outing because it is, “So important to reflect, remember and educate about the 6 million Jewish lives lost in the Holocaust.” Indeed, Holocaust deniers contradicted him. But it is the anti-Islamism that he will have to deal with: “The cult followers of Muhammad have killed 270 million people in 1,400 years.”

Even with the diversity he brings along and stands for, including his background as son of a bus driver and seamstress who shared a little home with seven siblings or his voting for gay rights, his biography as written by them carries one buzzword: Muslim. The subtext is that they have legitimised him despite it.

The counter-query, “When will a non-Muslim get a position in a Muslim country?” itself reveals that such positions in the public imagination are perceived as handouts. Multiculturalism cannot exist in a theocratic state. And Britain – despite the new Catholic Tony Blair reportedly praying to god when deciding whether or not to send British troops into Iraq – is still not quite there.

However, in Sharia-compliant Pakistan a Hindu did become Chief Justice. And westerners, including those from human rights organisations, are quasi mayors and sheriffs of the lands they hope to reform.

Sadiq Khan is mimicking this module by using successful Muslims as role models so that “when somebody comes along and tries to brainwash them (the youth) with a sort of nihilistic view of life and say the way to get success in this world and the hereafter is to get a Kalashnikov and go to commit — in inverted commas — jihad is to say, ‘you know what? That’s not true’.”

It is rather uplifting to know that way beyond the call of duty the mayor of London has plans not only for the city but the hereafter of his co-religionists. Sadiq Khan has been nicely coopted and saved from a pyrrhic victory.
By Farzana Versey at 7:30:00 pm